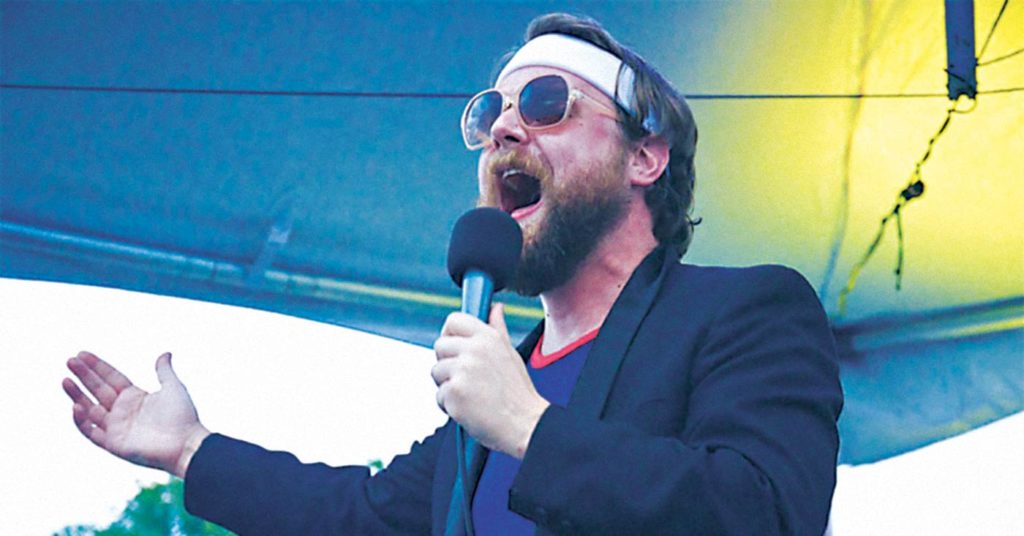 Alexander Smith’s sharp, satirical solo project Howell Dawdy bounces from pop to hip-hop to country. He isn’t your average wordsmith and “I’m Done” is a prime testament. The song concerns itself with the shared and universal reality that life can, at times, be a bit too much to bear, and that taking a step back is often the only way forward in an answerless world. With Smith at the helm, it’s relayed in an almost uplifting way, with humorous swagger and sharp irreverence.

“‘I’m Done’ is an anthem for giving up,” Smith said. “Which is something I believe in pretty strongly. If any of the mundane hassles in your life are dragging you down, just quit doing them. Go sit in your car and eat a bag of powdered donuts. Or do whatever you want, or don’t do anything. That’s my approach to life and music.”

While a Dawdy song is always recognizable, “I’m Done” has an earnest, ear-worm formula. The song stutters in on a sampled bedrock of early-’00s electro-pop (which is also an integral part of the soaring slur of the chorus), before settling down to a sparse and twitchy mid-tempo backdrop for the dropping of Smith’s poetically-framed truth bombs of life.

“This song had a long gestation period,” he said. “The music is an old instrumental track I made almost 10 years ago, which was itself a chopped-up remix of a song I had recorded on guitar a few years before that. The computer I wrote it on crashed, without me backing it up, so all I had was an old MP3 of it, which I tried to add lyrics to several times. This time it worked.”

If you’ve heard any of Smith’s material before, then you’re aware of his particular wordplay, which looks at the world from an idiosyncratic angle, with a little Mark Twain with a modern twist to it. “I’m Done” is a torch bearer of that tradition with lyrics like, “I’m done with people’s opinions and I’m done with not being heard / Though I’m also done with people listening and scrutinizing every word / I’m done with people telling me my attitude is what I’ve got wrong / Like it’s my fault I don’t live in a Tim McGraw song.”

“My big songwriting secret is that you can just make a list of things,” he revealed. “If you act like it’s a song people will accept it and call it a song. So just make a list.”

“I wrote the words and recorded the vocals very quickly,” Smith continued. “At the time, I had been waiting to compile enough songs for a second mixtape, but when I finished this one I realized I had a pretty decent full-length album. So ‘I’m Done’ seemed like a good title for the album since it also refers to being done with the album. And if that isn’t interesting, I am very sorry.”

But Smith is, it would seem, not one to leave things open-ended as he concludes the interview with his trademark dry-wit precision.

“And I have nothing more to say.”

So, in other words: he’s done.