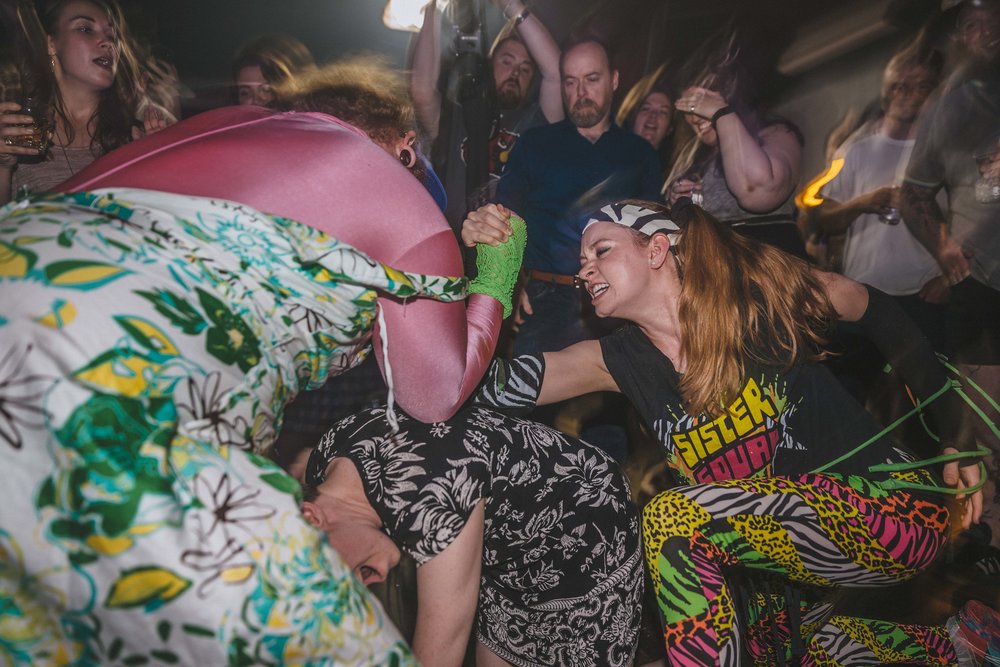 Louisville actor and director Gracie Taylor is unaccustomed to being booed and hissed on stage. Modern theater audiences, after all, are an inhibited lot. Just getting them to laugh at an obvious punchline often requires the acting equivalent of a standing ovation. Booing is simply out of the question.

Besides, the moral universe of modern drama doesn’t go in for the white hat-black hat/good guy-bad guy divide. Everywhere, there are shades of gray.

Everywhere, that is, except in the tumultuous world of Louisville Championship Arm Wrestling, a theater company unlike any other. LCAW is all about the red meat of storytelling — and over the last four years the ensemble has constructed a tangled universe filled with good guys (baby faces) and heels (bad guys) whose battles are fought in the world of arm wrestling.

You might think of it as a theatrical corollary to the Marvel Universe — except that performers are in the room with the audience, and there’s a visceral energy that flows between performers and their vocal fans.

In the LCAW Universe, Gracie Taylor and actor Jessica Hines are sisters, Pearl and Ginger Dungle, who arm wrestle as The Sister Squad.

Their father is Buck Dungle, who owns LCAW (the fictional LCAW) and founded LCAW (the real world theater troupe) with Jake Allen Miller, who plays Gino Grigiot. Grigiot, by the way, is a conniving Napa Valley villain known “the Sommelier of Sleaze.”

The Sister Squad has a long been a crowd favorite. The Dungle Sisters are noted for their “spunk,” “exuberance and squeaky clean adherence to the rules of the sport. But in a championship match last year, they met up with equally popular paragons of virtue, a twosome called Los Muertos Verdes, consisting of Chingaverde (Edwin Breton) and El Death (a masked wrestler whose identity is a mystery).

“We’re used to people cheering for us,” said Gracie Taylor in a phone interview. “But Los Muertos Verdes has lots of fans. Being booed was something we’d never experienced before — and it was nerve-wracking.”

But there is no crying in arm wrestling — as far as I know. And the Sisters prevailed against their male opponents. But they face a tough rematch against the same team this Saturday in “Arm-Wrestle Mania 3: Brave New World.”

This week, the tension escalates as the twosomes contend in a classic “ladder match.” In these matches, two contestants arm wrestle while the other two ascend the rungs of a step ladder in a quest to retrieve the championship belt.

“Arm-Wrestle Mania” is the key annual event in the LCAW Universe, and if you’re new to LCAW, it’s an excellent opportunity to get up to speed. There are three other major matches on the schedule.

In another match, Grant Canyon (Nick Milby) meets Trone (Jason Petrone) in a high-stakes contest, where, if Trone wins, Canyon will lose his LCAW contract and if Canyon wins, he will replace Trone in the LCAW Hall of Fame.

And in The Melinda Childbirth Invitational Gauntlet Match for the LCAW World Heavyweight Championship, reigning champ The Emperor Galactus (Joshua Carroll) will defend his belt against a gauntlet of 14 opponents. The last arm standing will win the belt — so the question is whether the evil, unscrupulous Galactus can hold out against the entire roster.

That’s the published roster. But the LCAW universe is notoriously unstable, so it’s possible anyone could show up at any time.

If things run in an orderly fashion, expect the event (which runs as part of the Flea Off Market) to run 90 minutes or so. And if you’d like to get a sense of the action, go to the website listed below and check out LCAW’s youtube channel.

This is a strong production of a script that poses some structural problems for a director. The first half opens with a nicely executed filmed preface (by Hannah Hoopingarner) that sets up the brutal world these salesmen inhabit (that scene was written for the movie, but has become a customary addition to the staged version). Then the play spins out in physically static (though wonderfully-written) restaurant scenes that lay the intellectual groundwork for the fraught action of the second half.

Taylor and company did a fine job of tapping into the dark spirit of the first half, they came to life — as I think nearly all casts do — when fully unleashed in the fast-paced, tumultuous second half. That second half catches fire when Logue (Ricky Roma) and Byars (Shelly Levene) team up against Socolick (hapless remorseful customer James Lingk) — and have him on the ropes until Calvano (the office manager John Williamson) fouls their play.

It’s not clear to me that staging this play with a cast of women reveals anything new — about the play, about women, about the world of cutthroat sales, or about America. But inasmuch as it opens interesting and challenging roles to performers who otherwise wouldn’t get to perform them, I’m all for it.

Commonwealth Theatre Center’s Young American Shakespeare Festival finished its run last weekend, and I was able to catch “The Tragedy of Richard III,” directed by Heather Burns. I always marvel at Shakespeare’s women in this play, and this production was no exception. Great work her throughout, but there was terrific work by Shannon Bradley (Duchess of York), Zoe Peterson (Queen Margaret), Cicely Warren (Lady Anne) and Samantha Bliss (Queen Elizabeth). Joseph Heberle was memorable as Richard’s doomed strategist, the Duke of Buckingham. And Will De Vary’s approach to Richard was cunningly crafted to create an unusually intimate bond with a ruthless man.