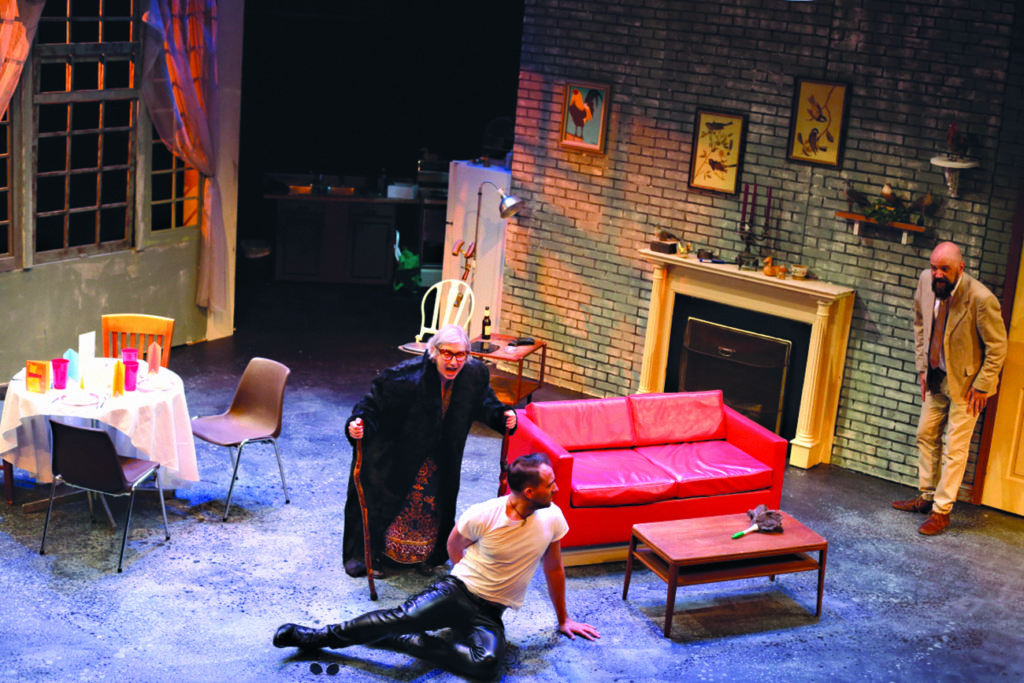 L-R, this is Laurene Scalf, Remy Sisk, and Brian Hinds in ‘Fastest Clock in the Universe.’ Photo by Richard McGrew.

Over the course of three seasons, Artistic Director Tony Prince has established Liminal Playhouse as an edgy, risk-taking company willing to bring to stage some of the most adventurous scripts in the modern repertoire. It’s a company that thrives on heady, thought-provoking topics and novel approaches to storytelling.

With Philip Ridley’s “The Fastest Clock in the Universe,” which opened last weekend, the company builds on that reputation with a stunning — even shocking — production of a 1992 British play that was controversial from the start and is rarely staged in the U.S.

The action revolves around a birthday party for Cougar Glass (Remy Sisk), a Speedo-clad, narcissist so profoundly afraid of aging and the passage of time that clocks are forbidden in his presence. His obsession with preserving the appearance of youth requires regular grooming from his partner Captain Tock (Brian Hinds), who plucks hints of gray from the back of his head.

Birthdays for a guy like this are not necessarily cause for celebration, and when a hint of aging throws Cougar into a mad tantrum, Tock recruits their elderly landlady, the fur-clad Cheetah Bee (Laureen Laurene Scalf,) to calm him down. In a brilliant, chilling scene Cheetah croons a litany of differences that differentiate her stale, weary body from his fresh, new one. It’s a horrid little lullaby that eventually rocks Cougar back from his panic.

It turns out that Cheetah always wears furs, no matter the weather because her husband was a furrier whose factory was located in the building.

For his birthday, Cougar has invited — or, perhaps, one might better say lured a guest, Foxtrot Darling (Trystan Bright-Hadley). To Cougar’s chagrin, Foxtrot is with his newly-betrothed girl, the chipper, clever Sherbet Gravel (Megan Adair).

What ensues is a magnificent, no holds-barred drama that melds ruthless verbal combat, physical and emotional seduction, wacky party hats, cake and candles, a knife, an inspiring fable and a grim tale about the fur trade that will haunt your memory.

The script itself is a marvel. And the performances that Prince elicits from this cast are bold and uninhibited. Sisk wraps layers of oozing, callous arrogance around Cougar’s defining fears. In a perfectly calibrated performance, Hinds explores the cautious resentment that underlies the character’s submissive infatuation. Bright-Hadley and Adair are charming as the apparently clueless happy couple — until Adair unleashes her character’s wily grasp of reality. And Scalf is a pure marvel as the landlady who first comforts Cougar — and then horrifies us all.

‘The Fastest Clock in the Universe’
by Philip Ridley
Through June 3
The Henry Clay Theatre
604 S. Third St.
theliminalplayhouse.org
Times and prices vary

After the New Hampshire presidential primary in 1992, Bill Clinton famously labeled himself “The Comeback Kid.” But the true Comeback Kid of U.S. politics in the 20th century was Richard Nixon, who first salvaged his career in 1952 by invoking a cocker spaniel named Checkers, managed to serve a second term as Eisenhower’s vice president and survived a losing presidential race in 1960 and a losing gubernatorial race in 1962 — but then somehow managed to regroup, win the presidency in 1968 and win reelection by a landslide in 1972.

Less than two years later, in the face of the Watergate scandal, he resigned in order to avoid impeachment.

Three years later, Nixon tried one more comeback. His life in politics was over, but he longed to revive his reputation. So he agreed to series of television interviews with another guy whose career was on the ropes, celebrity journalist (and sometime comedian) David Frost.

“Frost/Nixon,” the 2006 play by Peter Morgan, is a dramatized (and slightly fictionalized) account of the planning and execution of those interviews — and the current Alley Theater production, directed by Denny Grinar, is an engrossing look into an incident unlike any other in American history.

Herschel Zahnd is a near-perfect Frost. Coiffed and dressed for the period, he plays the role with a breezy, casual surface that masks a resilient, dogged spirit and the tenacity of a bulldog.

Having invested his personal fortune in this risky piece of what some called “checkbook journalism” (Nixon was paid $600,000 for the interviews — big bucks in 1977). Frost recruited producer John Birt (Francis Whitaker); writer-researcher James Reston Jr. (John C. Collins); NBC news producer Bob Zelnick (John Rocchi); and Frost’s girlfriend Caroline Cushing (Jennifer Riddle), whose character in the play lacks substance, but who in the real world was an editor for The New Yorker and Vanity Fair.

Anyone who lived through the era brings baggage to this play — and will likely carry the same baggage home. But this wonderfully executed production — with vivid, detailed performances by all the players -— takes us behind the scenes of this episode: The play is largely based on Reston’s book about the interviews.

For both sides, this was a high stakes battle of wits. As the two sides strategize, we see the back-room tensions. And when they clash, the drama reveals — or at least suggests — insights into Nixon’s inner workings. J.P Lebangood is a looming presence as Nixon. He captures the essence of the disgraced president’s physical and verbal mannerisms, his calculating intellect, his venality, his brooding, prickly social discomfort, his lifelong sense of victimhood and his abiding urge to rehabilitate his reputation.

Even if you know the outcome of this story, the turning point and its aftermath makes for powerful theater.

I’ve never seen a stronger debut by a theater company than the Faith Works Studios production of August Wilson’s “Fences,” which last weekend closed its run at the Russell Theater — an excellent new venue in the former Madison Junior High School at the corner of 17th and Madison streets in the western part of Louisville.

In fact, any company in the city would have been proud to present this riveting production of a modern classic. Director Kristi Papailler’s cast nailed this play and sold-out houses saw marvelous performances from a brilliant cast headed by Alphaeus Green Jr., in a majestic performance as the flawed, but inspirational, Troy Maxon, a former Negro League star who supports his family as a garbage collector. As a player, Troy swung for the fences, and now he’s still a leader, fighting racism at work and ruling his family as a paragon of discipline and personal integrity.

But he’s also a human. And though he never loses his nobility, he lapses into a love affair that threatens his marriage to Rose (LaShondra Hood) and diminishes the moral authority he holds over those who respect and admire him: his young son Cory (Isaiah Archie); his free-spirited jazz-playing son Lyons ( Antonio “T-Made” Taylor); and his admiring co-worker Jim Bono (Sadik Ibn-Mohammad). But the affair brings yields a measure of unexpected redemption: a daughter named Raynell (Channia Banks).

This was a supremely confident cast taking up a great play and delivering it with as much authority as I’ve seen in some Equity productions of Wilson’s plays. It was also a technically-accomplished production with: Gerry Kean, scenic design; Martin French, lights; Claudette McCracken, costumes; Reginald Johnson, wig and hair design; Morgan Younge, wardrobe; and Nate Beckham, sound.

I regret that the company wasn’t on my radar, and I didn’t attend the first week of the run. I won’t make that mistake again. They’re running “Steel Magnolias” with an all African-American cast in June. My advice is to add Faith Works Studios to your social media contacts. The website is faithworks-studios.com •