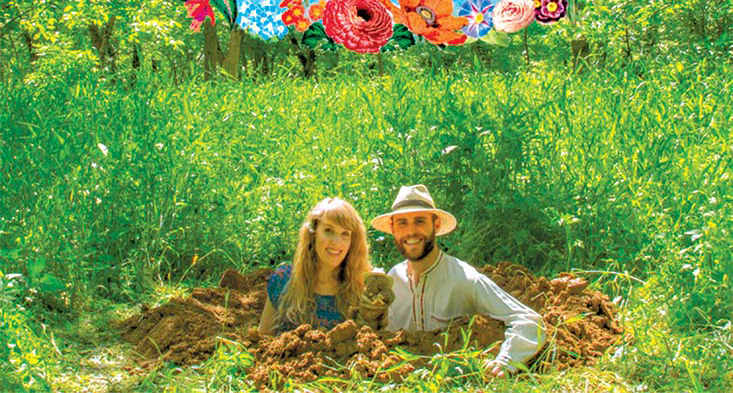 Evan Blum and Vanessa Richmond want to change how you think and feel about children’s music, especially if you’re a parent, since the genre is generally shunned by adults.

And their latest release “Sun Sun Sun” is a song that could please anyone of any age, employing easy-on-the-ears, Beatles-esque melodies and a peaceful strum, complemented with lyrics that develop a larger meaning behind a seemingly simple idea.

“It’s kind of a perspective song,” Blum, co-writer and multi-instrumentalist, said. “The first verse is about a very close and intimate relationship with the Sun. The next verse kind of takes you outside, but still in the immediate surroundings. The chorus travels to a larger perspective, where suddenly you’re seeing the entire world from space.” This is perhaps the most important part, according to Blum: “So you see that the Earth is traveling around the Sun and that everyone around the world is experiencing it at some point. Just because you can’t see the Sun doesn’t mean its not there.”

While, admittedly, their core audience is children, Blum and Richmond are working to blur the line between real music and children’s music. “Sun Sun Sun” uses very simple, though certainly graceful, lyrics and structure, similar to many children’s songs, but it also doesn’t veer far from what would be considered an adult-oriented song. It’s a frustrating dichotomy for the duo, and “Sun Sun Sun,” they’re hoping, is a step forward in achieving a balance between both worlds.

“When kids’ music is written or talked about, it’s usually approached from a negative perspective,” Blum said. “It’s not something that a lot of the times people even think to genuinely enjoy. But we feel like if you have children, and you actually enjoy a song for your own reason, and they do as well, then the bond there is more personal and intimate than if you’re just tolerating the music.”

In addition to their view on children’s music, Blum and Richmond also seek to extend musical connections through language. The soon-to-be husband-and-wife duo believes in providing both music and a “welcoming and comfortable” atmosphere in which to listen to it. As a part of this, they have simultaneously released a Spanish version of their song called, naturally, “Sol Sol Sol.”

“Vanessa is a native Spanish speaker, so we’re definitely trying to use that for this song,” Blum said. “We want to bring different communities together, to try and bridge the different areas of town together. We’ve had some shows that we recognize a lot of faces from those areas. It’s beautiful to see. I feel like usually there aren’t too many opportunities for them to come out and feel welcome and comfortable in other areas of town.”

Richmond agreed: “It ties together what we’re doing as a whole, bringing everyone together. We want to make things that are personal when you listen to them, but also universally understood. That’s why the sun is such a good example, and why it works so well in Spanish and English. It starts in someone’s home and moves farther and farther out and you see how it all connects.”