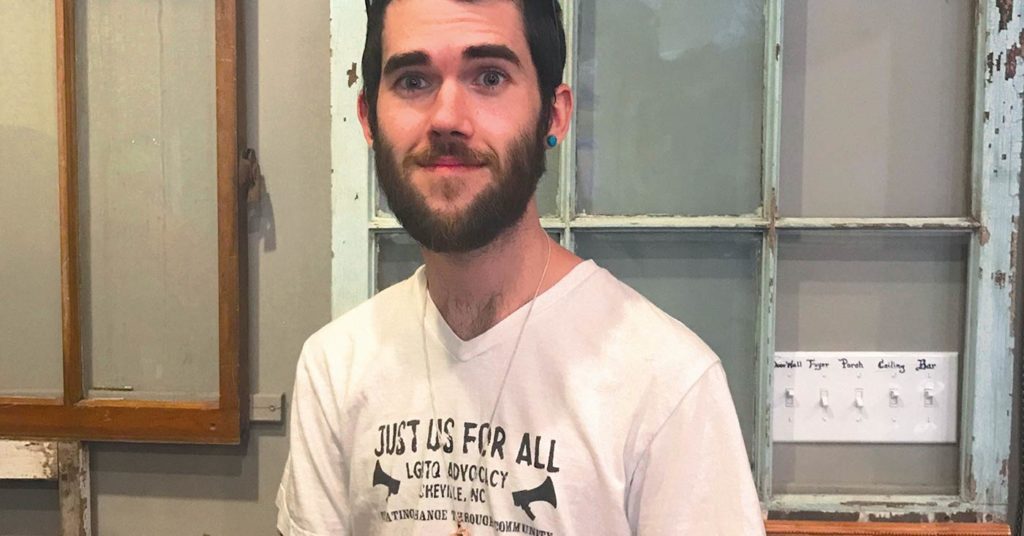 Tylar Saur, who was fired from an Elizabethtown business for wearing a T-shirt championing LGBTQ rights.

Five days a week, I commute from my home in Louisville to my place of work in Elizabethtown, Kentucky. People constantly question the wisdom of my decision to commute — after all, E-town is a lovely city. It has a Target, liquor sales are at last legal, and Louisville is just a 45-minute drive, should I ever want to visit.

Queer folks in Elizabethtown never ask why I prefer Louisville. They know that when it comes to welcoming LGBTQ people, E-town and Louisville might as well be different planets — something that queer folks outside Louisville city limits sometimes forget.

This gap was perfectly illustrated last month when Serena Erizer and Lori Smith of Vibe Coffee/Herb & Olive took aside employee Tylar Saur and explained that Saur’s LGBT-event-related T-shirt made them uncomfortable. After another employee — manager Julia Lynch — argued the admonition could be viewed as discrimination, Erizer and Smith fired them both.

At the time of the incident, there was no dress code in the store, and employees frequently wore T-shirts with words on them. After Saur’s discussion with the owners and the later conversation between the owners and Lynch, Smith and Erizer fired Lynch and told Saur to go home and sit tight. Lynch recorded the second discussion, which the Fairness Campaign has posted.

At no point did Saur indicate a refusal to follow the dress code that the owners suddenly wished to implement. Saur did point out the irony that the T-shirt in question was for an event that worked to stop acts of violence against LGBTQ citizens that were happening in the Asheville, North Carolina area. The shirt, Saur said, wouldn’t have existed if it weren’t for homophobia.

Saur never heard from the employers again, despite reaching out several times. Erizer and Smith disposed of the situation the same way I dispose of a newspaper when I’ve made a mess of the crossword puzzle — but people aren’t newspapers. Saur deserves better than to be tossed aside because someone else is uncomfortable, particularly when that discomfort is based on misinformation and prejudice upheld by the people who make decisions

In learning the details of how it went down, it becomes clear that the main conflict came about because somehow, in 2018, there are still people who know nothing about their LGBTQ neighbors and are instead eager to assume the worst about them.

Erizer and Smith didn’t break the law. Business owners obviously have the right to institute a dress code, and the law doesn’t prevent such a firing simply because an employer thinks that an employee might be gay. Federal and state laws do not prevent it, and E-town is not one of the nine Kentucky cities including Louisville that has fairness ordinances.

The reach of the gay agenda has been greatly exaggerated.

But that doesn’t make it right, and that’s why fairness ordinances are so important. LGBTQ folks certainly need equal access to housing and employment, but we should also be spared the humiliation of confrontations like the one Saur had at Herb & Olive.

While full of suspicion toward the LGBTQ community, leaders dismiss needs for protections because “there is no discrimination here,” said E-town fairness leader Mary Rigney.

Erizer and Smith share this opinion — while they declined to talk with me, they provided me with a leaflet that states: “We do not discriminate.”

Saur’s shirt commemorated the Asheville event that protested violent attacks on LGBTQ citizens, but Saur’s employer’s response, according to the tape, was “if you want to come in and wear something about your church, you are welcome to, but don’t come in telling me how you like to have sex.”

See how quickly ignorant communities are to make LGBTQ people into sex-monsters and perverts? They don’t understand that LGBTQ insignia is about culture, not sex. It’s about semiotics: markers to signal safety and acceptance and they’re not obscure anymore. Most people can spot them. But not in places like Elizabethtown.

When the incident first occurred, Erizer and Smith met with the Heartland Progressive Alliance, a local group of progressive activists, to discuss the matter, and, although they didn’t reach a resolution, their conversation revealed an enormous disconnect between the two sides of the LGBT debate.

Josh French, who is Heartland Progressive Alliance chair, told me that Erizer showed the group, as proof of Saur’s shocking character, a photo from Instagram showing Saur wearing a T-shirt with a pink triangle on it. When the group showed no reaction, she explained that she had researched it and discovered that the triangle commemorated the gays killed in Nazi Germany and was a sign of gay pride. The Alliance members didn’t understand why this was scandalous — nor do I — and Erizer may never understand why it’s not scandalous to the rest of us.

Nor does she understand the double-standard. Lynch said Erizer can be heard saying on the tape: “We’re not going to walk around talking about how we view our sexual orientation. And really, you can make the argument about it all day long, but I don’t walk around saying, ‘I have a husband, and I am his wife’”

She apparently does not understand how much straight people take for granted things such as using their cars to display stick figure families and “I <3 my husband” stickers, or casually using the phrase “my husband” or “my wife” in conversation. These mentions are invisible to them — they certainly don’t feel like proclamations of heterosexuality.

I’m betting those things don’t seem sexually explicit to Erizer, and neither should Saur’s T-shirt.

Queer people don’t deserve to be treated as provocateurs just for existing.

One reason communities such as Elizabethtown are still like this is that local government, schools and churches are hopelessly entwined, and people are genuinely afraid to speak out. I chatted with a Vibe Coffee customer outside the business who was shocked to hear what had happened. She expressed her support for Saur, whom she said had always been “so sweet to her,” but when I asked her for a quote, said she was applying for a job with Hardin County Schools and didn’t want to risk it.

During the protest, at least three city council members made a point to go to the discriminatory coffee shop to show their support for Erizer and Smith, as did a mayoral candidate.

How disheartening for queer people in Elizabethtown.

To make it worse, emails provided to me by a citizen who wrote to city council members following this incident to inquire about a possible city-wide fairness ordinance demonstrate that the very people tasked with making these decisions are ill-equipped to make them. One council member from Elizabethtown’s sister-city Radcliff responded asking what “LGBT” stands for and followed up saying he thought federal law already covered anti-discrimination. It’s not, but this is a common misconception.

The council member stated he would unequivocally not support any fairness ordinance because residents are conservative and don’t want it. He described it as not “popular.”

How many times do we have to remind conservatives that the rights of a minority should not — and have not — been decided by the vote of the majority? This is why it took acts of government to give women the vote and to end slavery and finally segregation.

Pride parades and festivals are coming next month across the country and in Louisville, a time of fun, celebration and reflection. There is certainly still work to be done in Louisville, but now that we’re able to so freely express ourselves, we should think about what we can do to encourage queer folks in areas where there’s still a lot of work to be done and a distinct lack of support.

We’ll know the work is finally done when everyone understands that a T-shirt that says “LGBT” isn’t treated like an explicit request for sex.