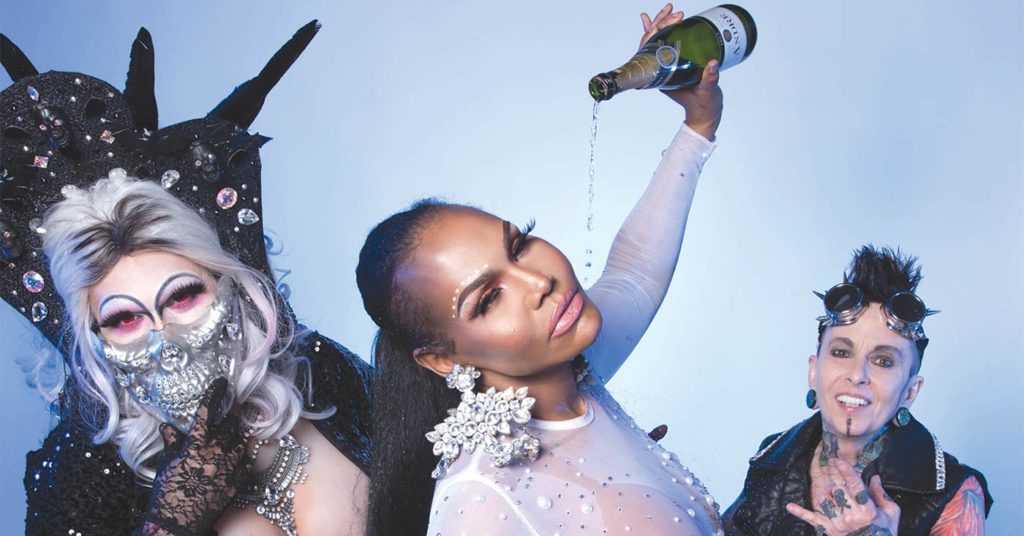 Remember that captivating drag queen on the cover of the latest issue of LEO who is wearing the silver mask? That’s Stevie Dicks, a drag queen who loves to keep you guessing. While other drag queens are rhinestoning their outfits, Dicks is figuring out how to make her fingers look like octopus tentacles. You can catch her performing all over the city at burlesque shows and as a judge for PLAY’s Drag Me to Hell competition. On Friday, May 11, Dicks performs as a Special Guest Play Mate at PLAY Louisville. But before all that, we asked her a few questions about her drag and the Louisville scene.

LEO: Hey Stevie! So what inspired the mask you are wearing in the cover photo?

Stevie Dicks: I made that mask, originally, because I’m very inspired by the women on the album covers of a lot of ‘80s metal albums. You know, the ones riding on a dragon through hell with a viking sword [laughs].

As a queen who works outside of the traditional drag aesthetic, do you have to deal with any shade in the local scene?

Well, it’s drag, so there will always be shade [laughs]. I did a lot when I first started drag. It was hard to even get a booking in the LGBTQ community, so I took to working with burlesque and sideshow groups to make a name for myself. It was Shawna of The Dead who was the first one to book me in the community, along with Felicia D. Knight giving me a cast spot after meeting me at his show. As of now, I don’t feel that anymore, I feel like drag here has changed a lot in the past few years, and stuff like what I do is more accepted. When Jade Jolie approached me about doing our Drag Me To Hell competition, it was what I had been working for here all along. PLAY has really welcomed all the weird, and I couldn’t feel more a part of the community now.

How would you characterize the local scene? Is there anything you would like to see change?

I would say the drag here is diverse. It hasn’t always been, but it sure is getting there now. We had the beautiful Playmates, who really embody beauty and glamour and give some sickening impersonations. We have club kids like N8 and Drew with FilthyGorgeous where the outfits are so wacky and fabulous. We have the Derby City Sisters giving glittery bearded clown love. Then you have punk weirdos like me, and all my little Drag Me to Hell babies. They have all worked so hard and impressed me so much. We have campy girls, so really, we got it all. We have PLAY Louisville, Pride Bar, Mag Bar, The Cure Lounge, Purrswaytions, all with different and amazing entertainers.

Can you tell me more about the Drag Me To Hell competition?

It’s a local competition Sundays at PLAY Louisville. In a few months it will be our third year doing it. I was asked to judge season one by the amazing Leah Halston, then made a permanent judge. Jade Jolie approached me about doing a punk version this year, inspired by the “Boulet Brothers’ Dragula” and making the girls who didn’t shine as bright go through a drag queen “Fear Factor.”

If someone’s only exposure to drag is ‘RuPaul’s Drag Race,’ what can they expect that is different at one of your shows?

My advice is, if you only know of drag from Drag Race, you are missing out. There is so much creativity in this city, get off the couch and go support your local queens, kings and queers who are making amazing art in your own city. Show them love and dollars. As for my shows, I like to keep people wondering ‘what will she do next?’ You could see beauty, camp or pure filth. So come out and see for yourself.

Finally, what are your plans for Derby weekend?

I’m not fully sure what I will be doing yet. It’s my first year to actually go out and enjoy it, so I will probably throw on a wig and a big hat and go out and support my LGBTQ family as should you! •

Off to the races!  – LEO’s guide to Derby drag shows

After you hit the jackpot at the track, take your winnings and make it rain on The Playmates of PLAY, who are billed as “the art of female illusion perfected.” Expect extravagant outfits, lip-sync performances and seductive dancing by drag performers Akasha O’Hara Lords, Jade Jolie (alumnus of “RuPaul’s Drag Race”), Karmen Kazzi, Leah Halston and Shontelle Sparkles; and music provided by DJ’s Fierce Tease and SleepyT. And since it’s Derby weekend, each night features special guests.

After Thurby, head to Play, where guest DJ Derrick Carter will be playing house music all night. The club is also hosting “RuPaul’s Drag Race All-Star” finalist, Shangela, who will surely put on an amazing show to kick-off the Derby festivities.

For both Oaks and Derby after parties, join “RuPaul’s Drag Race All-Star” (and front runner until she dropped out) BenDeLaCreme. Also joining her for the festivities is Michael Jackson impersonator Rasean Montrese. And on May 5, in celebration of Cinco de Mayo, the club is offering $4 Coronas.