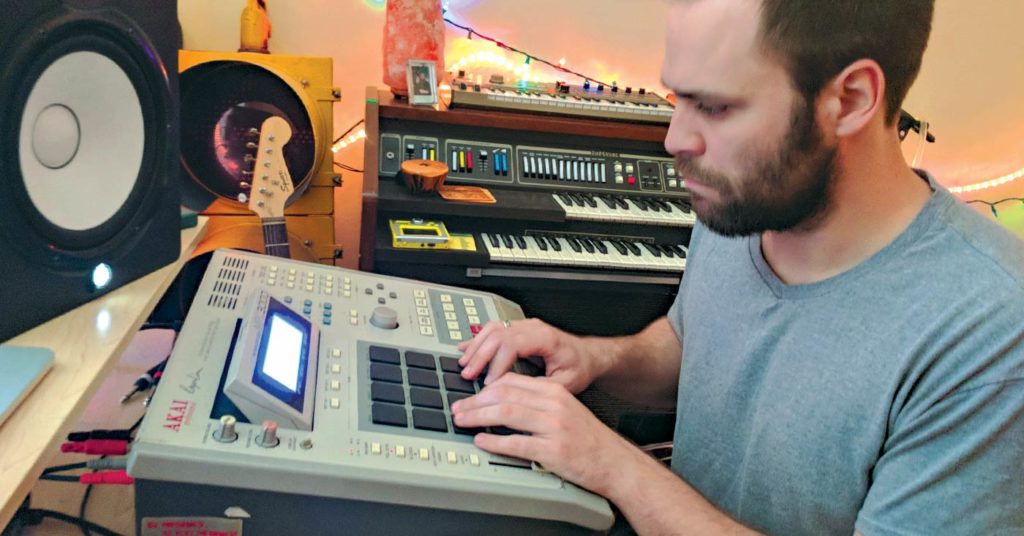 Roman Aprile is busy trying to get his recording equipment up and running, but he’s not getting frustrated despite repeated mysterious failures.

Currently, Aprile, who makes music under the moniker Dr. Dundiff, is more concerned about my comfort in his recording studio, a converted room in his Highlands apartment — he doesn’t want it to be too cold. In between flipping switches and testing a keyboard, he answers questions.

At times, he mutters under his breath, as his Rhodes keyboard remains silent: “Awwww,” he says, “giving me some trouble.”

In his living room, his 10-year-old puggle Layla sleeps quietly on a couch, while 6-month-old Zeta whines anxiously in her crate on the other side of a closed door.

“Chill out baby, you’re fine,” he called out to Zeta.

Aprile has four album releases in 2018 — two solo records, Muneybeats and The Distance, along with Death, a collaboration with emcee Touch AC, and Cool, a collaboration with Otis Junior. The latter is the follow-up to the well-received Hempispheres. Aprile and Otis Junior will also embark on a tour of Germany this summer. But for now, he has work to do in the studio, and a puppy to quiet.

As he continues to configure his system -— which was unhooked because he lent out his cherished MPC3000 to Erykah Badu for a show inside Papa John’s Cardinal Stadium on Oaks night -— he talks about how his recordings are doing well these days on the streaming service Spotify. He creates original hip-hop beat tracks, instrumentals, that people can purchase for their own use.

“One of the songs on there jumped 250,000 spots in two weeks,” Aprile says casually. “You can make decent money doing that. I enjoy it, too.”

This is his day job. He makes beats, records melodies and soundtracks for others and for himself. Framed records, a few of the 40-plus projects he has released, line the walls of the small studio. The blinds are drawn tight, with small amounts of sunlight sneaking in to provide an assist to the strings of illuminated Christmas lights.

There’s music gear everywhere — a small drum kit, a pair of Squier guitars, several different keyboards. There’s a stoplight in one corner, which he tells me his girlfriend’s father gave him.

“He was just throwing it away, man,” he explained.

Aprile loves to collaborate. In fact, he touches a lot of different artists, in a lot of different ways, providing a sort of building block for his project Dr. Dundiff & Friends, an enormous collaboration of the local hip-hop scene that began during a performance at Forecastle two years ago, and since has resulted in an album and a few more concerts.

The Forecastle performance turned to legend, which included My Morning Jacket’s Jim James, Sleye Kooper, Rmllw2llz, Jack Harlow, Dat Boi Dunn, 1200, Touch A.C. and, well, pretty much every Louisville rapper you’ve ever heard of. It was a coming-out party of sorts for Louisville’s blossoming rap scene.

“I was just, ‘Man, we can do something huge, and if they’re going to let us into Forecastle, I can’t just get up there and DJ some tunes,” he says. “We gotta do something epic. And I think our band is fucking dope.”

James Wallace, aka Touch A.C., is one of Aprile’s best friends — Wallace calls him a “high-caliber musician” who is remarkably focused.

“He’s very driven,” Wallace says, “very focused. All he wants to do is make music. That kind of work ethic — people notice that stuff.”

Wallace says that focus and intensity carry over into rehearsals and recording sessions: “He’s the band dad. He goes through all the phases of emotion a father could go through with his children at a kid’s baseball game.”

Aprile uses the term “we” a lot when talking about his music. And it makes sense that other artists in the scene — and beyond — would want to work with him, because Aprile possesses the easy demeanor of a surfer dude.

“His portion of the collaboration is mostly finished before I even start,” Otis Junior says. “He presents me with a general vision, that vision is then projected through my lens, then we refine it together. Working with him is like painting on a high-quality, custom-made canvas.”

Back in his Highlands apartment, Aprile finally gets his Rhodes making gentle sounds, and says, “That’s good, that’s what we want.”

He starts immediately in on creating a bass line, explaining that he has sampled a single bass note from another song — just a sound he likes — and plugged it into his MPC3000 Production Center, made in the early 2000s (it still takes floppy disks). He refers to the machine as “she.” He begins making a full bass line from that one sound, adjusting it to the key he wants, then creating the scale from scratch.

“Some of these bass sounds, the way they’re recorded, they sound way better than I could get [by playing it],” he says. “If you like a sound, just take it. That’s what I do.”

Dr. Dundiff just saw the release of Death, following the February release of Muneybeats, which is a tribute to the television show “The Office.” The album also produced a video for the song, “Nobody Likes Beats.” He admits to being obsessed with the show.

It’s an ironic obsession for a 26-year-old guy who has had exactly one office job in his lifetime, for only a year. Hey, why work for The Man when you can make beats for a living?

“If I can get by doing this, that’s the goal,” he says, working on a track for local artist ZLynn Harris. Aprile’s girlfriend, Caroline, is a lawyer, and they share the apartment in which he records.

“We don’t have real, super-adult expenses,” he says. “I did a Humana gig for a year. It wasn’t fun, man. I just looked [at credit reports] to see if people were eligible for insurance. It was good money, but I was like, ‘Fuck that.’ I figured I should go as hard as I can musically, while I can.”

With this, he muttered “good god,” as Zeta whines in the next room. He goes to check on her, then quickly returns and gets back to work.

Aprile started playing music while in fifth grade at Bloom Elementary: “I ended up playing the fucking standup bass,” he says. He picked up the guitar in eighth grade, heavily influenced by Nirvana at the time, but he always has had an affinity for old-school hip-hop.

“We would make beats in, like, Garage Band,” he says, referring to the Apple recording software. “It was a drag trying to drag iTunes songs over to try and sample them.”

In 2010, his senior year at DeSales High School following a transfer from Trinity High School due to bad behavior, he got his first MPC machine on eBay. It no longer functions properly, but it’s decorated with painted graffiti and carefully set aside in his studio. He beams when he shows it off.

As the afternoon unfolds, a song takes shape. He’s recording backing tracks for Harris. He talks about working with various record labels — his music is typically released on Jakarta Records — which helps bring in money to pay the bills, and he talks about making custom beat tracks for people who find his work online, saying he will usually create a basic loop for about $250.

“Maybe $500 if you want something special,” he says. As he effortlessly makes music, switching from keyboard to keyboard, then back to his production center, it’s as if he’s doing it like most people might go about pouring a bowl of cereal, or tying their shoes. His “aw, shucks” humility about the talent he exudes is equally impressive.

He moves over to the Rhodes, and suddenly it isn’t working again. He apologizes and says, “I swear to god, this thing is always so great.”

“Dude, I’m trippin’,” he says, and then explains that the keyboard was made in the 42nd week of 1975 as he tries to get sound. He discovers a partially unplugged power cable and glides on effortlessly. He’s improvising a melody to go with the beat, playing it by ear as his head bobs along.

“I’m, like, barely in the scale, but I’m trying to find a nice little switch,” Aprile says. “It’s a nice little groove, but it just needs something.”

He gets what he wants, mixes it in, and in a flash, he’s at another keyboard. Using a vocal synthesizer, he begins dropping stylized backing vocals onto the track, singing into a mic, “Come with meeee-ah.” When synthesized, it doesn’t sound human, but the words are distinguishable. Harris will later write the lyrics to fit the melody and beat.

He gets the vocal effects where he wants them and exclaims, “Whoo! That’s pretty. That’s the way this’ll go.”

He talks casually about his love for all music, from rock to classical to jazz. As he talks, he gets a text message, looks at his phone and begins laughing out loud. It’s a veterinarian friend warning him of reports that dogs and cats are suffocating by getting their heads stuck in discarded chip bags.

Aprile graduated from Bellarmine University with a degree in music production. He was already advanced enough coming out of high school that he skipped the early parts of the music program.

“Bellarmine was a fucking great school,” he said. “I learned a lot there. I honestly wish I had learned more — I was more interested in making beats then.”

A few accents using a talk box, Peter Frampton style, and the tune is complete. In roughly two hours, he’s gone from a single bass note to a nearly-complete song — and that includes all the technical glitches he navigated along the way.

Aprile talks about the future and acknowledges that if his music-as-a-profession ever goes belly up, he may have to get a day job. Someday. He seems unconcerned — he talks more about one day marrying Caroline and having kids.

But it’s music that keeps him going — he spends most days in his studio, mixing beats and making melodies, sometimes playing live or recording vocals in a collaborator’s studio.

“If it had to happen, I don’t think I would really care,” he says, speaking on the possibility of working in a cubicle again. “But I could also just see this being how it is. And I’m really cool with that. I was just talking to my dad about when people retire, you still have to have a passion.”

Aprile emerges from the studio, and Zeta’s tail is wagging eagerly at the sight of him and a guest in their home. He baby-talks her as he passes by. Layla is still sound asleep on the couch. Outside of the apartment building, it’s a typical spring day in the Highlands.

Upstairs, the beats go on.