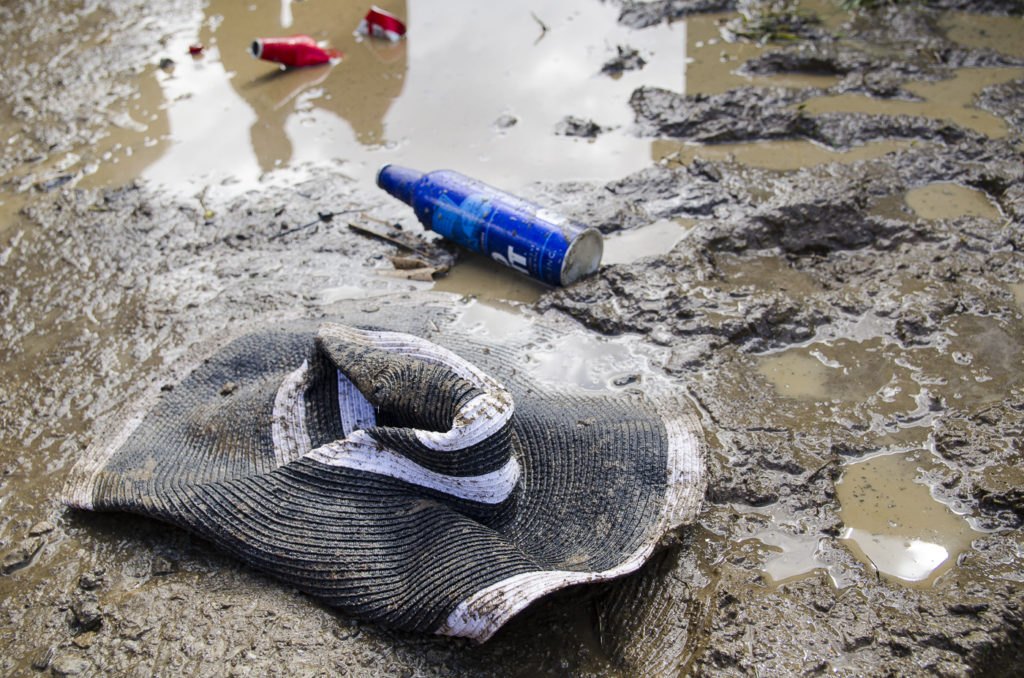 Right after the ninth race, on the hill that descends to the Infield betting line near the entrance, two guys squared off like they were going to mud wrestle. They circled each other for a few seconds, and then both stepped back and walked away, more or less deciding that it was too cold,rainy and miserable at the 144th Kentucky Derby to make questionable life decisions. And, while I’m sure plenty of questionable life decisions were made, per tradition, that story seems to epitomize the infield in the middle of the afternoon: Everyone was pretty calm and collected, because everyone who was stubborn enough to be there was soaked and shivering.

After accidentally coming in through the paddock entrance, we were able to momentarily find some shelter, but a horde was scrambling to do the same thing, and sometimes it’s better to just stand directly in a downpour than to fight through a crowd of people trying to make themselves comfortable. At 2:30 p.m., there were more people leaving the infield than going in, and, of the three years that I’ve gone to the Derby, this crowd seemed to be the lightest by far. Understandably so — it’s probably worth eating the $70 Infield ticket price to increase your chances of not getting hypothermia. Hustlers selling ponchos walked away from Saturday with pockets full of cash, especially since cover is hard to come by in the Infield. Only little awnings from food and drink stands or betting windows provided any, and it’s hard to post up at one of those spots for an extended period of time. Maybe the most ambitious, disgusting and kind of clever place I saw people hiding out was in dumpsters. On one hand, there’s currently a hepatitis A breakout. On the other, the weather was basically March in Cleveland.

One of our friends got the wanders and disappeared into the crowd. Finding someone turns into a long and frustrating process in a sea of people, but ultimately one you expect to go through every year at an event like this. Especially when it’s that cold. Liquor is really the only way to talk yourself into believing it makes sense to be there. He was eventually found, aimlessly walking and fine. With a half hour to go to the big race, we noticed our lips were starting to turn blue, so we had to make the decision of whether to leave right then, and get out in five minutes, or wait another two hours, since the lines bottleneck and get chaotic after the winner’s announced. We left, sneaking out at the right time, but missing my favorite part of people watching, a special sort of weird window that happens after 7 p.m., when a day of drinking starts to turn on people. It wasn’t smart or fun to be in infield this year, but I think that I say that every year the week after the Derby. And then, 51 weeks later, I’m back in one of the most ridiculous and absurd sections of any sporting event on Earth.