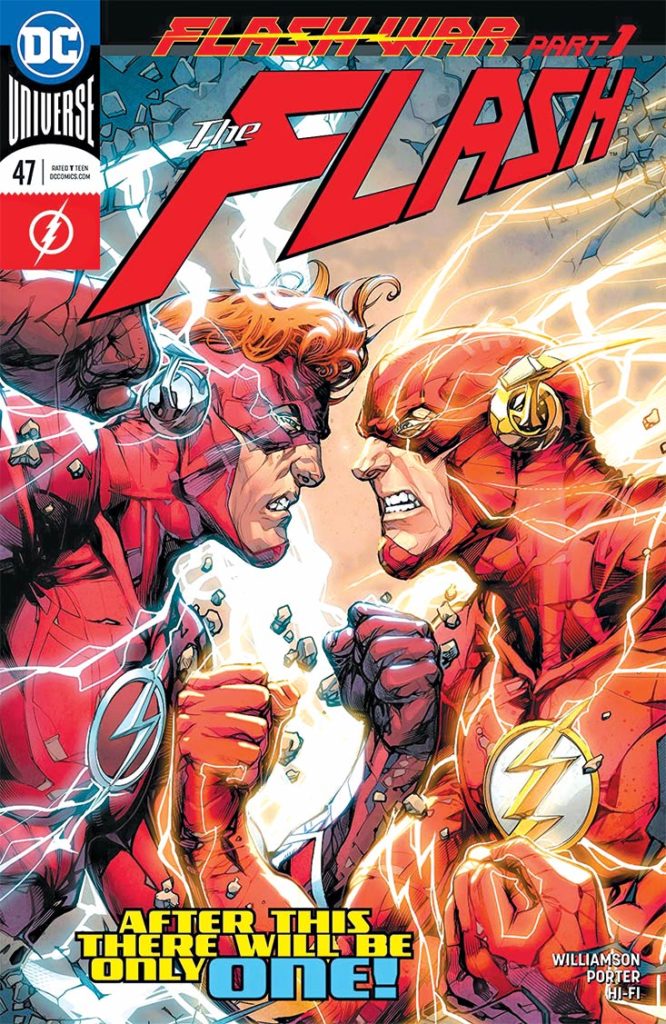 In a story that Flash fans and longtime DC fans alike have been waiting for, Flash War has officially begun! “Flash” No. 47 brings the rising tension of the Flashes, Wally West and his mentor Barry Allen to a head in chapter one of the storyline.
Writer Joshua Williamson and artist Howard Porter (for whom I can never say enough good things about) go all in, starting our characters on a journey through time that promises repercussions that will have an actual impact. The Renegades have come to arrest Iris West for the murder of 25th-century speedster villain Eobard Thawne, which immediately causes more conflict between Barry and Wally. They have very different ideas about how to keep Iris safe, and I personally can’t blame Wally for not trusting some time-traveling future cops who are dressed like the Rogues, a group of Flash villains.
One of the things I like best about Flash War is that Williamson has done well to set up an understandable conflict between Barry and Wally and he hasn’t sacrificed their characterizations in order to do so. They fight, they make up, and they still have lingering tension.
“Flash” No. 47 is an awesome start to a major event that Flash fans won’t want to miss. Williamson and Porter are getting to break new ground with Barry, Wally, and their supporting characters. If this issue is any indication, Flash War will be an event talked about for a long time and a big turning point for our beloved scarlet speedsters. 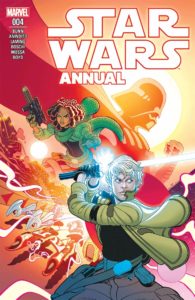 “Star Wars” is one of the biggest franchises on the planet, with 10 live-action films and counting, not to mention a handful of animated series. So getting into the comics can seem a little daunting. “Star Wars Annual” No. 4, though, is an excellent starting point that can be read by fans old and new.
Cullen Bunn’s story is small-scale and focused, while also managing to provide spectacle on par with the mainline films; suffice it to say, there’s plenty of X-wing and lightsaber action here, right alongside the smaller character moments. Bunn’s talents as a writer shine through his use of Darth Vader, who under his pen becomes equally frightening and pitiable.
The story is supported by the pit crew of artists: Ario Anindito, Roland Boschi and Marc Laming. Having so many artists on the book turned out well, rather than becoming a case of too many cooks; there’s tons of variety here, from bright and sunny colors to gritty grays and browns. Nothing fancy, though, as Bunn’s story is very much the focus of this special.
Above all, “Star Wars Annual” No. 4 strives to be fun, a goal that it reaches and then some. It won’t radically change your understanding of the universe, but there is an action-packed, engaging story that can be shared with the whole family. I would absolutely recommend coming down and picking a copy off the stands.