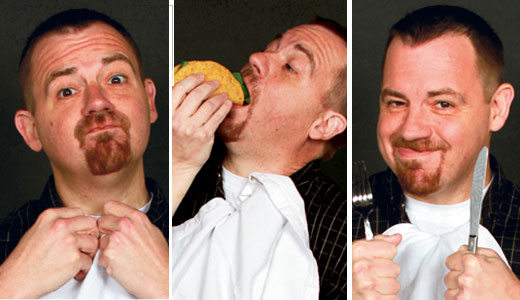 My friends and family have to come to think of me most anytime they see a bacon meme, recipe or fun product. This is because I harp often on just how delicious bacon is — it’s a savory masterpiece, and I will forever be grateful to pigs for the salty and smoky sacrifice they make.

But the truth is, I don’t eat much bacon. I do love it, but bacon isn’t the most-healthful thing on most menus, you know? Still, the bacon references persist, and I have been gifted everything from signs to hang in my home to bacon bandages for my boo-boos.

And so it was that my friend Rita happened to gift me two bottles of — drumroll, please — bacon-flavored soda.

The soft drink is produced by a West Coast company called Rocketfizz under a brand dubbed Lester’s Fixins (there is a bespectacled, bald man in a suit on the label who apparently is this Lester fellow). It is simply called Bacon Soda, with the words “Artificially Flavored” prominently displayed above the name on the brown and yellow label, reassuring us that no pigs were liquefied in the process of creating this drink.

The slogan, “Y’all get yer fixins!” aims to give the brand a homespun quality, along with the retro-leaning fonts and, as you’d expect, there is an image of two bacon strips on the label. The second bottle my friend gave me was a version of the soda with maple syrup in the mix.

I had the bottles in my possession for nearly two weeks before I finally drummed up the courage to open one. First, of course, I examined the liquid in the clear bottle: Certainly, it’s the general color you’d expect a bacon soda to be if for some reason you were imagining what a bacon soda might look like, so there’s that.

So, I popped the red cap, and a first whiff of the stuff was immediately jarring with its awkward familiarity… kind of like meeting the sibling of a casual acquaintance and wondering if they are the person you personally know, or someone who just resembles that acquaintance. As I further sniffed and let it sink in, I thought I got a hint of smoke — or was I just willing my olfactory to pick that up?

Finally, realizing my brain would never manage to translate that aroma, I decided to take a drink. Well, the smell translated to the taste buds, and on the palate this bacon became a caramel-filled sugar-bomb. It was super sweet and yet had a weird, sharp or bitter flavor that I suppose might on some distant planet bear resemblance to something bacon-esque. I guess.

I read the ingredients and found nothing suggesting artificial smoke or hickory, although the ubiquitous phrase “natural flavors” made an appearance. But there was one thing on that list that really puzzled me. Cane sugar, citric acid, caramel color … and beet juice.

In what universe do beets somehow convert to bacon in liquid form? Is this some sort of Lovecraftian nightmare? Finally, I did a little fishing around on Google and another writer nailed it — the stuff smells (and probably tastes) like Beggin’ Strips. Yes, the dog treat. Frankly, I love my dog too much to give him those treats — or that soda, either.

But yeah, that nails it — opening that bottle of soda was akin to opening a bag of Beggin’ Strips, which really shouldn’t be so surprising. It does make me wonder, however, if Beggin’ Strips have beets in them.

Anyway, for some reason I decided to open the maple syrup version to try it, and it tasted exactly as I had assumed — like drinking straight maple syrup, with a pureed Beggin’ Strip mixed into it.

But ol’ Lester, he wasn’t satisfied with just profaning bacon by turning it into a soda. Nope, Rocketfizz also gives us plenty of other flavors that defy logic and even basic human decency: peanut butter and jelly, coffee, sweet corn, Buffalo wings, bacon with chocolate, pumpkin pie and ranch dressing.

I’ll not be delving into those other flavors as, thankfully, bacon is the only thing my friends and family have reflexive association with when it comes to who I am as a human. And I admit I am suddenly quite thankful I am thought of by no one as “the ranch dressing guy.”