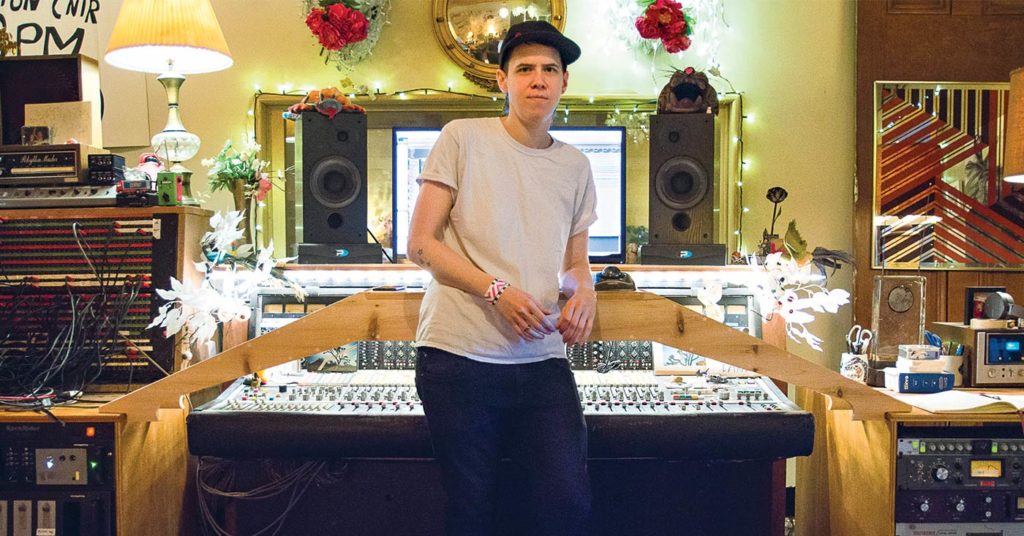 Through a bright and inviting kitchen, and past the living area with a juke box that looks like it was pulled out of a 1950s diner, Anne Gauthier stands at a large control board in La La Land studio. She’s peering through a small window at Torey Meagher, who’s hunched over a sampler, punching in parts to a warbling, grinding electronica track with a deep groove.

“I don’t know if that’s normal, but I’ve been hearing a clicking sound,” Gauthier said, picking the oddity out of a dense, layered song. “Is that part of it?”

“It shouldn’t be,” Meagher responded. “Let me go mess with it.”

Gauthier, who will become the head producer/engineer when owner/founder Kevin Ratterman moves to Los Angeles in June, is observant and decisive, but also has a cool calm and quick wit that exudes an egoless confidence and an effortless likability. She has a way of keeping the mood light, which she exercises as Meagher’s fixing his equipment, cranking the sound on the board up so it was possible to hear the birds in the backyard.

“They love a specific kind of music,” she said, laughing. “It’s really weird. Sometimes someone will play something and they’ll get wild. I guess they like electronic. They like a dance party.”

The 37-year-old Montreal, Canada native has been at La La Land for three years, training with Ratterman, but, especially lately, she’s been working mostly independently.

On the day that Meagher, a local musician recording his first solo record, was there, Ratterman popped into the control room for a few minutes, asking if everything was lining up alright, before quickly taking off. When he moves to LA, he’ll bring a mixing rig with him, but, on the ground in Louisville, Gauthier will be at the helm of La La Land.

“I really love how she treats everyone with respect and works tirelessly, whether its someone who’s sold millions of records and plays to thousands of people a night or the kids who just started a band down the street,” Ratterman told me a few days before. “Anne just picked up on everything I threw at her so quick. When I was gone on tour with Twin Limb, she was making records on her own with Rachel Grimes, Frederick The Younger, GRLwood or Tyler Lance Walker Gill. I would come home to mix those records and be amazed that they sounded incredible.”

Gauthier started playing drums in Montreal when she was 15, and she started touring nationally with The Frentics when she was 19. But, it was the band TR/ST that took her out of the country, traveling around North and South America, as well as through quite a bit of Europe. In between stints on the road, Gauthier used a home studio to do recording projects. In 2012, right around the time La La Land was opening, Gauthier read an article on Ratterman in the audio magazine Tape Op. Gauthier emailed Ratterman for some recording advice, and the two became friends. Later that year, she stopped by La La Land to see the studio while she was on tour. A few years passed by, but Ratterman and Gauthier kept in touch. Then, in 2015, when he was spending more time on the road and needed help in the studio, Ratterman hired Gauthier as a full-time assistant.

And, in the last three years, Gauthier said the size and capabilities of La La Land have helped her grow as a producer.

“It’s weird — in this world, you’re always learning,” Gauthier said. “I feel like even when I’m 65 and have been doing this for however many years, I’ll still be learning, which is really cool. I’m working with a lot more gear than I was working with back home, so that’s been really awesome, and I feel really lucky to do that. You just learn new tricks all the time, and new ways of doing things. And just having such a big space, too, in the tracking room, you have all kinds of options. There aren’t many studios that have this kind of amount of tracking room. You can experiment a lot more.”

Over the years, La La Land has recorded bands big and small, from all over the world, but there always seems to be a strong local presence there, a testament to not only the density and talent in the local music scene, but also La La Land’s place in it. Gauthier sees Louisville as an interconnected and supportive scene.

“That cool thing that someone is doing, people will notice,” Gauthier said. “It can kind of get lost a little bit in Montreal. Here, it’s very open. Whatever idea you have, you do and people embrace it in this city. People are really into the arts.”

And that’s something that she hopes La La Land can help continue.

“I feel like working together in the arts world is such a beautiful thing,” Gauthier said. “If you bring in all kinds of people, they’re all coming from that same, ‘I want to create something beautiful,’ it really unites people. Obviously, if I can help out doing that a little bit with the studio, I think that’s really cool.”

And Ratterman is confident that she’ll carry on the quality work and good reputation that La La Land has established.

“When we started working together it was obvious,” he said. “She has great ears and everyone loves her. She’s funny and dedicated. Knows when to push people and knows when to try and ease the tension of the studio. Such subtle, but hugely important things, in a creative environment.”

Musician Rachel Grimes started working with Gauthier in December of 2016 — first recording piano in Grimes’ home studio, and then, a couple of weeks later, continuing with violin and saxophone at La La Land. That project ended up being the score for the documentary The Doctor From India, which was released in May. Currently, they’re editing and recording overdubs for Grimes’ forthcoming folk opera The Way Forth.

“Anne is wonderfully easy and pleasant to work with, and is so ready at all times to support whatever is happening musically,” Grimes said. “She works so well with everyone, and helps maintain a great vibe while dialing in all technical aspects of the session in such a professional way. She brings great ideas and gives helpful feedback, too, when there is a question or stumbling block in the moment. Anne has been a great addition to La La Land and our music community and is the ideal compliment to Kevin’s approach and environment.”

The week before Torey Meagher was recording, Gauthier was standing in the kitchen of La La Land, talking about Sheila E.’s Derby festival concert with Tim Showalter, the driving force behind Strand Of Oaks, one of the most celebrated bands in Philadelphia’s stacked rock scene. Showalter, who was there to work on a follow-up to this year’s Harder Love, was excitedly talking about how Sheila E. came from music royalty (her dad is Pete Escovedo and her uncle is Alejandro) and her time collaborating with Prince.

Anne was blown away when Sheila took over for a bit on drums during the show. From harmonizing with strangers to finding people with homemade Prince T-shirts, the conversation mirrored the lingering adrenaline rush that happens after a great concert. Eventually, it died down and Showalter turned to me.

“You making an album here?” he asked.

I told him I was there to write a story on Gauthier, and he immediately began talking about how great of a producer she is, and how he’ll be back to work with her again.

“There’s unfortunately a very small number of studios — not bands — but actual studios that aren’t dude oriented. It’s a female-ran studio and I think that energy is going to be so important for artists that are coming here. It’s so good to have a different perspective when it comes to the creative process. I’m coming from the opposite perspective, where it’s always just so hemongonized when you go into studios. It doesn’t have to be gender specific, but it’s nice to have something different. We were just saying how often times dudes get together and it’s like, ‘Gear, gear, gear!’ And [Anne] was saying, ‘I don’t care about the gear. What’s the process?’”