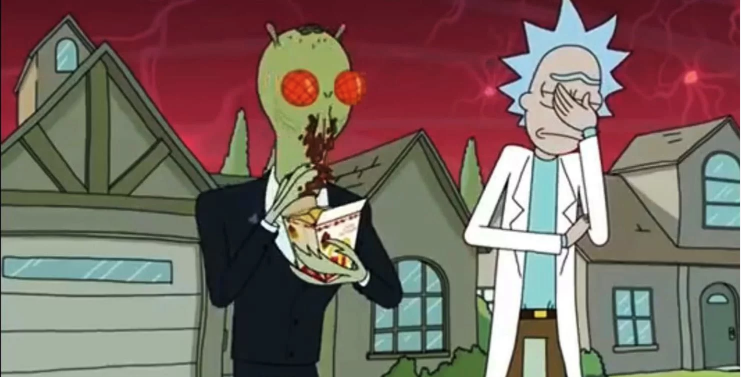 Image of "Rick and Morty," courtesy of Adult Swim.

GameKnights
Kaiju
Free  |  7 p.m.
Test your board-gaming skills (under the influence of beer or bourbon) at Game Knights. This weekly event, hosted by Nerd Louisville and “Squire,” of Book & Music Exchange (The Highlands), provides a choice selection of board games for you to play with friends. Come early to ensure a spot at the table, and feel free to bring your own board games.

The Cure’s Closing Shows!
The Cure Lounge
Free-$5  | Times vary
You may have heard that The Cure Lounge is closing, but before it does, the bar is hosting as many shows as it can. On Tuesday at 9 p.m., it’s Viking Night with drink specials and plenty of rowdy barbarians. On Wednesday at 9 p.m., with a $5 cover, you can see a eclectic mix of bands including The Telefones, Blood Planet, ritual/error and John the Band. And on Thursday at 8 p.m., see the last band-show at Cure with live music by VALE, Bathroom Laws and Bridge Burner and whoever else shows up.

Next Louisville: In Conversation with Sadiqa Reynolds
89.3 WFPL News Louisville
Free  | Noon-1 p.m.
Join 89.3 WFPL News on Wednesday at noon to see a live interview with Sadiqa Reynolds, president and CEO of the Louisville Urban League, who will discuss the State of Black Louisville 2018 report. The report details how African-Americans in the city are doing in regards to jobs, justice, education, health and housing. If that intrigues you, LEO is publishing essays from the report, three of which you can read here: part one, part two and part three.

Fourth Street Live! Farmers Market
Fourth Street Live!
No cover  | 11 a.m.-2 p.m.
The Omni Hotel — and the city — failed to bring a market for everybody downtown, so leave it to the city’s biggest tourist attraction, Fourth Street Live!, to do it right. Every Wednesday through October, it will host a farmers market, featuring local-only vendors. Free parking is offered.

Art + Sole
Against The Grain Brewery
Free  | 6:30-9:30 p.m.
This three-mile run/walk passes some of the city’s best murals, street art and wood artisans, and it begins and ends at Against The Grain, so you can enjoy a little buzz as well. The Saucony shoe company will hand out demo-versions of its Saucony Ride ISO shoes for you to test during the run. Arrive as early as 5:30 p.m. to claim you size of the shoes. You can also enter raffles to win $50 Fleet Feet gift cards, a pair of the newly-released Saucony Ride 11 shoes and furniture by Bourbon Barrel Furniture by Jason Cohen.

Public Art and Monuments Advisory Committee meeting
South Central Regional Library
Free  | Noon-1:30 p.m.
The city committee considering the fate of Louisville’s public art, including Confederate statues, is holding another meeting. According to the Louisville Metro Government website, the panel will “consider the historical representation of our city’s existing public art and monuments and develop principles that aspire to make public spaces welcoming and reflective of our diverse community.” The website also encourages the public to participate in the meetings through written comments. Comments can be submitted through an online form here.