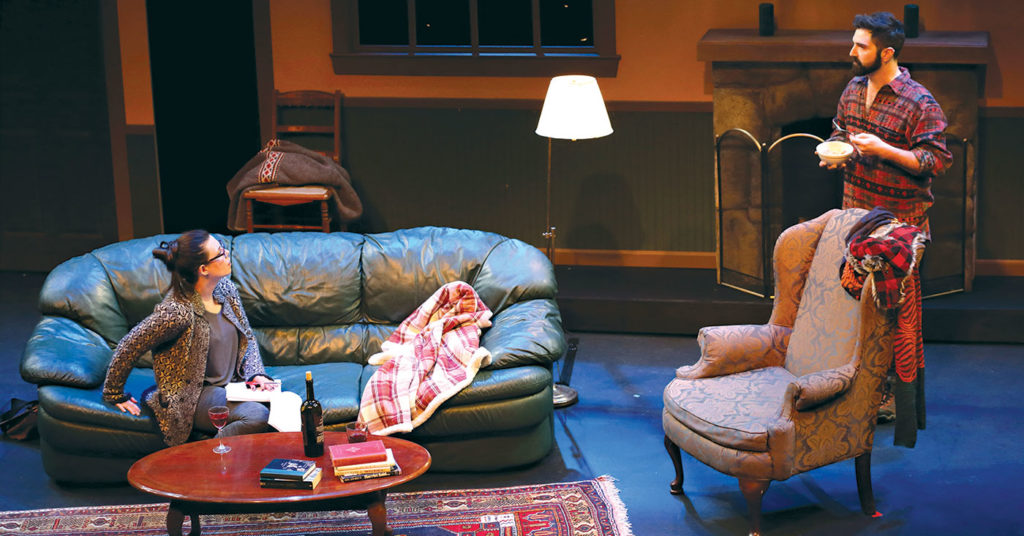 At a remote, snowbound writers’ retreat a brusque, arrogant young man arrives late one evening, interrupting the solitude of an older woman.

Both — of course — have come to write. Olivia (Lauren Argo) is a once-promising novelist whose ambitious first novel failed in the marketplace because of inept marketing. The experience left her shattered and vulnerable. She’s teaching now, and, though she’s still writing, she’s afraid to let anyone see her work.

Ethan (Winston Blake) found fame and fortune with a blog about his serial adventures having sex with strangers — a blog that earned him millions of followers, a lucrative book contract and an upcoming Hollywood film. He relishes his celebrity and riches — but aspires to write a serious work of art.

In Laura Eason’s play “Sex with Strangers,” which opened last week in a Liminal Playhouse production directed by Tony Prince, sparks fly as these two strangers spar — and, in due course, the strangers have sex.

It’s the sparring that sets the tone for this play. Eason’s rendition of writerly repartee is witty and revelatory and, under Prince’s keen-eyed direction, watching these two smart characters seduce one another is a blast. Hard as it is to believe, we now live in an era when a play set less than a decade ago seems like a period piece— in one scene, Ethan gives Olivia a brand new piece of technology called an iPad. And Eason’s knowing depiction of the ways a technological divide defines these two characters — who are perhaps only a decade apart in age — adds not only to the fun, but to the psychological complexity of fine performances by Argo and Blake.

The sparring and wit never end, but Eason wields the apparatus of romantic comedy as a wedge to open an entertaining discussion of topics that, in another context, would sound pompous and academic: the relationship between popularity and artistic success; the allure and price of celebrity; the situational nature of public and private identity and privacy; the malleability of personal values. •

Two wily teens narrate “Grown Up Fairy Tales — Shaken Not Stirred,” the first staged production from a new troupe called Company Outcast. Lila Schaffner and Mianna Smith take pains to explain things to the “olds” in the audience — and, when you’re in your dotage, it’s way more fun to be the object of barbed and clever wit than to be the object of pity.

Directed by Shauvon McGill, the show is a mix of scripted pieces and improvisations prompted by the audience (the night I saw it, the improvs were “Humpty-Dumpty” and “The Old Woman Who Lived in a Shoe.” The five scripted fairy tales aren’t so much “fractured” as they are dissected and surgically reassembled — and they’re a hoot. JoAnne Sweeny turns the story of the Billy Goats Gruff into sharp, twisty satire dealing with sexual harassment. In video projections, Martin French and Sweeny recount the stories of “Bluebeard” and “Bearskin” while on-stage actors play and lip-synch the roles to riotous effect. McGill’s “A Burden Unique to My Generation” gives Rapunzel a twist and places the story in an authoritarian, gated community. Marcy Ziegler authors (and a live ensemble accompanies) a revisionist musical parable called “Beauty of the Beast.”

This is a dream production for character actors and the ensemble cast (David Despain, Ali Gautier, Nicole Greenwood, Darren Harbour, Kelly McCoy and Casey Moulton) runs with it. •