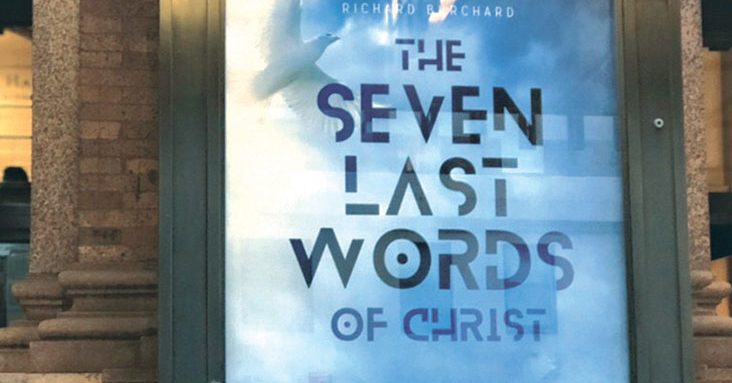 Midway through the live concert recording of Richard Burchard’s choral work, “The Seven Last Words of Christ,” there’s a striking passage when the sopranos enter on a shimmering high note in crystal clear unison. Then the voices slip sideways into a dissonant interval that sets up a haunting, ululating wail.

“The Seven Last Words of Christ” — the seven phrases that Christ spoke from the cross during the Crucifixion — have inspired composers including Joseph Haydn and Charles Gounod for hundreds of years. But the versions I’ve heard have all been rooted in the sounds of Western music.

In this passage — which depicts the moment Christ says to Mary, “Woman, behold they son” — Burchard opens a musical door into the Middle Eastern world where the Crucifixion occurred.

It’s a beautiful and haunting moment in a piece filled with solemn, sweeping grandeur. And on April 9, the piece made its Carnegie Hall premiere in a performance by the Masterwork Festival Chorus and the New York City Chamber Orchestra under the direction of Greg Fuller (of the University of Southern Mississippi).

Burchard, a faculty member, composer-in-residence and former chair of the music department at Bellarmine University, is steeped in the sounds of western classical and liturgical music. But he’s also had a long fascination with the music of the Middle East and Asia (at one point during his career, he ran a shop in the Douglass Loop area that sold a wildly eclectic assortment of musical instruments from all over the world).

The power of these seven phrases — which start with the exhortation “Father, forgive them; they know not what they do” and conclude with “Father, into thy hands I commend my spirit” — is that they reveal a story of love and sacrifice that pulls people in.

“I saw the words that Christ spoke from the cross as taking us on an emotional journey,” said Burchard. “There is darkness in the story,” he said, but there is also light. There is confusion, pain, faith and Christ’s youthful own innocent spirit.”

Throughout the piece, said Burchard, he was trying to imagine both Christ’s inner world and to visualize the actions that were occurring. “I wanted the music to bring out a sense of the visual activity that is happening on the ground as Christ finds his way to a sense of serenity and transcendence.”

And though Burchard never fully abandons the Western perspective, in the passage described above, he said, “That is a nod to the Middle East. I’m influenced by that music — but I didn’t want to get too far away from a Western perspective. So the mode of that section and the vocal and string slides are indicative of the sounds that you hear in that part of the world.”

Reflecting on the way his work has developed over the years, he says the thing he appreciates most about being a composer now is that he lives in an era when composers are not bound by the constraints of any particular style. “The sky’s the limit. The introduction of world music to the western palette has really opened up a lot of doors. So, for me, part of the pleasure of the work is to come to know and have access to these techniques that can create textures and layers and colors that capture the mood of a piece in ways that aren’t just focused on tonality.” •

A live recording concert recording of the entire piece is available on SoundCloud.