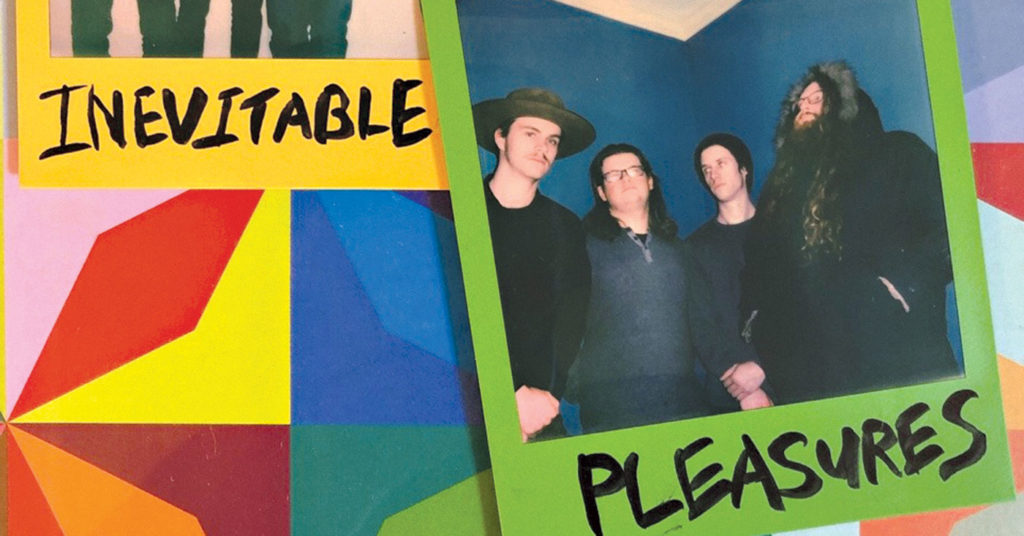 While Pleasures Of The Flesh incorporates sounds from various corners of the post-punk world, “Visitations” bleeds somewhat differently than the other songs on their new EP. It’s less bombastic, more melancholy and a little more of an earworm hum-along. The main riff, awash in a pleasant, early ‘90s-ish grunge chorus, is the centerpiece. The repetition is almost hypnotic, the vocals falling somewhere between a Pixies laissez faire mumble and a Robert Smith yelp.

“I feel like we don’t usually write songs like this,” Cadillac Young, de jure leader of Pleasures Of The Flesh, told me. “But we didn’t want to overthink the music on this one. We wanted to let the words shine whereas we usually focus more on the music. I don’t mean that we don’t focus on the lyrics but this one was especially that way.”

The theme of “Visitations,” Young said, comes from both a far off galaxy, and an all-too-dark and familiar scene found right here. Though Young does admit he “tried to make the lyrics vague” enough to be more generally extrapolated.

“I love aliens, or the idea of extraterrestrials, and completely separate of that, I had to go to a visitation for a friend’s dad’s passing, so the word visitation was being used multiple times and every time I heard it, I just thought about aliens,” Young said. “I thought it would be cool to write a song with the theme of visitations. So Kyle [Thompson, guitar/vocals/synth], and I each took a verse. His was from a funeral aspect and then mine was in the alien arena of things.”

And much like Slash’s “Sweet Child O’ Mine” riff (among others), “Visitations” joins the ranks of songs born from the mind of a bored guitarist’s errant noodling.

“I came up with the initial riff just diddling around,” Young said. “I never intended to use it but the guys heard it and liked it so we based a song around it. We never could come up with much more for it, so that’s why it just has a part A and part B. We liked the way it was and it made sense to us with the idea of the song.”

If you’ve heard the song before reading this one thing that might not have occurred to you yet, though will now be impossible to shake, is Young’s melodic “theft” of a high-profile ‘90s band.

“An interesting aspect pointed out to me on this song was that my vocal melodies sounded like a Sugar Ray song. I said, ‘Well, while we can all agree that it’s a super good melody, no one wants to listen to Sugar Ray.’ So I just took it and made it my own. Hopefully people who like that melody and don’t want to listen to Sugar Ray can now enjoy it in what I’m going to call a good song,” Young said, pausing to laugh. “Even if that’s pretty pompous of me to say.”

‘Visitations’ is from the 2018 EP, Inevitable Pleasures.