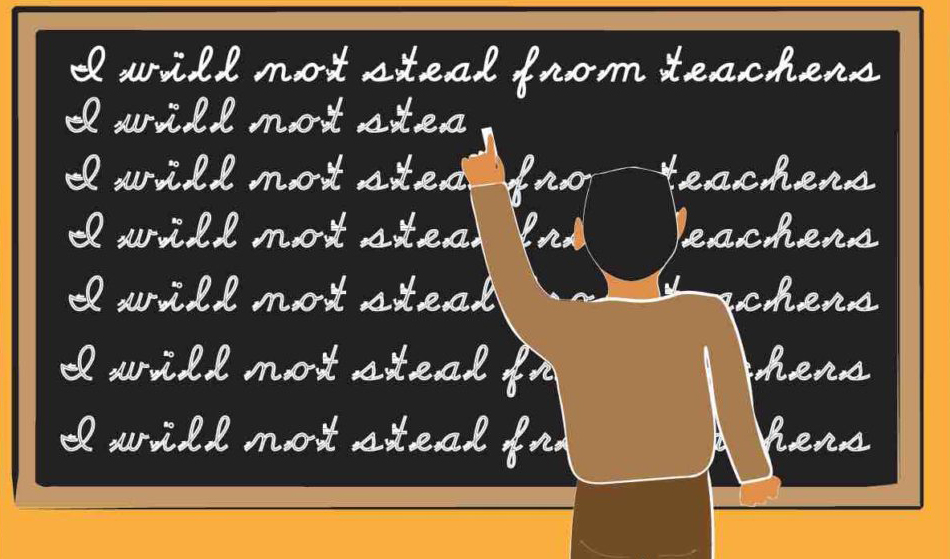 As state Republicans move to solve a pension crisis at the expense of teachers, remember that politicians got us here by using pension fund payments for other purposes, instead of raising taxes or finding new revenue. But the GOP decided instead to dun teachers. A cynic would say it is more of Gov. Matt Bevin’s War on Education — a GOP plan to kill public schools so his cronies can open charter and private schools for the rich. Below, three teachers explain the attack on their profession.

“The strike may be hard for reformers and the libertarians in the GOP to understand: The teachers in Kentucky are not striking for themselves but for their profession.” —Diane Ravitch, education historian

“Defend an institution … Do not speak of ‘our institutions’ unless you are making them yours by acting on their behalf. Institutions don’t protect themselves. They go down like dominoes unless each is defended…” —Timothy Snyder, “20 Lessons From The 20th Century On How To Survive In Trump’s America”

Stories matter, we tell our students. The ones we tell ourselves, and each other, often shape so much of who and what we are, both individually and collectively. Trust us, we know this isn’t a revelation, but when approached to share our experiences about what’s happening in Kentucky with the pension bill and education, we couldn’t separate our story as school teachers from the larger context of what’s been happening nationally to our public institutions. Please consider closely the symbiotic relationship between public institutions and our shared, nonpartisan, democratic ideals. The decisions we make today will largely determine the conditions of possibility for tomorrow.

Thursday night, in late March the news spread across social media that a 291-page pension bill was cravenly grafted onto SB 151, an unrelated, sewer bill. The bill hadn’t received an actuary review, which is illegal according to our state’s attorney general. The lawmakers voting did not even have time to read it.

The plan, while not as draconian as prior versions, simply cut benefits for all public employees (including first responders), and especially for new teachers, and it offered zero new revenue. Somehow the media has failed to state this simple fact: This Plan Does Not Solve This Pension Crisis. In fact, none of the reform plans offered by Frankfort even claim to solve the crisis. Some of the plans would cost taxpayers even more to implement than the original systems. Put simply — without additional revenue, public pensions are in big trouble!

Here we want to remind readers that teachers and public servants did not cause this debt crisis, and, in past years, were required to contribute even more of their salaries to avoid it. The history of the pension system for teachers is complicated and legalistic. While we wish we could explain every detail of this history in our brief story, we know what matters is the answer to why. Why have we decided to oppose this bill and other so-called “reform” ideas presented by Frankfort?

Why did we teach citizenship and democratic participation to our students that Friday through protest? Readers, you should know we decided that night, in a rapid succession of text messages, alongside years of learning and research about the looming crisis, that the costs of this bill were too high for the Commonwealth, our profession and public education. That’s not hyperbole.

Here’s why we resist SB 151 and the coming budget attacks on public education:

2. It hurts public employees of all sectors and undermines those professions we rely on for a civil society.

3. It shifts funding to local, often poorer counties and cities, and exacerbates inequality.

4. SB 151 severely damages public education by diminishing the quality of new teachers and disincentivizes the future of our profession. We have witnessed in this brief period teachers we work with leave the profession or retire, and teacher training programs enrollments have declined drastically. Proposed budgets cuts are radical, destructive and further erode education.

These are the reasons teachers in over 20 Kentucky school systems were out sick Friday. Because, outside of the toxic, corrupt American/Kentucky politics, we see that all kinds of Kentuckians would be hurt by these “reforms.” Future and present students, teachers and parents need public servants who aren’t denigrated and maligned for their service as “selfish,” “ignorant’ and “thug”-like. They deserve respect as they patrol our streets, fight fires and, yes, teach children. I mention these other professions because their benefits and pensions are under attack as well.

We know that our public institutions, especially schools, need and deserve criticism. The status quo for these institutions is unacceptable. Yet we’d ask the public to consider what this impulse of destructive, ideological extremism has yielded recently in other school systems and state governments in our country?

Readers, find out what happened for yourself in places such as Kansas and elsewhere where extremism defeated common sense. Pension bill SB 151 is part of that larger narrative, or story, put forth by a tiny minority, but often believed by many more, that says our fellow citizens that make up our schools, firehouses, police stations and clerk offices are undeserving of dignity and respect. While they maneuver political forces with their story of an illusionary yesterday, of an America void of responsibility and community hope, we must tell them this isn’t our narrative! A tale so malignant and destructive makes us all feel poorly.

Public institutions are made of people. Our schools reflect our culture and our many narratives about ourselves, as does our government. The mirror is maybe a good metaphor for us all as we go forward and face what we’ve built together.

We want to go back to work doing what we love soon, and as always we are willing to sacrifice, change and grow, but meanwhile we will keep fighting for a future we believe preserves a profession we love and maybe, a better world. That’s why we were sick, maybe to make us all be a bit better. •