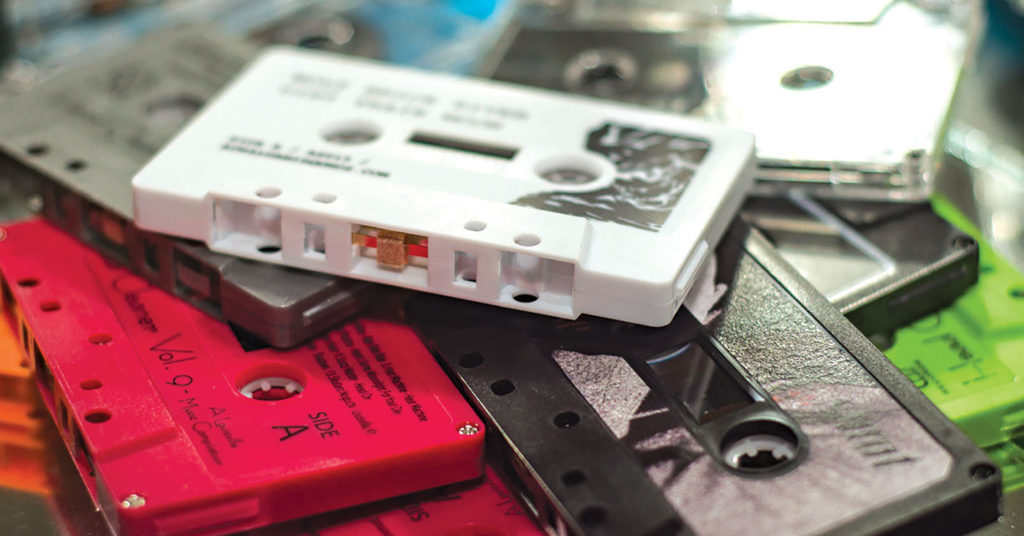 Over the past few years, the world has been running out of cassette tape, as the last company to produce high-quality tape closed its doors in South Korea in 2014. But the National Audio Co. in Springfield, Missouri will soon be able to make 20,000 feet per minute, and that is good news for small, Louisville record labels, such as auralgamiSOUNDS, Gubbey Records and Obsolete Staircases, which prefer to distribute new releases via cassette. They say it provides a much cheaper, quicker and, some feel, better-quality product than other physical formats.

Dave Rucinski, owner and operator of Gubbey Records, said tape is integral to the local music scene, and National Audio will help preserve that.

“It really is on the forefront of cassette culture — they are extremely knowledgeable and have put in huge investments in equipment and tape,” said Rucinski.

Rucinski has distributed cassettes since 1994. After chasing new formats around the turn of the century, the label returned to cassette-only releases in 2012.

“It has certainly allowed us to put out bands that we love that we would have had to of passed on, because the band could not have sold enough units to cover the expenses for vinyl,” he said. “A cassette release benefits the local music community, allowing people to hear bands that otherwise would not have been able to have had a professional release.”

Roll back the tape

In December 2014, the South Korean company Saehan, the last producer of high-quality audio cassette tape, announced that it would cease production in 2015. Steve Stepp, president and co-owner of the National Audio, and his people contacted Saehan, securing the remainder of their tape as a stop gap until they could develop their own. National Audio will soon become sole producer of high-quality tape, making them the first U.S. company to do so since the mid’-80s. They purchased a 62-foot, 20-ton, tape-coating line, which had been converted into a machine for making credit card stripes, and reestablished it to produce cassette tape. Gubbey Records received a recent test run from National Audio, and after running it through a spectrum analyzer, Rucinski said it was the best tape in terms of range he’s ever used. National Audio, a company which started in 1969, continues to offer cassette duplication, packaging, blanks and more services, while it nears being able to manufacture its own tape. According to an article in the Springfield News-Leader, National Audio claims to sell to 3,347 recording labels, from small upstarts to Fortune 500 companies, such as the Walt Disney Co., which put in an order for the “Guardians of the Galaxy” soundtrack.

Like vinyl records, tape has made a return in the last decade. But, where vinyl is an expensive product — albeit a quality one — tapes acted as an affordable and quick alternative, which gives an edge to smaller Louisville labels, who primarily issue releases on cassettes, both for aesthetic and practical purposes.

Matt Dodds, half of the team behind auralgamiSOUNDS, has used cassettes from the start of the label, which began a little more than three years ago.

“It was a format we were excited about, and it also very much fit our nearly non-existent budget,” he said.

Cassettes tapes, which have been a pivotal part of indie scenes and popular culture — from hip-hop DIY mixtapes to rock bands trying to put their first few tracks on a physical format — have bypassed death, as they’ve become both practical, and something people like to collect.

“Tapes have absolutely benefited our business, and in fact, they essentially are our business,” Dustin Marcum, of the Obsolete Staircases tape label, said. “I think that cassette collectors inhabit a niche market and it seems like we get many repeat customers interested in collecting our entire catalog.”

With digital media increasing the ease by which people consume music, owning a physical release feels increasingly anachronistic. That sometimes works in the favor of physical formats because of the nostalgia factor. But, as streaming becomes more popular, it’s more simple than ever to listen to an album, like it and never think about it again, because of the ephemeral nature of finding something, giving it an hour of your time, and then moving onto the next album, without ever owning a copy to remind you of its existence.

“For me, it’s a document,” Rucinski said. “It’s owning a document of something you love. Anything that’s on my computer, I could give a shit less about. It might just be my generation.”

Rucinski pointed out there is a distinct characteristic to tape that adds a comforting glow to the recording. It’s an x-factor that you may not recognize until it’s missing, a sonic richness that audiophiles often gravitate toward.

Mirroring Rucinski’s sentiment, Marcum said, “Part of the reason that I’m drawn to tapes is that I think they sound warmer. They have their own warmth.”

And Stepp, the guy who has gone all-in on cassette tape, agrees.

“Your ears are analog,” he said. “Analog music sounds more natural to you than digital music. A digital recording is not an actual recording of a musical performance.” •