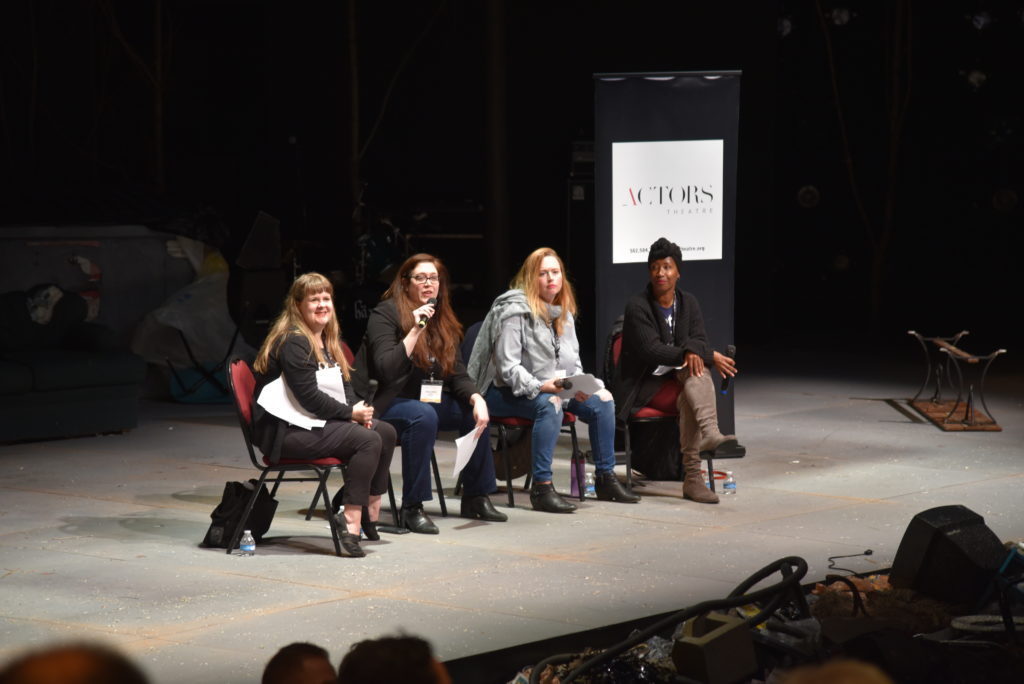 Every year, on the last weekend of The Humana Festival of New American Plays, a horde of industry insiders shows up to check out the new plays, meet up with each other and attend events where the brightest and the best in the field share new ideas about how to make theater better.

This year, on April 6, attendees got a chance to have a talk with Zakiyyah Alexander, Meg Miroshnik, Joy Meads and Kelly Miller, four founding members of a group called The Kilroys.

Started in 2013 by a group of 13 women in Los Angeles, The Kilroys work to help theater overcome an historic bias that greatly favors white men in positions of power and creativity. This work, with deceptive simplicity, consists of publishing a list of plays written by women and trans playwrights.

At the start of the event, Meads, Alexander, Miroshnik and Miller sat in the Pamela Brown Auditorium, on chairs placed in the midst of the set for “Evocation to Visible Appearance.” The set was made of refuse, debris and broken furniture and sort of made them look like they had just literally smashed some bastion of the patriarchal world and were sitting in the rubble.

“We’re gonna talk about what we’ve learned, about how to create a DIY activist movement,” Meads said. “Then, at the end, we’re going to transform this room, into a mighty brain trust.”

Before the brain trust got going, they talked about how the Kilroys formed.

In addition to their Kilroy cred, these four women have extensive and impressive resumes. We don’t have room for their full CVs, so here’s the ultra-short version.

Alexander and Miroshnik are award winning playwrights. Meads and Miller are generally on the other side of the new play process, doing work in dramaturgy, development and representation.

The Kilroys’ big idea to fight sexism and bias in the industry seems simple at first glance — they published a list of unproduced or under-produced plays by women and trans writers.

That simple action made waves, getting news coverage on three continents and helping a lot of those plays get on stage. The group has published another list every year since.

A plan and action

“I’m here because the writer Annah Feinberg threw a party, and she invited me. I had never met her, but I showed up,” said Miroshnik. During Feinberg’s party, a series of conversations turned serious.

“We decided we were done talking about gender parity and were ready to take action,” said Meads.

And that was the birth of the Kilroys. One of their first guiding principles was to keep their goals simple.

“We focused on one specific aspect of the problem,” said Meads.

Frequently, when a wide slice of the powers that be are asked why they produce mostly plays by white dudes, they come back with the same answer: There just aren’t enough good plays by women.

The answer was infuriating to members of the KIlroys, many of whom interacted personally with many great plays by women — plays that couldn’t get produced.

“We never again wanted to hear ‘but the plays aren’t there,’” because that’s a lie. And we never wanted to hear, ‘Oh, we just produce the best play,’” said Meads.

So the idea of the list was born. A simple resource, a tool kit, that would make sure no one would need to say that again.

Many theater companies really wanted to do better, but needed help. The list could help them. And those companies that really were just making excuses would have to answer some tough questions.

“We went out to over 330 industry folks” said Miller. “We talked to artistic directors, associate ADs, directors, actors, dramaturgs and asked them to please nominate their favorite three to five new plays by women, unproduced or under produced.”

That list of industry folks includes ATL’s own Les Waters, and we’ve seen several plays from the list show up on stage locally, including “We, The Invisibles.”

It was a little frightening the first year, according to Miroshnik.

“It’s hard to remember this now, but it felt like a risk,” Miroshnik said. “Some people were hesitant to be nominators. We had to leverage our personal relationships a lot.”

There also wasn’t a budget. So the members had to do work they hadn’t necessarily done before.

The group was calling in favors and learning new skills, but they weren’t really sure what they were going to get when the nominations came back.

“Were we going to get 50 of the same plays nominated, and like 50 votes for the thing that was just the New York Times’ beloved hit?” asked Miller.

Instead, they got over 300 plays nominated that first year. They made a list of 45 plays, but also ended up sharing all the nominees online, to spread the word of as many good plays as possible.

After the first year, and the success followed, the Kilroys tried to always shake things up. The second year, they asked as many different nominators as they could, reaching out to less prestigious companies in the middle of the country. The next year, they let the nominators choose themselves — anyone who had read more than 40 new plays could weigh in. The year after, that they sought to push back against sexism and racism, and limited the list to women and trans artists of color.

These steps, and the group’s entire history, points to a lot of the methodologies and beliefs. They don’t hold on to personal power. They don’t serve themselves. Instead they serve the movement they started.

Towards the end of their presentation, Meads brought up another change in the methodology that was coming down the pipeline.

“Some of you may have seen a little announcement we dropped recently, where we are recruiting new cohort of Kilroys. We’re at a moment when we’re think about passing the torch.”

They know that their ideas and points of view are limited. So they’re eager to welcome the next generation.

After the presentation, the Kilroys opened the floor to the “brain trust” of the audience. From the way hands shot up with questions and ideas, it seems like the next generation is ready to step in.

You can find the Kilroys online at thekilroys.org.