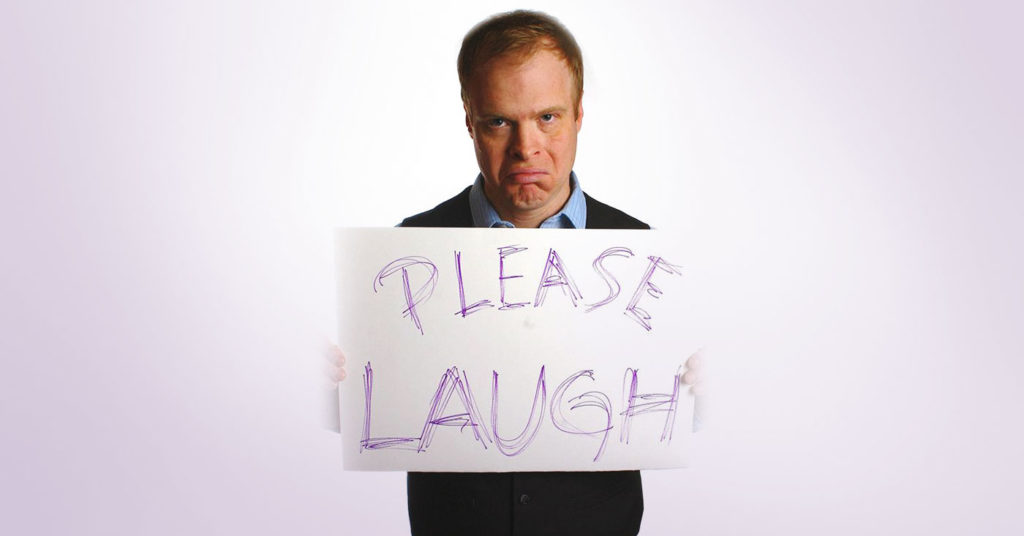 It didn’t take comedian Danny Browning long to recall his worst show. It was the time when he was run out of a gig in South Carolina after commenting on why the state was still flying a Confederate flag over the state capitol. “I’m white — I should be cool with white supremacist dudes. And, apparently, that’s not necessarily the case. They made it very clear they were offended,” he told LEO. Browning headlines The Caravan this week.

LEO: Looking back on your childhood in Indiana, were you a happy kid?
Danny Browning: Look, man, if I had too happy of a childhood, I probably wouldn’t need to be a comedian. But it wasn’t horrible. A lot of kids had it worse than I did. I understood in the first grade that if I made people laugh, they would be my friend. By the time I was 12, I was watching stand-up and thinking: ‘What a cool job.’ Never once did I doubt that I could become one, either. Eventually, 20 years ago this year, I did my first open-mic.

Twenty years ago? You must have been a baby.
Yes, negative 7, actually. This year, I’ll be 13 years old. Wait, they didn’t tell you that you were speaking with a comedy prodigy?

Somehow that got past me. How did that first open mic go?
I was supposed to do three minutes, but I didn’t understand the light, that when I saw it, I was supposed to get off. So I ended up doing seven minutes. I had props. I remember doing a joke about how people should eat Spam on a stick. And I actually had Spam on a pretzel rod, trying to convince the audience of it. But to answer your question, it was all right. I didn’t bomb, I didn’t kill — it was fine. I remember I was wearing a blue, striped shirt, shorts and these big goofy glasses. My hair was an exploding mess of — let’s not talk about it. I was 21 years old and didn’t know what the fuck I was doing. It’s been a long time since I thought about it. Thinking about it right now is making me uncomfortable. Had ‘Now Danny’ seen that, he would be like, ‘Oh, this kid better study harder in school.’

Was that your worst gig?
Oh, no. That one was just uncomfortable, because I didn’t know what I was doing. There were a lot worse gigs than that. One time in Simpsonville, South Carolina, I was making fun of the rebel flag. At the time, South Carolina was the only state still flying the rebel flag over their statehouse. They were the only one left! All I said was, ‘C’mon, don’t you think it’s time you all try to fit in with the other 49 states?’ I wasn’t even trying to be funny. I was just a guy who never bought into the rebel flag. Or I had enough education to know that it never means anything good. I figured, I’m white — I should be cool with white supremacist dudes. And, apparently, that’s not necessarily the case. They made it very clear they were offended. The bartender was like, ‘Hey man, you should probably leave.’ He was pretending to care about my well-being. Really, he just didn’t want to clean my blood off the bar. And those guys followed me all the way out to my car.

To many of us on this side of the river, Indiana is a mystery. What are we missing?
For me, tranquility. It certainly doesn’t have the energy of downtown Louisville. It doesn’t have the ambiance of The Highlands. And admittedly there are parts here that could be more diverse. But yeah, it’s tranquil.

Does that make up for former Gov. Mike Pence?
Oh, my God — no, it doesn’t. That’s the part of Indiana we try to leave out of the brochure. But I will since ol’ Mike Pence got out of Indiana, and now we get to buy beer on Sundays. We don’t have to drive to Kentucky for our Sunday liquor anymore. But yeah, Indiana is proof that if you get rid of ‘Pencey,’ progress can be made. Washington might wanna take note.

Having lived under him as a governor, were you even more freaked out when he joined the ticket?
Actually, at the time I wasn’t. I was happy he was out. There was no way I thought he was going to be vice president. So when ‘Trump-o’ picked him up, I was like, ‘This is glorious! He’s out of here, and he won’t be vice president. Things will be normal again.’ Yeah, fucking right.