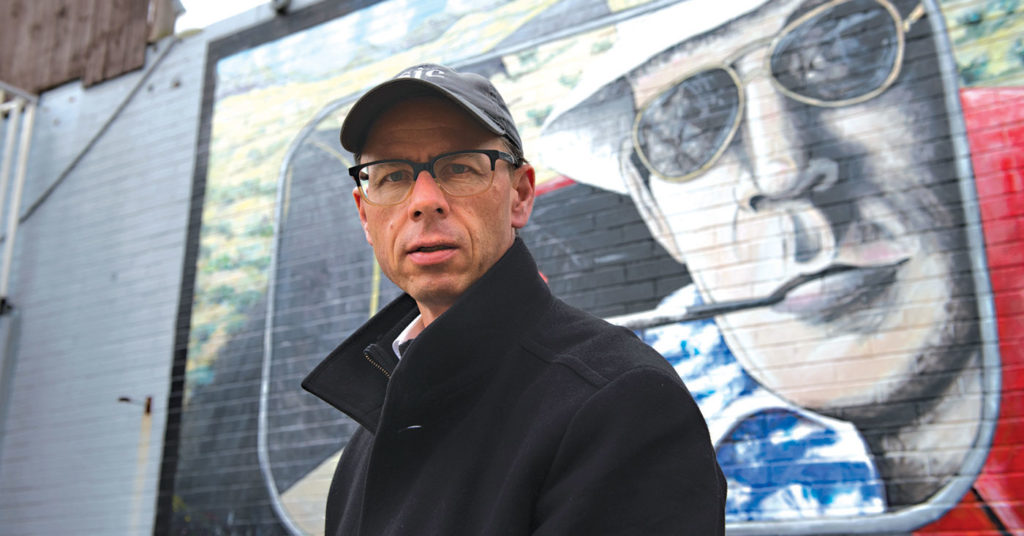 There’s not even a hint of the boozy, wild-man persona of his literary icon father, Hunter S. Thompson, who was run out of his Kentucky home at age 17 and rarely looked back. Instead, the soft-spoken 54-year-old I.T.-guy-turned-writer across the table sipped raspberry tea in a button-down and sweater and said he’s almost never recognized in Louisville since moving here.

For much of the last year, Juan F. Thompson has been living quietly, almost incognito, in his father’s hometown, within walking distance to the famed Gonzo writer’s Highlands childhood house near Cherokee Park. He left his longtime home in Colorado after falling for a woman at the city’s GonzoFest two years ago, he said last week at a Highlands coffee shop.

He’d never remotely considered living in Louisville, a city that bore his father but was rarely mentioned as Juan grew up outside of counter-cultural Aspen, Colorado, where Hunter settled in the mid-1960s and Juan endured a difficult childhood crammed in among Hunter’s eccentric friends, guns, whiskey and typewriters in Woody Creek.

After overcoming a painfully shy and lonely youth, living in the neglected shadow of his celebrity father and his parents’ drinking, drugs and eventual divorce, and even taking acid with his mother at age 14, Juan put down roots to create his own decidedly-normal life with an office job in Denver, a wife and a son. It was there that he finally developed something of a relationship with the father he called “Hunter” as his health and writing powers declined ahead of his suicide in 2005.

“I never would have expected to be moving here,” Thompson said, noting people think he’s moved back home, even though he never lived here. “Louisville, of all places.”

Once here, though, he decided to take a more active role in his father’s legacy to ensure his literary and cultural contributions are not subsumed by his one-dimensional, Raoul Duke caricature that dominates some portrayals of him, including the film version of “Fear and Loathing in Las Vegas.”

“When he died, I felt an obligation to carry his legacy onward, then realized, first of all that’s a huge burden I am not suited to try to carry and it’s also an arrogant thing to think you can shape someone’s legacy. There are so many people out there with their own ideas of who he was. I also did not want this to become my whole identity,” he said.

His role may have been made clearer after finally completing his 2016 book, “Stories I Tell Myself: Growing up with Hunter S. Thompson,” which took nearly a decade to write, as he bounced between anger and longing toward his father. He worried that he would either lionize him, or vilify him. He’d spent decades trying to forge a relationship with a father who was often absent, cold or terrifying, despite moments of bonding while cleaning guns or riding motorcycles. The ties grew when Juan married and had a son, who is now studying at St. John’s College in Santa Fe, and developed further as Hunter aged, struggling with alcoholism, ill health, the loss of his ability to write and even incontinence before his death. Juan was in the home when his father shot himself.

Even after his death, Juan wasn’t sure if he could write under the oppressive weight of his father’s literary and cultural reputation.

“I avoided seriously considering writing for a long, long time because of that. The fear of being compared,” he said. When the book came out to positive reviews, in his own voice, “it was a huge relief.”

Finding himself on the shores of his father’s childhood has also given him impetus to explore a part of his father’s life that, for him, was largely a blank spot on family maps.

“He never talked about his childhood,” he said. “For some reason, it feels really important to figure out who he was as a child and a teenager, before he became Hunter Thompson.”

Juan spends time walking in Cherokee Park, as Hunter once did. He digs through historical archives, finding the minutes his father took as a teenage secretary of the Castlewood Athletic Club. He drives past his grandmother’s home on Ransdell Avenue, where Hunter was raised by a strict father who was an insurance agent until he died when Hunter was 13, leaving his mother to work at the library and turn to heavy drinking.

He talks with childhood friends of Hunter’s to hear about a youth, one of BB guns and bicycles and, later, movies at the Vogue, débutante balls and meetings of the elite Athenaeum Literary Society at Male High School. There was also troublemaking, stealing from a liquor store on Frankfort Avenue and breaking into Highland Presbyterian Church.

He’s also heard more about the notorious incident that propelled his father out of Louisville: Hunter was in a car with two friends in Cherokee Park one night. They stopped at a parked car so one of Hunter’s friends could bum a few cigarettes from a couple inside. Instead, the couple was robbed. While accounts differ, Juan believes Hunter wasn’t involved in the robbery. But police traced their license plate, and Hunter spent time in jail. With a long history of minor offenses, a judge pressured Hunter to enlist in the military or face a longer sentence, Juan said. Hunter chose the Air Force.

“They were all arrested. But two of them came from wealthy families, who were well connected in the legal and political world of Louisville. But Hunter didn’t have those connections,” Juan said. “I’ve thought about that incident. I imagine it made a deep impression on him: If you were rich and powerful, you could escape the consequences of your actions. If not, you’re at the mercy of the system.”

Even though Hunter chose his hometown in 1970 for his seminal “The Kentucky Derby is Decadent and Depraved” piece for Scanlan’s Monthly, the first-person, subjective story in which his Gonzo style found its full form, he rarely talked about Louisville when Juan was a child or went to visit. “He really didn’t keep in touch with his family,” Juan said. Later, starting in college, Juan went on his own to Louisville a few times to get to know his grandmother.

In 1996, Juan traveled to Louisville for a night of speeches honoring Thompson at the Memorial Auditorium, when former Mayor Harvey Sloan gave him the key to the city. Juan joined actor Johnny Depp, singer Warren Zevon and others celebrating his writing legacy, but it would take many more years before Louisville’s GonzoFest, murals and other reminders gained steam for his name to come up among famous hometown residents like Muhammad Ali.

“It makes sense to be doing this in Louisville, where there’s greater emphasis and pride. Which is kind of funny. After so many years of not wanting anything to do with Hunter, they’re proud of him as a native son,” he said. “There’s something about his writing that continues to inspire people. And I don’t think it’s the excessive drugs. There is something about him that represents a freedom, a willingness to challenge convention, expectations and power structures.”

It also makes sense, then, that the woman who drew him here is a yoga teacher and the daughter of the poet and GonzoFest organizer Ron Whitehead. Juan said the pair hit if off at the festival and “did the long distance thing” for a while before he decided to join her.

The transition to Louisville for Juan, leaving family and friends, has been a “huge adjustment.” “I lived in Colorado basically my whole life. And, moving to — I don’t know what you call this, the Midwest? It’s not the West, for sure,” he said. But Louisville “is a good place to be,” he said. “It’s a pretty liberal town. A lot of arts going on. It’s a really pretty city, too.”

For now, Juan — seeking his own voice, even as he can never fully escape being the son of Hunter S. Thompson — spends days working toward a new book, trying to make a life out of writing.  It’s given him new appreciation for his father’s labors. Too many people think he only had to drink whiskey and sit at a typewriter, he said. “Writing is hard. I do not sit down like, ‘Oh boy, I get to write today,’” he said, laughing about one of his father’s lines that called writing “the flip side of sex — it’s only good when it’s over.” •