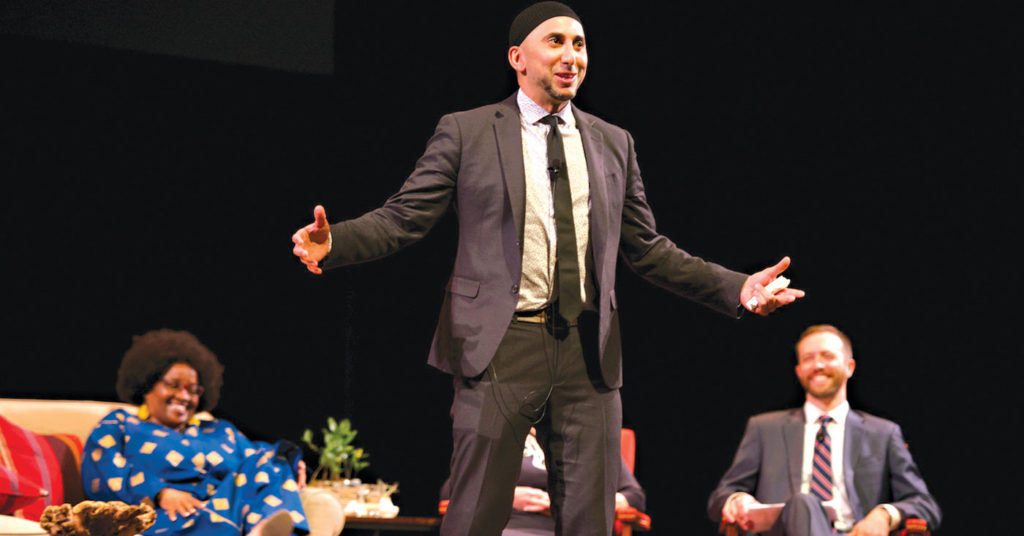 Rami Nashashibi speaking at the 2017 Festival of Faiths. Photo by John Nation

Don’t let the name fool you. Louisville’s Festival of Faiths encompasses more than just religion. Returning for its 23rd cycle, the five-day event consists of sessions ranging from spiritual introspection to social inequality. Activists, academics and faith leaders from around the world will converge April 24-28 to examine this year’s theme of the Sacred Feminine. Mix in nightly performances of music, dance and other forms of art, and you have a celebration that both nuns and nones (those who don’t identify with a religion) can appreciate. LEO sat down with some of the staff from the Center for Interfaith Relations, the organization hosting the Festival of Faiths. Managing Director Sarah Reed Harris, Director of Media and Marketing Mustafa Gouverneur and Coordinator of Communications and Marketing Rebecca Katz reflected on the meaning of the festival and the importance of such dialogue today. Their edited comments appear below.

LEO: What does the Festival bring to Louisville, and what does Louisville bring to the festival?
Mustafa Gouverneur: We often say we are a platform for conversations on meaning in a time of multiple crises of meaning. We talk here in the office of crumbling cosmologies, this quest for meaning in this time … So we bring these thought leaders from all around the world and also local people of which there are so much talent and so much intelligence and consciousness … And we’re having it not in L.A. or Brooklyn. We’re having it in Louisville, Kentucky. And for so many reasons, that’s part of the message.

Sarah Reed Harris: The terminology we often use is that Louisville is a learning lab, and we are hospitable by nature, and we share our learnings with a broader community, but we bring some of the world’s most profound thinkers and some of the greatest experts on a particular theme here to host dialogue and to host authentic dialogue, real dialogue rooted in contemplative practice. So it’s not superficial dialogue. It’s done through a way of deep understanding and deep insight.

How can sharing and understanding other faiths impact divisiveness that is so prevalent?
SRH: Not only do we have interesting discussions on contemporary issues, but we try to infuse our programming with practices and skill sets that help deepen your encounters with the world and your sense of connection with each other. And it’s only through that that we realize we are not divided.

MG: Thomas Merton said we are already one, but we think we are different. And he tasted that experientially just around the corner from here. He saw another dimension of realities.

What can atheists and those who don’t fall under a particular faith learn from the festival and its speakers?
SRH: The most recent Pew Research says more than half of our population both locally and nationally would consider themselves an atheist or a none … Everyone is seeking meaning. Everyone is seeking that depth. Not just intellectually, but they want that emotional depth and the spiritual depth … We believe by offering all perspectives on our stage and offering them in dialogue and communication with each other that everyone has access. Everyone’s voice has a place in this conversation on meaning. We just hope they’ll give it a shot.

Rebecca Katz: Wisdom is wisdom. It’s not like you are going to come to the festival and get preached at … As someone who several years ago heard the term Festival of Faiths, I was like this sounds so boring. And it changed my life because it was talking about things I cared about and values … You can learn how people connect and relate to each other from these models that are very old and rich. I think to put it to the side would be a mistake.

Social justice issues, like Black Lives Matter and Islamophobia, are featured in the festival. How do spiritual beliefs shape activism?
SRH: We have a held belief in our organization about the need to balance contemplative practice with social activism … When you spend some time thinking deeply about the significance of your decisions and how you live, you will be moved in a direction of wholeness.

Feminine Wisdom will be explored during this year’s festival. What can current movements such as #MeToo learn from faith traditions of the past?
SRH: It’s not like feminine wisdom is a new concept. It’s ubiquitous. It’s been there forever, but culturally we’ve gotten to a place where we devalue it and we no longer see it, value it, honor it. Basically, it’s a way of taking the veil off or dusting it off and showing it for the beauty that has always been there. So when you look at these faces you’ll see not a lot of them will be recognized by other folks, but they’ve been there all along and they are incredibly profound.

MG: I’d just point to the description we gave in the ‘Confronting Gender: Seeing, Hearing and Valuing The Feminine.’ We face many grave spiritual and cultural imbalances caused by our devaluing, oppression and ignorance of the feminine. Discrimination, bias and assault based on gender/identification is a global and systemic condition. Understanding, lifting up and integrating the feminine may result in a new understanding and re-spiritualization of how we look at the world and ourselves. How can we more fully reconnect and restore feminine wisdom to our collective and cultural consciousness as a fundamental way to heal our wounds? How would the world look with a realignment of values and the reinfusion of the feminine? That’s a serious question we’re asking and we’re interested in everyone to join this conversation. •

The Festival of Faiths

Where: The Kentucky Center and Cathedral of the Assumption

Individual session tickets and festival passes may be purchased online at kentuckycenter.org/all-shows/2018-festival-of-faiths. Sessions may be viewed for free at youtube.com/user/FestofFaiths.

Ruby Sales
Founder of The SpiritHouse Project, theologian and human rights activist who focuses on issues that include “the deaths of African Americans by white police, security guards and vigilantes, for which she has compiled a national database on these events.”