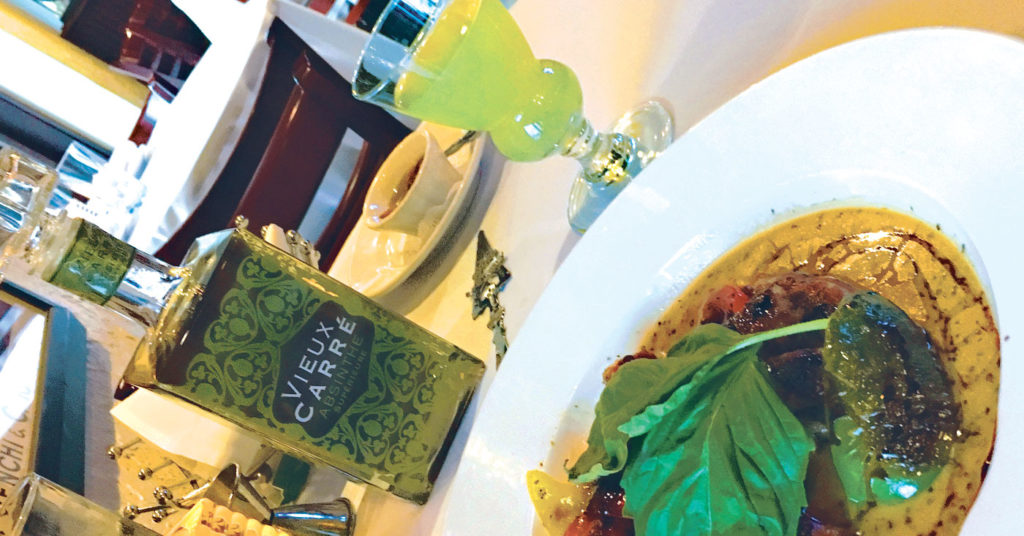 A bottle of Vieux Carré absinthe and a fennel-and-oregano-scented Italian rope sausage with charred peppers At Volare on Frankfort Avenue.

In case you missed it, Monday, March 5, was National Absinthe Day. But it’s not too late to celebrate. Associated with artistic and literary Paris of the Belle Époque, perhaps no other sip offers the heady combination of ritual, danger and (for a time) illegality.

In order to drink absinthe properly, you need the right equipment. First is the slotted absinthe spoon, which is placed over an absinthe glass. (This looks a bit like a sundae glass, only about half as tall.) The glass should contain about an ounce of the dark green liqueur. Place an oblong double sugar cube on the spoon, and slowly pour three to four ounces of ice-cold water over the sugar so that it dissolves into the liquid. (Note: many modern absinthe connoisseurs eschew the sugar.)

As the tendrils of water mingle with the absinthe, the liquid turns a cloudy, pale green, known as the louche. This phenomenon is also known as la fée verte — the green fairy. And drinking absinthe came to be known as “dancing with the green fairy.”

Those who danced with the green fairy not only included Oscar Wilde, but also Vincent Van Gogh, Ernest Hemingway, Henri de Toulouse-Lautrec (who loved it so much he kept a cylindrical flask of it in his hollowed out cane), Arthur Rimbaud and (in our own time) Goth rocker Marilyn Manson and Louisville’s own gonzo journalist, Hunter S. Thompson.

“The Absinthe Drinker” was the name of several different paintings by Degas, Picasso, Manet, Munch and more. All feature depictions of markedly unhealthy-looking men or women seated at café tables, staring into cloudy green glasses of liquid. Absolutely none of them would have remotely qualified to grace a box of Wheaties.

Which brings me to the reputation of absinthe as being dangerously, even poisonously, potent. One of its key ingredients is the herb wormwood (Artemisia absinthium), which not only has a name reminiscent of a villain from Harry Potter, but also contains the chemical thujone, a toxin that can produce seizures and death. While the amount of thujone in absinthe is extremely small, this is the reason that, for a time, absinthe was banned in the United States and parts of Europe.

The much more likely cause for absinthe’s hallucinatory and poisonous repudiation is that it is typically bottled at 130 to 180 proof. Yow!

For comparison — some barrel-proof expressions notwithstanding — the majority of our beloved Kentucky bourbons weigh in between 80 and 100 proof. In short, this is why conjuring the green fairy with water, which dilutes the liqueur to about the same proof as a glass of wine, is necessary. It probably wouldn’t be a bad idea to eat something with it, too.

But what to pair with absinthe, which takes most of its characteristically strong licorice flavor from its other key ingredients — anise and fennel seeds? The absinthe drinkers pictured in the paintings offer no clue. They contemplate solitary glasses.

Usually, to match foods and beverages, you look for either contrasts or amplifications. I decided on the latter to find a dish to pair with absinthe, since the flavor of fennel was so prominent. Ironically, this led me not to a local French restaurant, but to Volare on Frankfort Avenue, where absinthe graces the spirits list and a fennel-and-oregano-scented Italian rope sausage with charred peppers is among its appetizer offerings.

Vieux Carré is the brand here. Distilled in New Orleans, Vieux Carré is also the Francophone name for that city’s famous French Quarter and it is no coincidence that NOLA’s signature cocktail, the Sazarac, contains absinthe. In addition, the very atmospheric bar, Old Absinthe House (in a building dating to 1806), is located in the heart of Vieux Carré at the corner of Bienville and Bourbon streets.

I found that about three and a half parts of water (dribbled through an Eifel Tower-shaped spoon) to absinthe brought out the best in Vieux Carré, releasing layers of slightly bitter wormwood, sweet mint, fine licorice and light floral notes. The clear green liqueur became an opalescent pale sage with water.

And the Italian sausage had just enough, but not too much, fennel to be a good match with the absinthe, providing a fine protein pick-me-up to fuel my dance with the green fairy. •