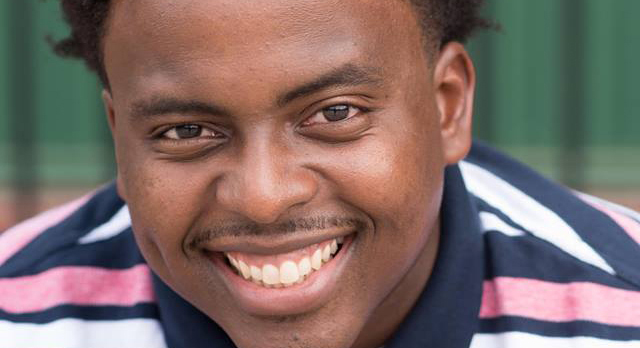 Teacher turned stand-up comedian Damon Sumner doesn’t mind tough crowds, whether it’s a club filled with tipsy adults or an elementary school classroom filled with heckling kids. “Adults, they’re going to go home and live their life,” said Sumner. “I’m just a comedian acting a fool for a night. But with students… they play you, but they’re cute, so it’s cool.” He will be in town this Friday night at Monnick Beer Co.

LEO: How did your Southern upbringing influence your sense of humor?
Damon Sumner: I know my family was always really funny. When we were at reunions and holidays together, we were always cracking jokes and making fun of situations. Also, it was school — school was big for me — because that’s when I realized I like to make people laugh.

When did you know making people laugh would be your career?
That wasn’t until after college. I wasn’t like most comics whose parents had ‘Pryor: In Concert’ albums laying around. I didn’t really discover stand-up until I was in high school. Then, I went to college in Atlanta, and my buddy and I challenged one another to go up and do an open mic. That’s when it all became clear. I had a lot going on in my life: I was married, I had a kid on the way and I didn’t know what I wanted to do. After the open-mic, I knew what I had to do. Looking back, that was probably not the obvious risk one should take when they’re starting a young family — but they aren’t starving, so I’ll call it a wash.

Being a comedian, do you let your kids get away with more than usual parents?
Hell, no. I love my kids but they aren’t right. They do ridiculous shit, and then hit you with those sweet eyes. That’s when you have to be firm. It’s so hard. God, is it tough, but you can’t get broken by their sweet eyes. They don’t mean it, there’s nothing sweet about that look. They just know you can’t resist it. They’re evil geniuses.

You were an elementary school teacher. Which is harder to control a class of 5-year-olds, or a drunk audience in a nightclub?Definitely kids. Adults, they’re going to go home and live their life. They don’t need me, I’m just a comedian acting a fool for a night. But with students, you’re with them a lot. You create a really strong bond there. Sometimes they play you, but they’re cute so it’s cool.

What’s your funniest story from each?
In school, one time I was taking the kids out for recess. I had a bag of supplies with balls and stuff in it. Not even thinking, I looked at one of the kids and said: ‘Mike, can you pick up my balls?’ I lost them. I lost control of that class for a solid 20 minutes. There was no coming back from that. That’s the only time I killed with a crowd of kids. And then a few weeks ago at a club in Atlanta, I had a lady so drunk she passed out and hit her head on the way down to sleep on the floor. I’m not sure if that says more about her state of intoxication or my material, that she’d rather take a blow to the head and sleep on the floor than listen to me.

You toured China for a year doing comedy. What would they find funny that we wouldn’t?
Not much really. It was a really good opportunity for me when it came to writing. To explore what it is that makes us all human, what keeps us all connected, in a sense. And I focused in on that. The only thing I had to steer away from was pop-cultural references — because our idea of pop culture and theirs is very different.

A lot of comedians have been flocking to podcasts. Why is that medium so enticing to comedians?
There’s something relaxing about it. You’re there with your friends just talking. It’s pressure free. You’re not looking for laughs all the time like when you’re on stage. Sometimes when you’re looking for laughs, it covers up the truth. So when you’re free to speak truth, most of the time the laughs come with it.

‘Fourth and Ten’ is your sports and comedy podcast. UofL has been in the news a lot, what would you say about our predicament?
It’s difficult, but it’s enlightening. There’s so much going on with the NCAA and college sports. They didn’t do anything any other team on that level wasn’t doing. And there’s no way people don’t know what’s happening in the game, especially the big dogs like the coaches. So it’s all fun and games until the consequences come out.