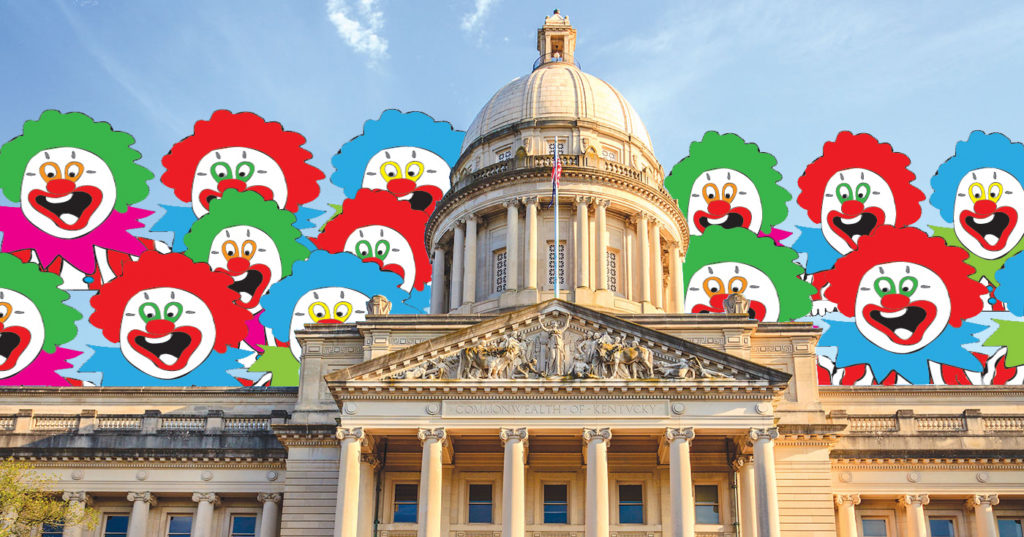 The 2018 session of the General Assembly came to a crashing close over the weekend, as Republicans (almost exclusively) overrode Gov. Matt Bevin’s vetoes of their budget and tax bills. Bevin proved (again) his fecklessness and idiocy by first claiming that children would be sexually assaulted and poisoned because teachers had left their classrooms to protest in Frankfort over the budget bill (they were in support) and pension bill (they hate it). And then he issued an apology-non-apology (blaming people for misunderstanding him). In the end, the 2018 session revealed a GOP in disarray, unable to break from its same-old mantra of no (or few) new taxes, but still spending enough to (maybe) not outrage voters in a reelection year. Democrats pissed and moaned on the sidelines, hoping chaos, teacher outrage and the Trump stain will propel them back into control of the state House and Senate. Here are other lesser-publicized bills that made it, or not:

Abortion
Bevin signed into law a bill to bar, except in emergencies, abortions called dilation and evacuation. Typically, they are performed after 11 weeks of pregnancy. An ACLU lawsuit succeeded in blocking enforcement until a hearing in June. This is all part of a GOP national strategy to block women from getting legal abortions.

Medical marijuana
Increasingly, Democrats and Republicans are pushing for legalization of medicinal use of pot. Certainly, such a law would have helped Kentucky’s pension crisis, but the bill stalled in committee. Bevin has said he would support such a bill if it includes proper regulations.

Solar power
Environmental activists managed to send an anti-solar power bill where the… well, you know. The bill would have cut back credits for solar users who generate surplus power. It was backed by utilities. What a surprise…

Gangs
Rather than help keep people out of gangs, lawmakers decided to lock up more. The bill would make gang recruitment a felony for adults. The legislature denied Sen. Gerald Neal’s request for a racial impact study before passing it. “We don’t know whether it’s sound policy or not, but I’ll tell you something we do know — we do know historically that policies adopted by the legislature have been adverse to the interest to some of our citizens, and much of that has been done on the basis of race and economic status,” Neal said, according to Courier Journal. It is expected to cost the state about $19.5 million. Mayor Greg Fischer was among those in support.

Sexual harassment
Bevin blamed former House Speaker Jeff Hoover for derailing his pension plans, after CJ revealed that horn-dog Hoover had sent inappropriate texts to a female staffer (resulting in a secret settlement). Yet the legislature failed to pass any legislation to prevent and handle any such future scandals. Senate President Robert Stivers said, “We want to get it right.”

Child brides
Anyone under 18 now is prevented from getting married, although a judge could approve the marriage of any 17-year-old after hearing from parents. As it stood, the law allows marriage for 16- and 17-year-olds with a parent’s permission and under 16 if a pregnancy is involved.

Breweries
Lawmakers passed a bill that increases what breweries can sell onsite to three cases and two kegs per customer. Also, they can sell one case per customer at fairs and festivals in wet jurisdictions. Bevin signed it into law.