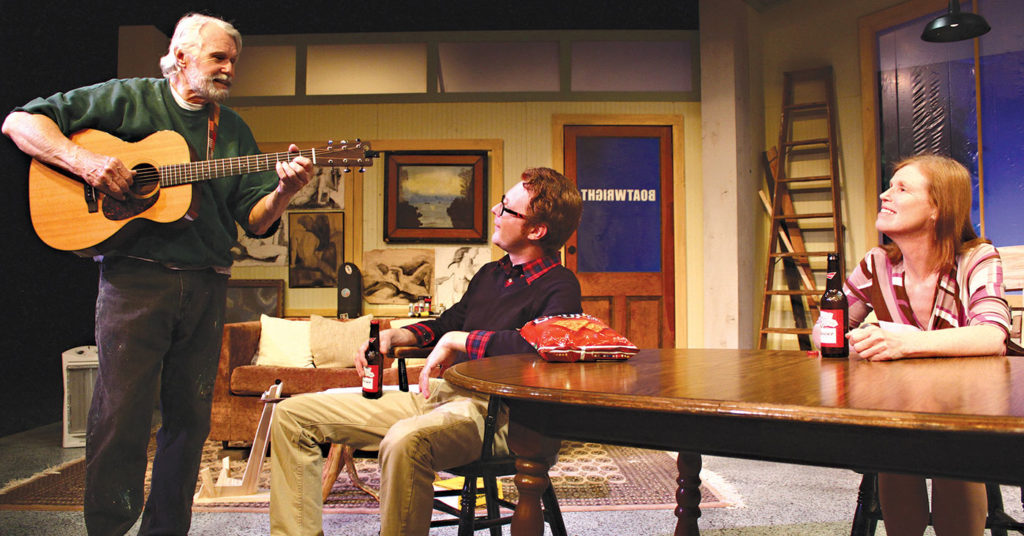 The Banks Dory is an iconic example of American small boat design: easy to build, simple to handle and well-adapted to all sorts of conditions. In the 19th century, one writer described the Banks Dory as, “swift, easily handled, capacious and safe and, if properly handled, hard to capsize.”

You could say the same of Patrick Tovatt’s new play “Boatwright,” which is having its world premiere in a graceful, engrossing Bunbury Theatre production directed by Juergen K. Tossmann.

A dory — still under construction — is part of David Weller’s fine set design (the boat is being built by Tovatt, Mike Burmester and a local crew).

Tovatt is not just a builder of boats. He’s also a veteran actor and singer-songwriter. His career includes 14 seasons at Actors Theatre of Louisville; and over a decade (and an Emmy nomination) in TV daytime drama. And his playwrighting credentials include two works produced as part of the Humana Festival of New American Plays.

In this production, Tovatt plays Ned, the Boatwright of the title. He’s a guy who putters in his shop, stopping occasionally to pick up his guitar and work on new songs. His life pulses comfortably to a well-regulated rhythm.

But that changes when a young man named Gage (Francis Whitaker) walks through the door and starts pestering Ned with questions about boatbuilding. Gage, like Ned, is a builder — but he uses a computer keyboard and builds in the binary world of ones and zeroes. That’s grounds for a clash — and the two men leap into a witty, well-wrought debate about the nature of work and boats. And somehow Gage persuades Ned to give him a crash course in how to build boats.

Later that day, Ned experiences another bit of turbulence when Margo (Alice King) — a lover who walked out on him years ago — sails back into his life with a shimmering glow that resurfaces old stories and sets romantic sparks flying.

It’s a romantic comedy, but Tovatt doesn’t yield to the usual clichés. In boat-speak, the word “tender” describes a vessel that is unstable. When empty, the Banks Dory is a classic example. But it’s when it’s carrying weight — freight or passengers — it’s as safe as houses. “Boatwright” is that kind of tender — a vessel that brings people aboard and sets out on a common journey.

Under Tossmann’s direction, the performances are wonderfully clear and natural. And overall this is a wonderfully seaworthy production thanks to excellent production values (Gerald Kean, lights; Hannah Greene, costumes; Rebekah Aebersold, props; and Bob Bush, scenic carpenter). And the production itself is a notable reunion: Tovatt, King, Director Juergen K. Tossman and Set Designer David Weller all worked together at Actors Theatre of Louisville earlier in their careers. •

The UofL Department of Theatre Arts is wrapping up a season with a splendid production of Paula Vogel’s “The Long Christmas Ride Home.”

The department’s season highlighted plays written by women — and though all the productions I saw were superb and challenging, this one, directed by Geoffrey Nelson and Charles Nasby, with choreography by J. Ariadne Calvano, is a tour-de-force rendition of a challenging contemporary work.

Vogel’s script juxtaposes Thornton Wilder-style narration with Japanese Bunraku puppetry and eclectic post-modern musical settings to explore an incident in the life an American nuclear family at Christmas in 1964 — and the way that incident ripples through time to the late ‘80s.

The parents are played by Lauren Dobbs and Zach Stone — both of whom handle the intricate rhythms of Vogel’s complicated narration with virtuosic control. In the first half, the three children are represented by wonderful puppets — each controlled by a team of three puppeteers, one of whom will play the child in the second act (the actors featured in the roles are Bridget Kim, Bridget Thesing and Dylan Garrett).

In a series of episodes, we see the family packed into a car as they travel, first to a Christmas Eve service at their Unitarian Church, then to their grandparents’ (Adama Abramson) home for dinner and then home. Along the way, we learn of the mother’s desperation and her husband’s adultery. The Unitarian minister (Bailey Story) revels in worldly images from the sensual “Floating World” period of Japanese art. And then, at dinner, a not unusual childish tiff sets off a chain of events that culminates in a bitter moment that will resonate through the lives of all the children.

It’s impossible to overstate the intense dramatic impact (enhanced by exquisite musical accompaniment from a trio consisting of Greg Byrne, Gabe Evans, John Ritz) of the first half of this play, which is largely related through narration and puppets.

The second half — which reveals how this Christmas incident shapes the lives of the three children — is just as deft and just as adventurous in its storytelling. The children take the stage in their own human forms (though puppetry and shadow images are still used to good effect). And even though Vogel’s 2003 script flags at moments, this is nevertheless an extraordinary piece of theater and a great accomplishment by the UofL program. •

The Bard’s Town Theatre 24-Hour Play Festival operates like this: On Friday evening, playwrights are given a title, a line of dialogue and a prop that must be used. They work overnight to create a short play. On Saturday morning, they get together with a director and cast — and start rehearsing. On Saturday night, they present to an audience.

It’s not a task for the weak of heart. And this year’s audience was rewarded with an impressive lineup of three plays (plus a droll monologue). Alex Feigelson collaborated with Director Vidalia Unwin and actor Francesca Socolick (Feigelson also played a role) in a piece about a scorned woman who hires an Uber driver to take her 100 miles on a comic (and thwarted) quest for revenge against her ex.

Writer JR Greenwell, Director Maggie Hall (who also played a role) and actor Daniel Smith offered a funny, poignant, intergenerational tale of a young girl who uses her computer skills to help her elderly, gay uncle reach out to his long-estranged sister.

Writer Sean Fannin, Director Cameron Murphy and actor Hannah Connally (Fannin also plays a role) also found humor and pathos in a post-funeral debate between two young folks squabbling about the aesthetics of a cheesy funeral — and the legacy of a beloved teacher.

Finally, Doug Schutte (who produced the Festival) offered a droll monologue about a loutish ne’er-do-well who sets out to make a living playing bingo in the company of some senior citizens. •