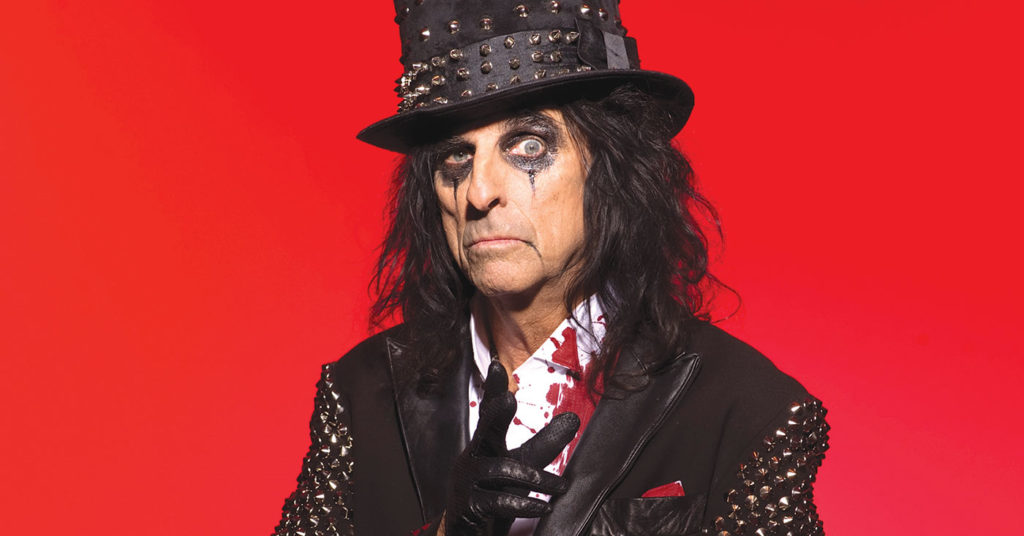 The prototype for modern provocateurs in rock and roll, Alice Cooper recently released his 27th full-length album, 2017’s Paranormal. Five decades into his career, Cooper, now 70, remains active, continuing to make records and tour the world — plus he landed a TV role in the upcoming NBC production of “Jesus Christ Superstar” as King Herrod. Cooper has an eye for theatrics, using the darkness in his subject material to inform a deeper rumination on the human condition. Before he plays at The Louisville Palace, Cooper was gracious enough to give us a few moments of his time to talk about his new album, revisiting his earliest work and staying active and healthy.

LEO: I understand that you recently performed with your original lineup.
Alice Cooper: We did kind of an interesting thing. When the original lineup broke up in ’75, we didn’t break up with any bad blood. Everybody was still friends. I think that we just worked ourselves [to] where we couldn’t work with each other anymore — it was more of a separation than a divorce. We took some time off. We stayed in touch with each other over all these years. In London, I just thought it was a great idea if my touring band did my regular show. Then the guillotine happens, the curtain comes down — and, normally, I’d come out and do ‘School’s Out’ and a couple more songs — and when it comes up, it’s the original band. The audience went crazy, because the original band was so popular over in England and everywhere else, really. And they still play great! It’s fun to work with guys that you went to high school with.

You said that there was no bad blood, and I love that! When you all originally broke up was there an understanding that: We have to do this for the health of our friendship? Was it like that?
Yeah, It was one of those things where once we had like five platinum albums in a row, and we never stopped working. I think we just burned out. Everybody was ready to do something different. We just sort of departed, but we were never at each other’s throat at any time. We did the Rock and Roll Hall of Fame together, we played that night together and realized all the guys could play great! No one had lost their chops really.

What can you tell me about Paranormal?
It really did well. It was Top 20 in 30 countries. I had Larry Mullins Jr. from U2 on drums. Billy Gibbons played on one of the tracks.

Billy Gibbons is awesome! He’s so cool. How was he?
I had this song called ‘Fallin’ in Love and I Can’t Get Up,’ and it was such a Texas, sort of ZZ Top type of song that Bob Ezra and I sent it over to Billy Gibbons, and he did two takes, and it was perfect. It was just one of those songs, that just… he says, ‘I have the flu, but this song makes me feel better.’

I’m curious about ‘The Sound of A’ from the new record. I understand it was one of the first songs you wrote 50 years ago.
It was the first song I ever wrote. In 1968, we lived in Venice, California. It just so happened that the night before, we played with a band called Pink Floyd.

Oh, I’ve heard of them.
Nobody had heard of them at the time, and no one had heard of us. Well, they ran out of money and moved in with us, so we all were living in Venice, California, in a house. I remember going into a room and taking a guitar and writing this song, but I forgot totally about it. So the song is 50 years old. But Dennis Dunaway, our bass player, kept tapes of everything. He brought it into the studio, and he said listen to this. And I heard it, and I said, ‘Hey Dennis, I remember you writing this,’ and he said, ‘You wrote it.’ I could tell that it had a touch of Pink Floyd in it, because they were living in our house at the time.

How was it revisiting you from that time period? It had to be so cool to bring it in and make it fresh.
The problem is that back then, you don’t remember a lot — 1968, living with Pink Floyd, and I think there were some brownies involved. I’m not sure.

You mentioned that it’s a really physical performance. How do you stay in shape?
You do the show. The show every night is like an aerobic. I never smoked cigarettes, and I quit drinking 37 years ago. I’m in really physically good shape, so I can get up and do five shows a week, the way I did when I was 25 years old. Physically, I’ve never felt better. In fact, when I was 25, I was a mess.

So much goes into touring that people take for granted.
You learn how to tour. You learn when to eat, when to sleep, when not to go out, when to go out. I’ve been doing this for long enough to know how to pace myself. Once I get on stage, it’s 100 percent. Then you go for it. But the rest of the day, you can’t go out running around and doing a million things, so I kind of just pace myself.

I know you’re a golfer too. Is that part of your stress relief, with the sobriety and everything?
When I quit drinking, I had to find an addiction that wasn’t killing me. Golf happened to be one of those things. I play six days a week. I play every single day, almost. It’s definitely an addiction. It’s not just a game for me. I’m a three handicap. I do play a lot, and I do play really well. •