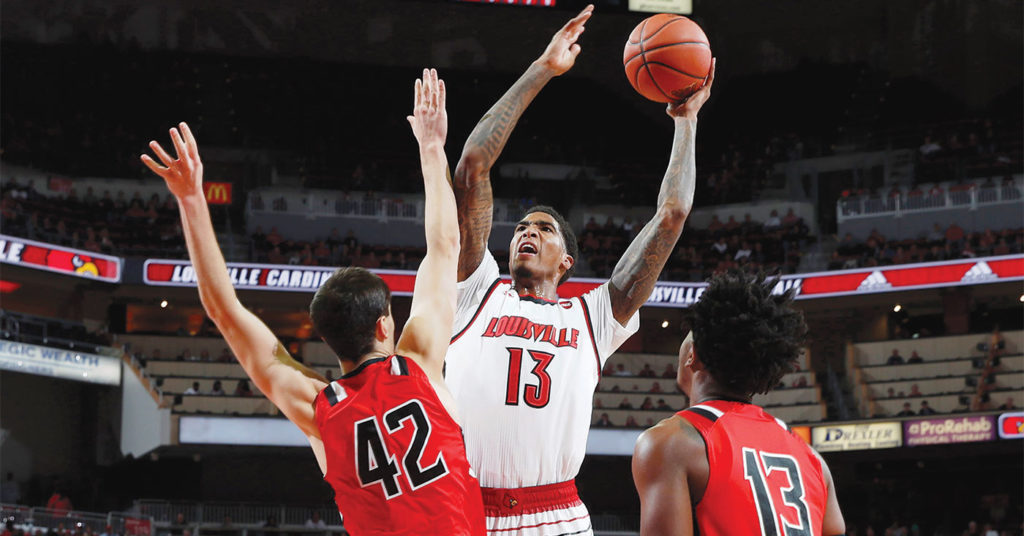 There may be an open space in the rafters of the KFC Yum! Center where the banner honoring the 2013 national championship team should be, but 2017-18 is the real lost season.

When last season ended — too soon after an early-round loss to Michigan in the NCAA tournament — Louisville still seemed poised to be one of the top teams coming into this year. Bleacher Report had the Cards ranked fifth in their “Super-Early Top-25 Experts’ Poll.”

After losing both Donovan Mitchell and Jaylen Johnson to the pros, then a stunning FBI investigation and indictments led quickly to the dismissal of Head Coach Rick Pitino and Athletic Director Tom Jurich… and the party was over. Rome had fallen. Left among the ruins was a fanbase lost, dismayed, tired of the drama and embarrassment.

Former team captain and assistant coach under Pitino, David Padgett became interim-head coach, seemingly overnight and with him came comfort, familiarity and a breath of controversy-free, fresh air. He was likable. He knew this team and they knew him. There was curiosity if not reserved optimism about the season. The returning players were still talented, athletic and experienced, with a promising freshman class of support coming in behind them. This team was good. Maybe there was hope after all.

This roller coaster season saw 20 wins and 13 losses, finishing eighth in the Atlantic Coast Conference, the best conference in college basketball. But that wasn’t enough for the NCAA selection committee.

Card Chronicle writer Mike Rutherford tweeted that Louisville became the first team in history to be ranked top-40 in the RPI rankings, from a major conference, to not make the tournament. Then again, if UofL closes out two more conference wins, they finish tied for third in the ACC regular season. For instance, two overtime losses — one to Clemson and the other to Miami — were on the fingertips before being squandered. Or, one epic collapse against Virginia.

In front of the biggest, loudest home crowd of the season, on senior night, UofL had a chance to beat a conference rival, the number-one ranked team in the country and lock-up a tournament bid. And for a team that wasn’t going to the Final Four, this essentially was their championship game.

For over 39 minutes, the Cards were the better team. UofL was up 4 points with 0.9 seconds left… and they lose.

It took a several mistakes from several players and coaches. It took an insane shot that was more prayer that skill. It even took bad luck and questionable officiating — if there isn’t a phantom lane violation called on the final free throw attempt by Virginia, the clock runs out before they get another shot off.

But everything that had to happen, happened. And just like the entire season, the win that should’ve been, wasn’t.

ESPN commentator Scott Van Pelt said that night following the game, “We can’t verify this, but I’m just gonna say it… no team in the history of the world has ever lost a game in regulation when they were ahead by 4 points with less than a second.”

There are more dark days ahead for the Cards.

Padgett deserves to know about his future as soon as possible. He went from being an assistant coach under the tutelage of a Hall of Fame coach, to leading one of the most-storied college basketball programs in a matter of days.

The truth of the matter is, he should not be UofL’s next head coach. This program desperately needs to bury the skeletons of the past. Louisville needs a clean slate.

Plus, Padgett deserves the opportunity to start interviewing with other programs as soon as possible. He’s a promising, young coach. He’s a great hire for someone. But he’s not ready for UofL. And, how could he be? He wasn’t supposed to be six months ago.

UofL is still one of the premier programs in the country. If it wants to remain there, it has to portray itself as such. This means, similar to when they hired Pitino to succeed Hall of Fame coach Denny Crum, Louisville went after the best coach available. They need to do the same once again.

Hiring Padgett doesn’t say: UofL is one of the elite basketball programs in the country.

No, it says: We’re stubborn, and we’re going to prove we were right all along.

Next year needs to be the beginning of a new era in UofL basketball. It needs to start with a top-tier coach who will get the most out of the players who are here and excite the fan base once again.

Ultimately, so much of what happened to this year’s UofL team was undeserved and unfair — unfair to the fans, players and Padgett. But this year shouldn’t be looked at as a failure, it was an impossible situation for everyone involved. It’s just the season that could’ve been, but wasn’t. It was the lost season.