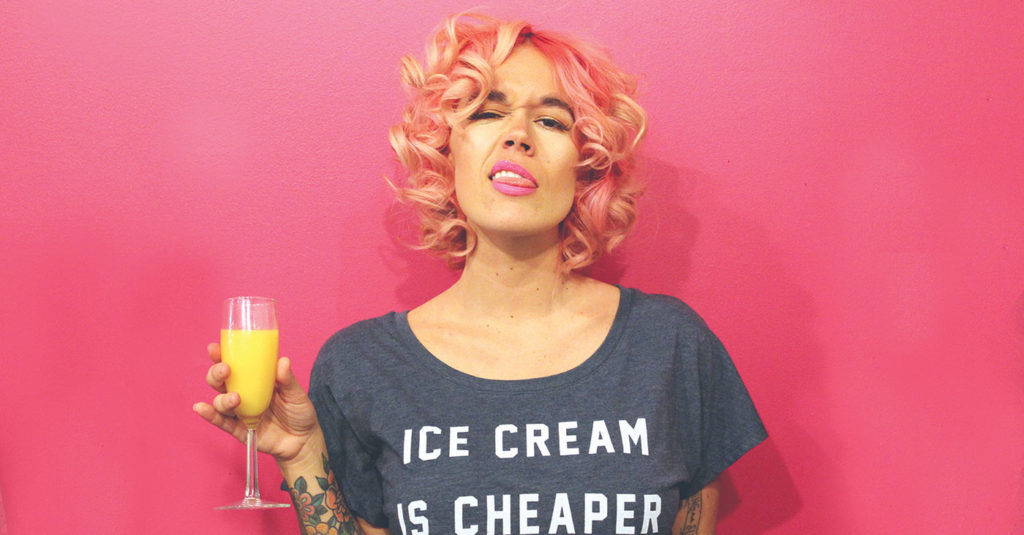 The service industry is full of romances, some that come and go with the death of the latest bar trends or a blurry, after-hours eve, and some that last and grow beautifully like the fermentation of a fine wine. My partner and I met while working for the same restaurant company, and, six years later, we’re still smitten. One of my favorite behind-the-stick love affairs is that of my friends/coworkers Seth and Erin, who met slinging bevvies and were friends for five years before falling hard — think many, many heart eye emojis. I was lucky enough to have been an accomplice in the surprise engagement of a lifetime this past weekend, when Seth popped the question via a romantic proposal soaked in all that is Louisville. Could it be that Seth’s experience in the service industry helped him coordinate the most dreamy of days for his new fiancée? From the new Omni Hotel to The Limbo Tiki bar and to the bartenders who became the day’s moving parts, this barkeep betrothal was certainly one for the books.

The Omni Hotel was a shining and integral facet of this proposal, as Seth had booked a beautiful corner suite to establish as a downtown base and pregame station for Erin and her family (take notes, y’all — this was crucial). My friend Sam and I were given the honor of setting up the suite with the appropriate accouterments, while Erin and her family enjoyed some pampering — such as chocolate-covered strawberries, a carefully crafted Mezze platter and a plethora of libations. The spread was bountiful. When we arrived at the hotel, we knew we could check into the room at 3 p.m., and Erin and her family would arrive around 6.

Plenty of time to create our masterpiece before they arrived, no?

The Omni had different plans, however and the room wasn’t available until almost 5 p.m., igniting quite the panic but allowing us to peruse the spectacular small city that is this hotel. Sam and I agreed we should have drinks while we waited, of course, and meandered toward the Library Bar and then the Speakeasy, both starkly different in ambience, but perfectly curated. I foresee many a Louisville evening penetrating the trap-door painting into the Speakeasy, waltzing through the winding, cavernous entryway to enjoy a game of bowling whilst sipping on an Old Fashioned ordered off the menu that is plastered on an antique Woodford bottle, encircled with equestrian art. Could we be anymore Louisville right now (said in Chandler Bing voice)?!

We checked into the stunning suite and spread the buffet in plenty of time — what can we say? We’re professionals.

Fast forward to a few hours later, Seth had popped the question in the privacy of their home after Erin had spent the day popping around town, having delightful adventures and following his ever-so-carefully planned instructions with her family — an engagement scavenger hunt, if you will. What’s a couple to do to celebrate once they’re engaged, one may ask? Indulge in Tiki drinks while surrounded by their family and friends, of course, and Olivia Griffin, owner of The Limbo (Louisville’s new and only Tiki bar), was delightfully obliged to accommodate our crew. Seth coordinated bottle service (vodka, bourbon, tequila and Tiki punch) with her a couple weeks prior, and while we were originally sequestered to the pink and aqua VIP room, our party eventually poured out into every crevasse of the oasis.

I know, I know — I gushed to LEO readers last month over The Limbo, but since our friends gathered to surprise Erin at the West Chestnut street Tiki lounge, and the entire staff went above and beyond to make it special, my adoration has only grown (along with my love affair with that Mai Tai). Special events and poke bowls are now both on the menu.

As I spoke to my newly-engaged comrade the next evening, who was still glowing from the glorious events from the day before, Seth wanted to stress that he wasn’t a professional at planning an engagement, however his experience in the service industry “helped tremendously in the timing of it all and what to have (available for Erin and family) at each stop,” he said, “and The Limbo definitely took care of us.”

Perhaps it goes to show that when two worlds collide, and one finds their counterpart in life, sometimes curating a day that’ll make that one feel like the most important human on the planet comes together ever so seamlessly.

It was a day of epic proportions to celebrate an equally dreamy love story. I’m already looking forward to Barkeep Confessions: Wedding Edition.