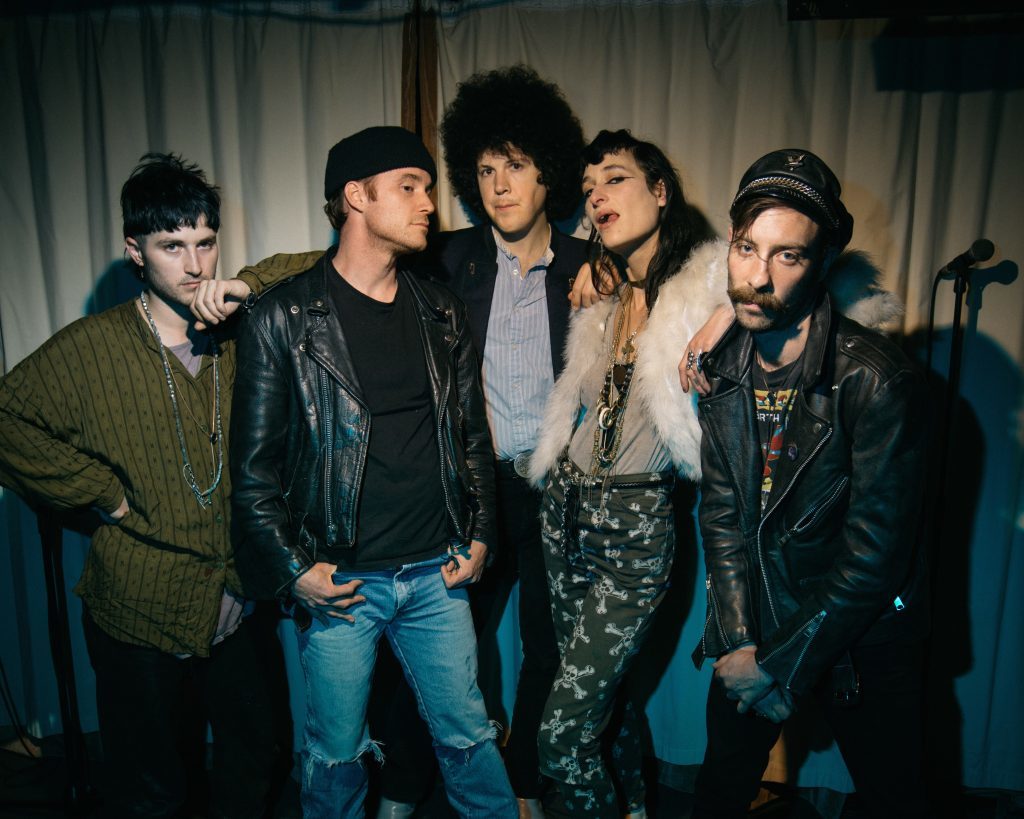 For the creation of Black Lips’s eighth studio album, the five-piece band from Atlanta took to the Catskill Mountains of upstate New York where they recorded in the secluded “magical mountain” home of Sean Lennon and his mother, Yoko Ono. Even after nearly 20 years together as a band and traveling the world, the band found it hard to imagine a more humbling experience than this. “Still even thinking about it is surreal,” said bassist Jared Swilley on the phone.

Cut in one month and released in May 2017, Satan’s Graffiti or God’s Art? is an 18-track blast of fuzzed-out, brassy rock and roll with some sultry interludes and sentimental moments in between (Ono’s blistering screams on “Occidental Front” is not one of them). They play with the Black Angels this Thursday, March 29 at Mercury Ballroom for their first run of shows on a North American tour alongside the Mustachio Light Show.

Before kicking-off the tour, LEO reached out to Swilley to talk more about their isolation in the Catskills, plus an upcoming Black Lips country album to be recorded with King Khan.

Do you feel like Yoko Ono’s creative spirit sort of rubbed off on you during the album’s creation?
Yeah, definitely — the whole spirit of being up there. Where they live is really magical and really secluded. There’s this overall giddiness of being up there. The whole time I just felt really creative. I never carried my wallet on me for a month, never looked at the time, never had my phone. You get kind lost in this magical mountain world with all these people that you really love. Just looking back on it, I’m smiling at all this shit. We kind of left reality for a while to do that… If I wasn’t in the studio, I was out hiking.

What is the hiking like up there?
Oh, beautiful. I got lost for hours one time just trying to follow this pack of deer. But it’s like, you would get lost. I got kind of nervous, but I was on a hill over a mountain so I knew if you just go down eventually it leads to somewhere. It was stunning. There are turkeys everywhere!

Black Lips have talked about doing a country album on multiple occasions — could you tell more about that and perhaps some of the country artists that have influenced you in life?
We’ve always wanted to do a country record, because our music is based on country and the blues pretty much, but we’ve gotten a lot of songs written and made a lot of demos. After our European tour, we’re going to Berlin and record with our friend King Khan. I’m gonna stay for like a month. We worked with him a lot before — we actually have a record about to come with with him and his daughters. We’re gonna try to record it there and see how it goes.

I like Charlie Feathers. George Jones probably has my favorite voice, and Tammy White, I like those together. I mean, It’s gonna be our version of country. I heard that Ween country album, which is really good, but they’re like a spot-on real country band, but I don’t think we have the ability to do that good or purist, because I think he has session guys. That will be kind of like our version of sloppy, fuzzy country.

This was going to be my last question, but, I can’t help but ask about the WUSSY article (‘Is Jared Swilley of The Black Lips a Neo Nazi’). I want to give you the opportunity to speak more on that.
Generally, in the general political climate we have going on today, I don’t like to comment on anything remotely political at all. Because anything you say gets you in trouble, and that’s kind of the stance I take. I have a pretty eclectic collection of things that I’ve collected all over the world on my wall. From Union and Confederate generals to Persian, Jewish rugs, to hamsas, to strange taxidermy. I have some old Zulu propaganda from apartheid days. I like historical things and weird things — that’s all I will say about that. I think a lot of people take things out of context. Also, when you leave my house, I have a painting of the surrender of Appomattox, which I think is very symbolic, especially being from the South. It was a nasty war that killed a lot of people, that changed things for the good.

I think people under a certain age are incredibly sensitive to things without knowing about what they’re talking about. I think we live in a culture that’s very divided, so therefore I think it’s impossible to really have an honest conversation about anything, an open conversation. I just think we live in a very toxic environment. It would be nice to be able to return to place we could have civil discourse, but at the moment I don’t think we can, so that’s why I choose not to have interviews or take a stand on anything.