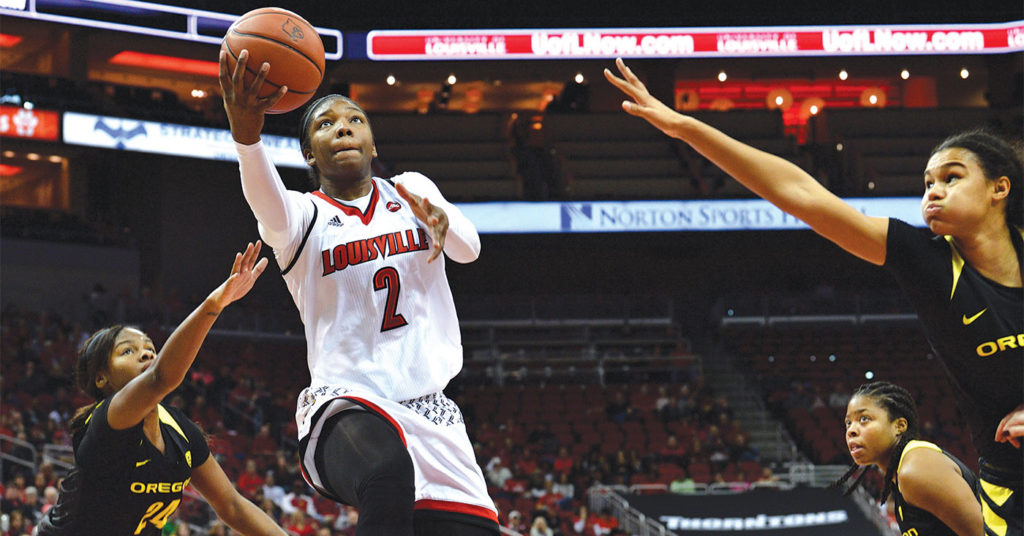 It seems very strange to say that a basketball team that ran off 20 straight wins to start the season has dramatically developed over the season. But that’s exactly what has happened to the 2017-18 edition of the Lady Cardinals.

So it’s interesting to consider those developments as the third-ranked Cardinals, number one seed in the Lexington regional, embark on their journey to the Final Four, a possible National championship, and a banner to fill the newly-available space in the Yum! Center rafters.

Think back to Game 2, an exciting road contest at Ohio State, then ranked 5th nationally. UofL was then 9th. The nip-and-tuck game was a thriller, with the Lady Cards outscoring the Buckeyes 15-10 in overtime to earn the 95-90 upset victory. Some of the performance was predictable; Myisha Hines-Allen turned in the 30th double-double performance of her career. Sam Fuehring tossed in 12.

Asia Durr, in a legendary outing, poured in a university record 47 points, including 13 of the Cards’ 15 overtime total.

On the other hand, Arica Carter, returning from an injury year, only scored three points, with no assists or steals, in 36 minutes. Frosh Dana Evans had one assist and no points or steals in 24 minutes, and Bionca Dunham played only one minute. Louisville’s bench contributed only seven points.

As spectacular as Asia Durr was that day, and most days, it should have been obvious that Cardinals opponents would focus on her, and the team needed to learn to take up the slack when she wasn’t filling the ledger.

Compare that imbalance to the Lady Cards’ first ACC tournament game against Virginia Tech, a game in which Asia Durr shot 3 of 19 from the floor and totaled only 11 points. Hines-Allen scored 21 and hauled in 10 rebounds. Fuehring scored 17 and grabbed six boards. Jazmine Jones tossed in 12 points and snared seven rebounds. Arica Carter had five points, six assists and four steals. Kylee Shook added five points in 12 minutes of action. And all of that was needed in a narrow 73-70 win.

That seems to me to be the most impressive aspect of UoL’s growth this season. The team has learned to win even when their two stars are below average. And they have done that by developing the confidence to step up and make big plays when they are needed. Consider Carter, who threw in three clutch 3-point shots and scored 11 in a close ACC semi-final against NC State, when Asia Durr was held to nine.

Obviously that team characteristic is critical in a one-and-done tournament situation. Throw in a steadily improving Bionca Dunham – who it seemed could never finish close to the basket but has become a physical option on the front line – and head coach Jeff Walz has a team with no weaknesses, a great deal of flexibility, and the confidence that it can beat anyone.

Which brings me to UConn. The perennial champions are loaded once again, and they enter the NCAA tournament as top ranked and the country’s only undefeated team. Any team dreaming of denying the Huskies another national championship sees them as the biggest obstacle. And if you are to overcome that obstacle, you need to have not just the tools, but the belief, that you can hand them a loss.

The UofL Lady Cards definitely have the tools, and they should have not only the belief, but the confidence that they can beat UConn. Because they did, for the last three quarters of their Feb. 12 meeting this year. Trailing 22-4 after a shaky first quarter, UofL outscored UConn by seven over the last 30 minutes, losing by 11, but knowing they could outplay the Huskies, on their home court, and with the winner’s starters in the game until the final buzzer.

Of course, getting to the final game in Columbus, where they would likely meet UConn, will be anything but a cakewalk. After this first weekend at home at the Yum! Center, where the Lady Cards will play Boise State and either Dayton or Marquette, they travel to Lexington, where two tough games await.

Among the teams playing in the opening rounds at Stanford are the home team Cardinal and Missouri, both of which are ranked in the second 10 nationally. And the final game in the Lexington regional is likely to pit Louisville against either Tennessee (ranked 13th), or the nation’s second-ranked Baylor Bears.

It is possible then, that UofL will have to beat teams ranked first, second and fourth to bring home that championship banner. Gulp.

I believe they can do it, but there are numerous red flags. Louisville, like most teams, is subject to long offensive droughts. They are often too careless with the ball. Asia Durr is prone to forcing shots, even though she makes a lot of them. And Louisville’s front line starters, especially Hines-Allen, are a bit foul prone and miss a lot of critical minutes.

But on the asset side of the balance sheet, the Lady Cards’ 32 victories include eight wins against top-25 teams, including a 13-point win against fifth-ranked Oregon. (UConn has 10, Mississippi State has nine, and Baylor has only five, including three against Texas.)

The Louisville women have become excellent at pushing the pace and wearing teams down, especially teams with questionable depth. They are very physical, can lock down defensively, and most importantly, they have been superb at closing out close games. Three tough wins in the ACC tourney, their first conference title in decades, proved they know how to win the close ones. Finally, Jeff Walz, who deserves to be considered the top coach — men’s or women’s — in Kentucky, knows how to get to the Final Four. He has coached this team, and its players individually, superbly. I love their chances. Go Cards! •