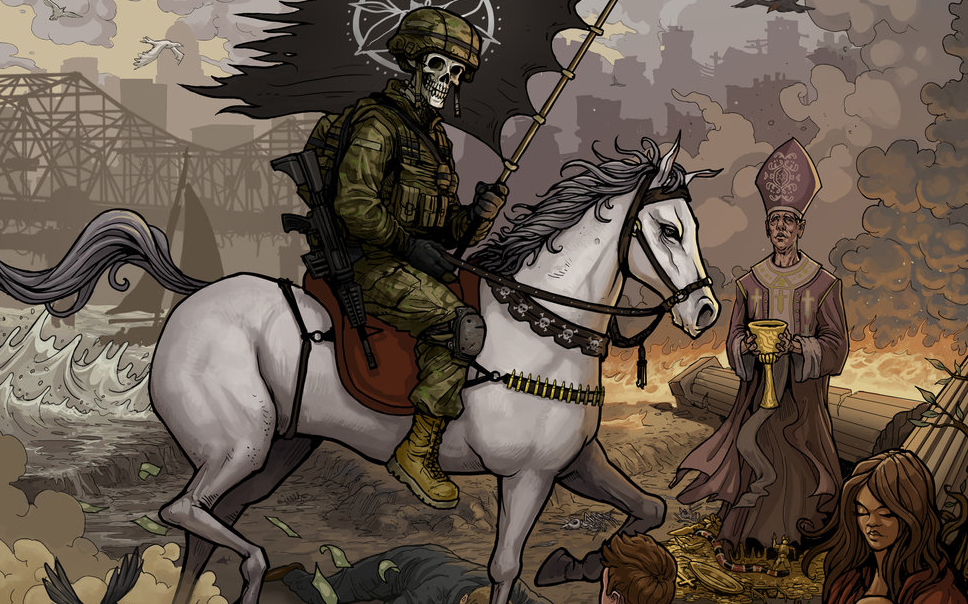 Young Widows — “Rolling as a Forgiver”
Dusting off some older material that’s fallen in the cracks over their now 12-year career, Young Widows has re-emerged with the Western-tinged, “Rolling as a Forgiver.” This offering, a comparatively stripped-down affair, owes a bit more to their side projects such as the austere and mighty Jaye Jayle or the stark beauty of Fool’s Ghost. This is as haunting as it is haunted, like a decayed signal hitting an abandoned radio, bleating out its message in the dark and lonely night.

Touch AC & Dr. Dundiff — “Archetype Abject”
The peanut butter and jelly of Louisville hip-hop are back on their latest project, the ominously titled Death. A rebirth of sorts for Touch AC, “Archetype Abject” digs into an emcee struggling against his grief and anger, while Dr. Dundiff is, as always, the perfect foil, a jazz and funk inflected and imminently danceable beat producer who makes the sun a little brighter with every note. The interplay between emcee and DJ works perfectly, no surprise, but no less welcome.

WunTayk Timmy — “Rest In Peace”
On “Rest In Peace,” the lyrics bounce and weave in and out of clever references, dealing largely with beliefs, while touching on the supernatural. That general narrative theme, of ghosts and dealing with loss, is reflected in an especially dark production. There is a trap-heavy bounce, which benefits from Timmy’s staccato flow, backed by some weirdly eerie vocal and music samples.

Rachel Grimes — “Moving into the Night”
It’s easy to imagine that, given the often slow and methodical key strokes of Grimes’ performance behind the piano, this might be easily reproducible, but that’s the real magic of her playing. Perhaps as much as the notes she plays, it’s the space between them, the unheard ghost figures that invite counter melodies by the accompanying sounds here. What she does so well on “Moving into the Night,” a piece from an upcoming score that she composed, is to create textures ripe with possibility, the perfect reflection for story telling.

Trangression — “Blush of Shame”
Transgression has some fucking rage, and that shit is contagious. There is a pitch-shifting thing going on with the vocals that is just righteous, a demonic choir, from singer to paranormal force of unfiltered and raw power. Backed by the low-tuned guitars and basses, Trangression is putting out intense fury into a world where, let’s face it, sometimes you just need to blast something heavy to help you. Trangression is here for that, a guide through the rotten times.

Tender Mercy — “War”
What started off as an acoustic and piano duo, Tender Mercy, songwriting project for Mark Kramer, changed into a solo project. Where once, the interplay between guitar, piano and voice populated the landscape of his sound, now there is only reverb-soaked guitar and a voice unflinching in the face of breaking. This is incredibly vulnerable music that operates by the rules Kramer imposes and nothing else — the simplest melodies, allowed to breathe and given a pastoral space to grow on their own. “War” has a quiet seethe — not quite angry, but certainly world-weary, a relatable tune for many, regardless of what war it is that you’re fighting.