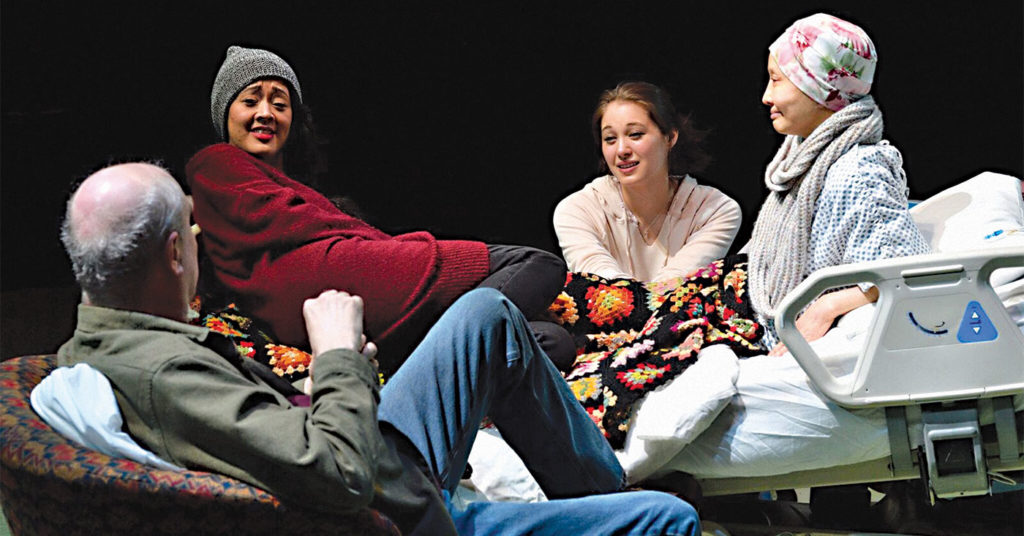 It’s March. For the next several weeks, Louisville will be the epicenter of American theater. At Actors Theatre of Louisville, the Humana Festival of New American Plays offers a half-dozen world premieres.

But that’s not all. In the past, I’ve written that Louisville is the Asheville of American theater. The city’s independent companies are ambitious, innovative and accomplished — and their stages don’t close during the Humana Festival — so LEO will be covering them as well. This week we have three productions to cover.

First up, the Humana Festival opener.

Love speaks in many registers. It laughs. It cries. It roars in anger. It sings in delight. It comforts in tender whispers. It expresses itself in bold claims and in furtive gestures.

But all of those many tones are just dialects of a single language — the language of compassion. And it’s a language that playwright Leah Nanako Winkler wields with wit, force and power in her new play “God Said This,” directed by Morgan Gould.

Winkler, now based in New York City, was raised in Lexington, Kentucky — where the play is set. Except for a short visit, Hiro (Satomi Blair) has lived away — in New York — for 14 years. Now the archetypal urban hipster — who wears her cool, ironic detachment like a shield — has been called home because her mother, Masako (Ako) is in treatment for a deadly cancer. Hiro’s relationships with her born-again sister Sophie (Emma Kikue) and now-in-recovery alcoholic father James (Jay Patterson) have long been broken. And though she still has a friendly relationship with high school friend John (Tom Coiner), even that link is shaped by the ways their lives have diverged.

Those brief character descriptions might sound like set-ups for comic caricatures. But instead a series of vignettes — punctuated by the monologues James delivers at his AA meetings — pulls the audience into the minds and hearts of these characters courtesy of some of the strongest, most heartfelt performances you’ll see anywhere this year.

Winkler’s play is one of those rare works that can whipsaw from gut-busting laughs to heart-rending emotions in an instant. And every element of this production comes together to achieve that goal. Gould and a formidable technical theater team (especially lighting designer Isabella Byrd and sound designer M.L. Dogg) infuse each scene with its own emotional texture — and the nearly invisible segues from instant to instant work like magic. Over the course of a few minutes, the action might shift from a shouting match to a soft, reflective hymn, to a bit of flirty comedy, to a moment of existential fear and then back again.

‘Nobody Bunny in the Golden Age of Animation’

A couple of blocks down Main Street, Eli Keel’s “Nobody Bunny in the Golden Age of Animation” gets its first staging in a “workshop production.”

Don’t let that label bother you. This play will likely change over time — and some of those changes may even be improvements. But it’s not likely to get any more deliciously fun than in this exuberant Theatre [502] production directed by Gil Reyes.

Keel (who also writes for LEO) was inspired by the first golden age of American animated films, the era in the late ‘20s and early ‘30s, just before the moralistic Hays Code went into effect and stunted the creativity of generations of American artists.

I can’t say for sure, but I can speculate the play was loosely inspired by the work of the brilliant Ub Iwerks, who had a fractious relationship with Walt Disney during that period (some of his work is projected before the play opens and you can find examples on the web).

The main (human) characters in the play are Charlie (Maxwell Williams), a troubled animator with a wild imagination; Ray Pilskin (Jake Williams), an exploitative studio mogul with a mysterious hold over Charlie; Jack Palmer (Nick Hulstine), a good-hearted studio owner who is too soft and idealistic for his own good; Doris Billingsley (J. Ariadne Calvano), Jack’s feisty secretary — who will become Charlie’s love interest — a bunch of bunnies whose raunchy sexuality is prominent, but ambiguous (Jon Becraft, Remy Sisk, Gracie Taylor and Angela Williams); plus Sally Sing (Janelle Hunnicut), a mysterious figure from Charlie’s past.

Keel, Reyes and the cast (abetted by great work from technical director Hannah Allgeier and lighting designer Jesse Alford) deliver a breakneck romp of a play. The story revolves around Charlie’s quest for artistic independence and recognition, and Pilskin’s attempt to keep Charlie under his thumb. There is a nourish backstory that could have come from a Dashiell Hammett novel: Just what is it that Pilskin has over Charlie?

One of the wonders of the Keel’s script is that it opens a door not just into the world of early animated film — but into the heart of the creative process itself. Charlie’s trickster characters are steeped in the myths and lore of ancient stories, not just from the First Nations of North America, but from all over the world.

The feel of the play is steeped in its milieu, from the urgent, vintage tones of John Becraft’s 1930s radio voice to the soundtrack — to the wonderful DIY feel of a projected silhouettes on a scrip that scrim that plays a big role in creating a madcap night of verbal wit, sight gags, general wonderment and rabbit ears.

‘Nobody Bunny in the Golden Age of Animation’ by Eli Keel
Through March 11
Baron’s Theater
131 W. Main St.
theatre502.org
Times and prices vary

Anton Chekhov wrote a handful of great plays — and hundreds of great stories. And unlike, say, Kafka, the world of Chekhov’s plays is ultra-normal. People don’t turn into bugs. They rock babies to sleep. They give one another inappropriate gifts. They crave food. And they sneeze.

Polina Shafran, co-artistic director of The Chamber Theatre, has adapted nine Chekhov stories for the stage in a program called “All People Sneeze.”

It’s an ambitious, fascinating project that requires bringing the words of Chekhov’s omniscient narrator to the stage — and no narrator has ever been more omniscient than Chekhov. It’s deftly done here. And Shafran, who also directs, has elicited fine performances from an impressive acting ensemble that includes Carol Dines, Rich Williams, Hannah Connally, Laura Eigelbach and Chris Meier.

These are great stories of marriages gone wrong — a government clerk who becomes obsessed because at the theater he sneezed on the neck of a superior; a conniving mother who plots a romance for her daughter; a hungry pauper whose hunger become fodder for the laughter of the swells who feed her oysters; and more.

If you know the stories — I’d read half of them — seeing them in flesh is a delight. And if you don’t know the stories, this is a good way to introduce yourself to their paradoxical mix of wit and pathos, cynicism and compassion. •