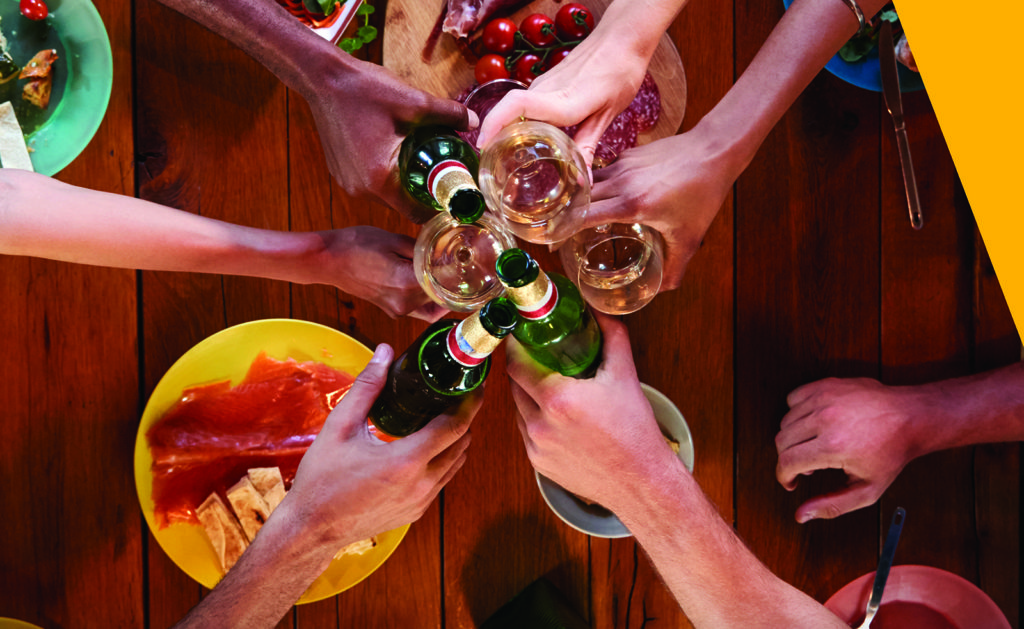 The Humana Festival of New American Plays is in full swing at Actors Theatre, with four of the festival’s six new plays already running in rotation. One of the upcoming plays, “You Across From Me,” is a collaborative project. Each year, ATL brings in four playwrights to create an interconnected collection of short plays, all based on the time we, as humans, spend sitting around tables with friends, family and various other people, and the spectrum of feelings, situations and moods that come with. These plays are set on the Professional Training Company, the group of 20 young actors who have been training and learning at ATL since the fall.

LEO: What’s the process that brought you to this project?

Brian Otaño: There’s an open submission period for the Humana Festival every year, and my agent had submitted my play. And they read it, and they kind of took to my voice in general, and they approached me about coming in and writing pieces from scratch for the apprentice actors.

Dipika Guha: They reached out to me actually, about a year ago now, to be part of this show. And I certainly knew a lot of playwrights who’d done this, been part of this show before, and everyone I knew had amazing things to say. So I was really excited to jump in.

So how did the writing process start?

Jason Gray Platt: Before we even arrived, the director of the piece had sort of tasked the PTC with each putting together a very brief, monologue or performance piece, just two or three minutes that related in whatever ever way they felt inspired by the theme.

Wait, the theme. It’s the table, right? Who came up with that.

Otaño: The theatre gave it to us. I think that we were lucky, because that was a theme we could all speak to. Each of us had a completely different take on what that means and how to approach it.

So you have the theme, people are writing little monologues and stuff, and then?

Otaño: We all met, all flew into Louisville and met with the director for a week of workshops.

Guha: So part of the process, at least early on — it was responding to the works the actors were making. The first pieces we each wrote were in response to work they had made.

Jaclyn Backhaus: The Professional Training Company, they are like a group of young professional actors. They’ve been involved in the entirety of this season, as performers or as stagehands. And they are heavily involved, and I feel like one of the focuses for all of the us, the four writers and the director, was being able to craft an evening that gives everyone a really solid moment to shine. So we were in conversation with the actors.

Platt: Jessica Fisch, the director, had also put together a number of scenarios, and improv scenarios, to work on over the course of the several days, and then on the last day, all the writers brought in some very quick scenes and ideas we had written, just to sort of get a sense of who would probably really intuitively fit with our dialogue style, and also just throw things against the wall and see what stuck. For some people that ended up in some really wonderful scenes that end up coming into the show.

Otaño: Family was one of the most dominant interpretations that came up during the workshop period, especially from the apprentice actors. We ran with it. And then we sort of broke down and looked at the theme, coming to the table, and deconstructed it from a lot of different angles, and thought about tables as architecture, and tables as a place where we watch a hierarchy play out.

Guha: Then we went away and rewrote, and came back. We had a chance to hear each other’s pieces and read them. I think influences from the other playwrights work seeped in a little bit. There was a moment when we were all thinking, how do we serve the pieces and create more of a spine, so I ended up creating what became the framing device of the show, and so did Jason, he’s written like a prologue and an epilogue.

Platt: The way it works, each of us writes four pieces, and two of those go in the show. That is mostly consensus, we come to an agreement on what the best pieces are.

Backhaus: I wrote a play with an item of food that comes to life.

Otaño: I felt strongly compelled to write an intimate piece, about two different families, waiting at a table in a hospice waiting room. Others wrote about — they took the topic and decided to approach everything from feminism to liberal politics. I wrote a longer piece that’s really about tokenism and cultural assumptions in the entertainment industry. We went a million different directions.

Platt: It’s a lot about serving the needs of the show. You want to have a diverse range of styles and moods, and what’s going to make for the best hour and 15 minutes of theater, and then it’s also a lot of logistics involved. You have to get a bunch of people on and off stage really quickly — there are quick changes. There’s a lot of things you have to consider.

Backhaus: The biggest thing I felt when I was watching the PTC was how each component of a well-oiled machine works at all times, so that it felt like they were truly an ensemble that was making sure they were taking care of each other and generous with each other’s ideas. And that kind of work, to be so generous in a room, and to be so egalitarian, it really takes a lot of effort. I’m sure they all are very tired, like completely exhausted, but they are always game for everything, always making sure that each other are, like, hydrated.

Platt: I’m in the middle of a couple of commissioned pieces. One for the Alfred P. Sloan foundation — they commission pieces that are specifically about science and technology. So, I’m writing a play about autonomous vehicles. Particularly the ethical dilemmas autonomous vehicles bring up in terms of when they have to take evasive maneuvers. How do you value saving the life of the driver, saving the life of a pedestrian other people on the side of the road? And the interesting thing is that all of this has to be preprogrammed. These are all going to be algorithms. So, engineers will be making these decisions about human lives.

Backhaus: Next, for me, in the fall I have a show that’s getting its world premiere at Manhattan Theatre Club, and it is also an ensemble show. I think there are, like, 10 people in it, and it’s a play about a woman in a Punjabi community in Wisconsin who is gearing up to leave her town and move away to open a bar. That’s the beginning of the play.

Otaño: I decided that I should give LA a shot, and try my hand at TV, while continuing to work on plays. I have a backlog of ideas I want to explore in theatre.

Guha: I’m going to San Francisco for a week to work with San Francisco Playhouse on a play called ‘In Braunau.’ It’s about an interracial, liberal, American couple who decide to go to Hitler’s birthplace and turn it into a bed and breakfast. It’s a comedy. They are going to reclaim the space, and invite everybody in. So it’s a comedy about white nationalism. Which is where my head’s at. We’re in this moment, and we have to find a way to laugh, as well as reckon.

Do you all come back for the show at some point?

‘You, Across from Me,’ runs from March 23-30. It’s just one of six new plays running at Actors Theatre of Louisville between now and March 31. For a complete schedule, and information on tickets, go to ATL’s website.