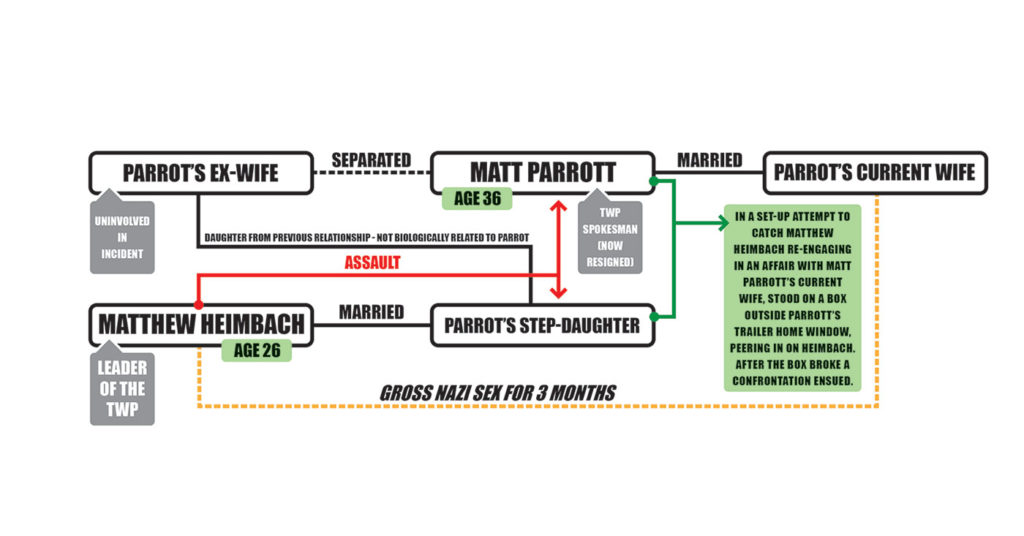 Graphic by @itsadamntragedy for Democratic Socialists of America — Louisville chapter

In a scene from a B-list TV reality show, last Monday white supremacist Matt Parrott and his step-daughter staked out the Indiana trailer home of Parrott’s wife watching for Matthew Heimbach, the leader of the Traditionalist Worker’s Party, a man The Washington Post once dubbed “the next David Duke.” The pair didn’t have alt-right politics on their minds, however; they hoped to catch Heimbach in the act of sleeping with Parrott’s wife, Jessica. (If you are confused, see the chart helpfully provided by the DSA of Louisville).

The trap succeeded as planned, and the young woman (unnamed in news reports, perhaps due to her age) recorded the dirty deed on her smartphone. While she soon grew fearful and left, Parrott climbed on a box to see better — cue the laugh-track — which promptly collapsed alerting Heimbach. Then, Parrott — who in addition to being Heimbach’s stepfather-in-law is his landlord—ordered him off the property, sparking a scuffle.

The younger man Heimbach, 26, allegedly choked Parrott, 36, until he briefly passed out. Recovering, Parrott fled to a nearby house where Heimbach allegedly again choked him into unconsciousness before looking for his wife. He eventually found her and her stepfather seeking sanctuary at the local Wal-Mart. When the police arrived, Heimbach’s wife told them that he had allegedly assaulted her, grabbing her face and causing some bleeding, all in an attempt to get her to say nothing happened.

The police took a statement before taking Heimbach into custody. As the Southern Poverty Law Center (which has designated the TWP as a hate-group) reports, all four of the parties listed their occupation as “White Supremacist,” a job not currently listed on Careerbuilder.com.

In a movement that has made “cuck” its signature insult, TWP spokesman Matt Parrott didn’t appreciate literally being cuckolded by the party’s Dear Leader. The step-father-in-law/landlord was also the TWP’s webmaster and he angrily deleted its website and spiked its internet domain. “I’m done. I’m out,” Parrott told the SPLC the day after the fight. “The SPLC has won.”

With trailer homes, a rural Wal-Mart and an alt-right temptress named Jessica Parrott (don’t blame her, she was drawn that way), the story is so filled with comic possibility that one needs to be reminded that the alleged domestic abuser in the case, Heimbach, pled guilty in July 2017 to assaulting a UofL student at a campaign rally for Donald Trump in 2016, and has been involved in at least two other angry encounters since then — including an alleged racist attack on an interracial couple in a Brentwood, Tennessee pub late last year.

Of course, the SPLC hate-crimes files are filled with cases where hapless, moronic racists pulled themselves together long enough to kill someone. The job qualifications for “White Supremacist” might be sketchy but the potential for violence is a preferred skill.

However, if a bit of in-law incestuousness stepped up the ending of Traditionalist Worker’s Party, the world would be a little better place. Only weeks ago, Heimbach’s fellow white supremacist Richard Spencer complained that meddlesome Antifa kids had taken the “fun” out of neo-Nazi hucksterism and he was thinking of quitting. Heimbach is still on two years’ probation for the Trump rally attack and Jefferson District Court Judge Stephanie Pearce Burke could force him to serve his 90-day suspended sentence if he is convicted in this domestic battery case. Spencer and Heimbach have been two of the more familiar faces of modern neo-Nazism; it would be nice to see less of them.

There is a little historical irony that a Hoosier sex-scandal might finish off the purported heir-apparent to David Duke. A century ago the Indiana Ku Klux Klan was riding high on a combination of racism and anti-Catholic nativism. (Early 20th-century Protestants were convinced that the Pope was trying to rule America from Notre Dame University. Turns out that all he was able to take over was college football.)

With a quarter million members, the Indiana Klan reportedly controlled half of the members of the Indiana legislature in the 1920s. Candidates for both parties sought their endorsement. This all came to a crash when Grand Dragon D.C. Stephenson was convicted in the unspeakably brutal rape and murder of Madge Oberholtzen. Membership plunged to less than 4,000 before the Klan disappeared from the state altogether.

There is much to admire about Indiana — the idyllic campus of Indiana University, the inspiring congressional campaign of Dan Canon and any bar concept conceived by Roger Baylor — but it does have a dark side. From the 1925 tragedy to this trailer-tryst farce, you can see uglier, discordant tones behind the rolling landscape and endless cornfields one sees from I-65. There are creepy, squirmy things hiding under the debris washed up from Ohio floods — and in rural trailer homes.

Speaking of ugly squirming things: Let’s hope that no one releases that tape.