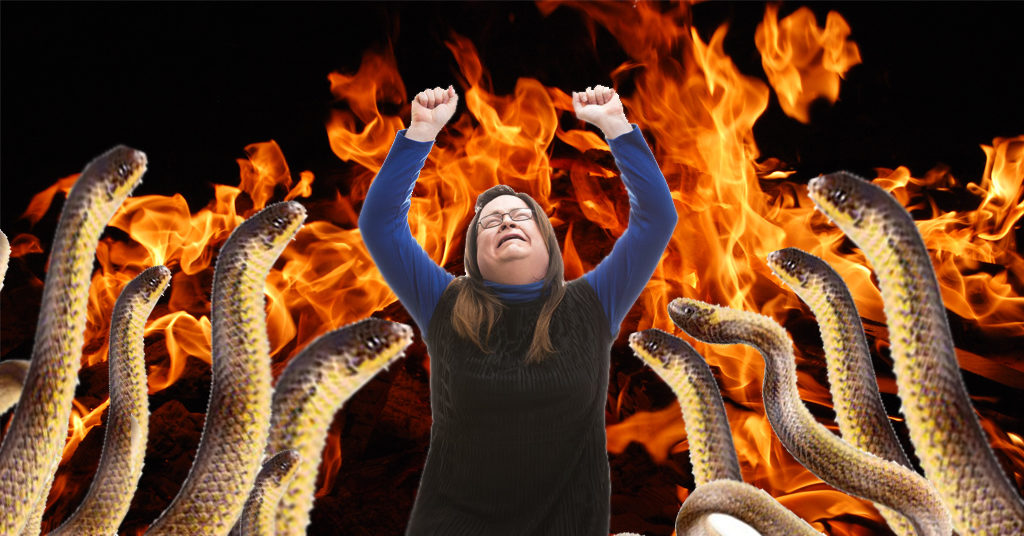 Writing about Rowan County Clerk Kim Davis is a delicate dance for someone who believes in punching up, not down. Yes, she uses her platform to punish and shame gay people, all while playing the victim, but she would have faded into oblivion by now — a sad, superstitious, mediocre oblivion — if she didn’t have Liberty Counsel, Mike Huckabee, Matt Bevin and other intellectually-impoverished but cash-flush men at her back.

As these entities go about promoting her new book, “An Unlikely Candidate” (published by Liberty Counsel along with titles such as “Only One Mommy,” “Same-Sex Marriage: Putting Every Household at Risk” and the expansive “Patriot’s Handbook” series) the rhetoric has veered into the realm of delusion.

And the delusion isn’t harmless.

In a promotional video created by Liberty Counsel, this poem is featured, set to dramatic music and narrated with gravity:

Then they came for the wedding photographer, but I did not speak out because I did not photograph weddings

Then they came for the baker, but I did not speak out because I was not a baker

Then they came for the florist, but I said nothing because I am not a florist

This would be a hilarious satirical piece, but it’s not satire. This is real. We all know the poem from which this is taken (fun fact: Liberty Counsel calls it a “modern-day paraphrase of Martin Niemoller, a German pastor and theologian”).

Not only are evangelical Christians currently under the delusion that they are in a situation akin to the Holocaust, but they believe that they are the Jews in this analogy. Being forced to sell a wedding cake to a gay couple is akin to being murdered for one’s ethnic or religious affiliation. OK.

It’s not just that the analogy doesn’t fit; it’s that the analogy is actively, shockingly, bonkers. Let’s not forget that 5,000 to 15,000 gays were sentenced to concentration camps during the Holocaust.

Not everything is about you, Kim Davis.

Not everything is about you, evangelicals.

Not every encounter with a gay person is a test concocted by God in his laboratory of projects meant to prove your personal faith and strengthen your individual character — and if it were, Kim Davis and her ilk are failing that test, because Jesus would make the fucking cake.

He certainly wouldn’t use his business to pick on people who’ve been picked on their whole lives.

Yet Liberty Council’s rhetoric is one of war (another fun fact: Martin Niemoller was an anti-war activist and pacifist), and it’s all because they can’t bear to see gay people being treated like equals. Anti-war activists identify as “conscientious objectors” — just like Kim Davis, except that instead of refusing to kill another human, her objection is to filing paperwork that moves a gay couple one step closer to a ceremony of love and commitment.

I’ve written before about how aware I am, as someone who grew up in the evangelical church, of how much they long to be persecuted. But 90.7 percent of the current Congress identifies as Christian. It certainly isn’t a secret that Christians are the ruling class in this country, taking the occasional hit from the Constitution, of all things, without really understanding what it means that their desire to impose their religious ideals on everyone is at odds with the document they claim to love.

When the Gideons offer me a Bible, I say, “No thank you.” I don’t need to let them know how much I disapprove of the toll evangelical Christianity takes on the human psyche; how it lifts up the patriarchy and silences the oppressed; how it shames people for normal human sexuality — even heterosexual sexuality — and leads to secrets, self-hate and abuse.

No one has less perspective or can create more trouble than people who are LARPing for the Lord.

Davis’ fellow persecution-fetishist Matt Bevin doesn’t agree, of course. In the promotional video for Davis, he says, “I think Kim Davis is without question an inspiration to leaders like myself, people in the public and those outside the public arena, but to my children to the children of America people even if they disagree with her have got to respect the fact that here is a woman who was willing to put it all on the line out of conviction for what she believed and knew to be her right as an American citizen. And her faith and her conviction in the fact that her faith was protected by the first amendment of our constitution and our bill of rights specifically, is something that she was willing to put front and center and if that’s not admirable, that’s not something we would want all Americans to emulate, I don’t know what is.”

Governor Bevin may not know, but I do.

How about being kind? Jesus spoke about it a little bit. Look it up.