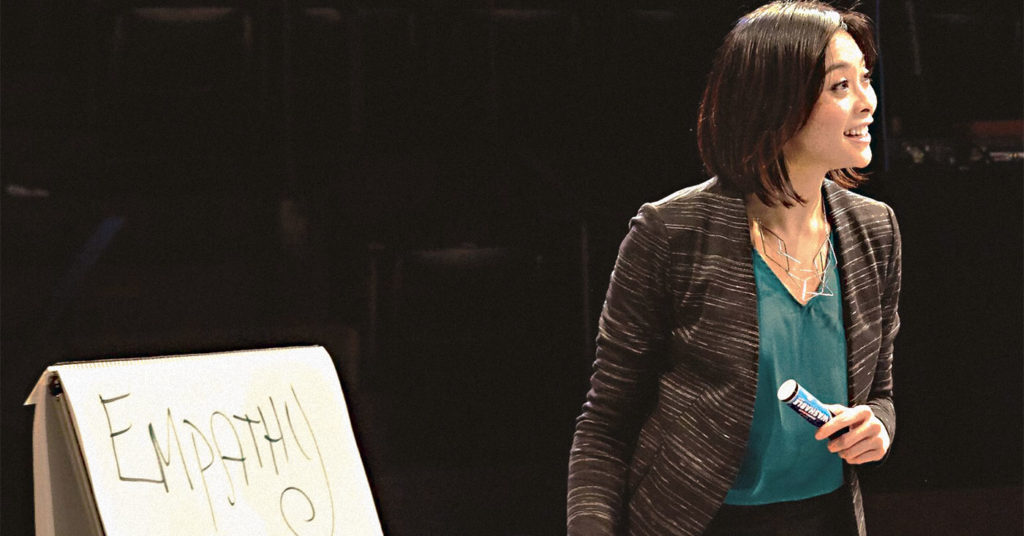 Tiffany Villarin in ‘DO YOU FEEL ANGER’ by Mara Nelson-Greenberg at the 2018 Humana Festival. Photo by Bill Brymer.

The Humana Festival of New American Plays at Actors Theatre of Louisville is off to fast start this season. Three of the six plays on the bill have made their premieres, and by March 23 all the plays will be in repertory until April 8.

This week, the Festival brings us two pieces set in the modern American workplace.

The early scenes of Deborah Stein’s play, “Marginal Loss,” directed by Meredith McDonough, have the mannered feel of a didactic workplace training video. There is a tangible sense that the characters are striving to get things “right” with every gesture and word.

In an actor, that’s called “indicating,” and it’s a cardinal sin.

But these are characters — characters who have suddenly been thrust into an inconceivable situation. It’s not yet 48 hours after the 2001 attacks on the World Trade Center. And they are employees of an investing firm that lost nearly all its employees in the attack. Three of the four are veteran employees. One is a new temp.

These characters are, in fact, autodidacts — because they don’t know what to feel, how to feel or how to show what they feel. They’re trying to find ways to break through a bitter shell of shock. They don’t know how.

And they don’t know how to do the job that they have just now taken on.

The veterans are acquainted — in that superficial workplace way. And they carry with them some common organizational memories.

But all four are now charged with rebuilding and restoring the company’s shattered organizational memory (all those investments that hadn’t yet cleared), while, at the same time, trying to rebuild their own shattered memories and restore some semblance of order in their lives.

Stein doesn’t sentimentalize her characters. These are professional traders. They are more comfortable analyzing bond rates than emotions. Except for the temp, Margaret (Carla Duren), none of them has the kind of real office skills required to get a company back on its feet. Margaret — who says she lost a boyfriend who worked at the firm — claims she’s there to help. And maybe she is.

Allegra Park (Nancy Sun) and John Davies (Ted Koch) are contentious peers struggling with each other — and with survivor guilt. Cathy Lamb (Jessica Wortham) is a commanding power figure who is now the firm’s CEO — solely because on the morning of Sept. 11 she craved a muffin from a downstairs vendor — and went to get it herself, rather than sending an assistant.

In the early scenes, Stein, McDonough and the cast create an unsettling mix of period comedy and uncomfortable concealed pathos. Everyone of a certain age will laugh at the struggles Allegra and John face when dealing with a cranky, dial-up modem. And everyone, regardless of age, will cringe at some early century behaviors that even now seem antiquated.

From that point, new memories surface — and the memory of one of the lost traders looms large as the four survivors grapple with questions that you will likely find yourself thinking about long after leaving the theater. •

“Do You Feel Anger?” by Mara Nelson-Greenberg is a workplace play of a different sort. It does have an official didact. Sofia (Tiffany Villarin) is an empathy coach who has been assigned to teach the staff and management of a collection agency how to feel… empathy.

To be clear about it: This is one of the most outrageously funny plays the Humana Festival has ever presented. That is: It is outrageous. And it is hilarious. Nelson-Greenberg has a free-flowing, uninhibited — and sometimes raunchy — wit that is rare outside the realm of classical Roman or Restoration comedy. There is seemingly no subject she won’t tackle — and no viewpoint she won’t stretch to the very limits of satire to make her point.

Sofia’s own life is a mess (as we learn via voicemails left by her mother, played by Lisa Tejero, who takes on multiple roles here).

And under the fast-paced, insightful direction of Margot Bordelon, this collection agency is a hellishly funny cauldron of dysfunction. Early on, the leader (Dennis William Grimes) reveals to Sofia his top priority. “I really want to pretend that I’m a good guy,” he says. Then he puts on a serious face and continues in a self-important voice: “Isn’t the situation with the homeless terrible? Just awful. They don’t have much food, but they have to eat to survive.”

None of these characters has a conscious sense of irony. They are collectors. Eva (Megan Hill) has a tendency to wear down debtors with four-hour calls during which she relates her own problems. Jordan (Bjorn DuPaty) and Howie (Amir Wachterman) are relentless partners in seduction, who are proud proponents of unreciprocated blow jobs and are obsessed with matters like whether women in an office “sync up their periods” — but often the two of them move with the kind of instant reflexive synchrony shown by goldfish in a tank.

Then there is Eva, the only woman in the firm, who claims that she’s being mugged in the office multiple times a day — “but it’s OK,” she says. Upon first meeting Sofia, Eva advises her not to reveal that she is single — and before long we know why. And we know why Eva has cultivated a bizarre relationship with an Old Man (Jon Huffman) who comes to the office intending to blow it up.

On other Louisville stages:

The American Printing House for the Blind Braille Readers’ Theater:  Moliere’s “The Doctor in Spite of Himself” 7 p.m. Friday and 1 p.m. Saturday. Free registration required: 899-2213 or [email protected]