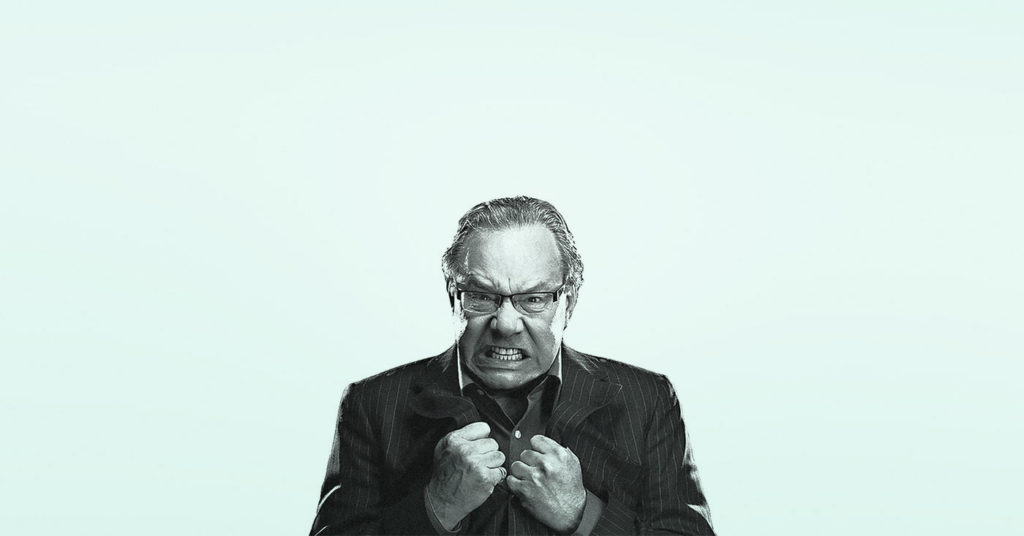 The last time LEO spoke with comedian Lewis Black, he predicted that no way could Donald Trump become president. He concedes he was wrong, attributing the Donald’s win to the political pendulum theory, after Obama’s election. “The reaction to that was, ‘We’re going to elect a black man president and see what happens.’ The reaction to that was, ‘We need a whiter guy.’ We’ll go from that to God knows what, a badger? Let’s elect a honey badger, he clearly doesn’t give a fuck,” Black told LEO in a wide-ranging interview, complete with his signature outrage. Black brings the fury when he takes the stage at The Palace this Saturday night.

LEO: This tour is called “The Joke is on Us.” Exactly which joke is on us?
Lewis Black: The joke on us is that we’ve finally taken the last step to say, ‘We’ve given up expecting any sort of reason or accountability in our leaders.’ As comedians, we used to lead audiences to the joke — now the joke is so obvious we don’t really have shit to do.

For the 2020 presidential race, we’re hearing names such as The Rock, Kanye West and Oprah Winfrey.
Yeah, that’s the level of madness we’ve reached, that that even comes up in public conversation. That’s something you think, then you laugh, and then you keep your mouth shut.

Has America become a full-on reality show?
I think that is the way a lot of people want to do it. But so much has changed, and it’s changing so fast. You go from Me Too to what happened in Florida with the kids. We’re in a different time zone. We’re moving so quickly, now it makes 10 years ago look like we were living in stagecoaches.

Hopefully, some form of sanity comes next, right?
I would imagine. The problem is partly with Congress. The level of disgust I have with them is pathetic. You can have the president do whatever he wants. But if Congress isn’t going to stand-up to him, then what are they there for? Finding dignity in politics is like trying to find something edible in the bottom of a Porta Potty.

Is it possible that Trump might accidentally end up doing a good job?
That would be great. I hope he does. But we’re dealing with someone who is telling us his instincts are spot on — and they’re not. They aren’t. And they might be spot on if I had a sense that he read. He says, ‘We don’t need book learning.’ And we don’t need book learning. But you do need to know geography, or history, or government — there are a lot of things you need to know. He doesn’t know the basics. For a long time we tried to use intelligence as the driving force behind our decision-making. Once we realized that wasn’t working, we thought we’d try stupidity. And that’s not working. All we’ve done is found a new way not to get things done.

Back to the shooting in Parkland, Florida: Young people are rallying for gun control. Will that influence tone-deaf politicians?
What happened is that they woke these kids up and they’re going to pay for it. They really will. These kids have basically turned into adults and are telling grown-ups to grow the fuck up. It feels like a Vietnam moment for them. It’s almost bigger because it’s happening here. And to call it a political discussion is so beyond disgusting. So immature. It’s not a political conversation. It’s a common sense conversation about how you deal with guns in a free society. That’s the question. Everything else is bullshit. We’ve managed a national highway system with people driving 60 miles an hour, right? If we can manage that for our safety, why not guns? Does a speed limit prevent you from going anywhere you want? Of course not. You just might not get there as fast. All anyone is saying is that no one needs to shoot that many rounds that quickly. How many rabbits are you trying to kill, fucker?

Your fan club is called Frustrated Union of Cynical Kindreds United (F.U.C.K.U.). What level of cynicism must be reached before one can apply for a membership card?
Oh, it’s a high level of cynicism, for sure. You really have to step your cynical game up. But if you see what’s happening for the nightmare it is — this is the union you’ve been waiting for.