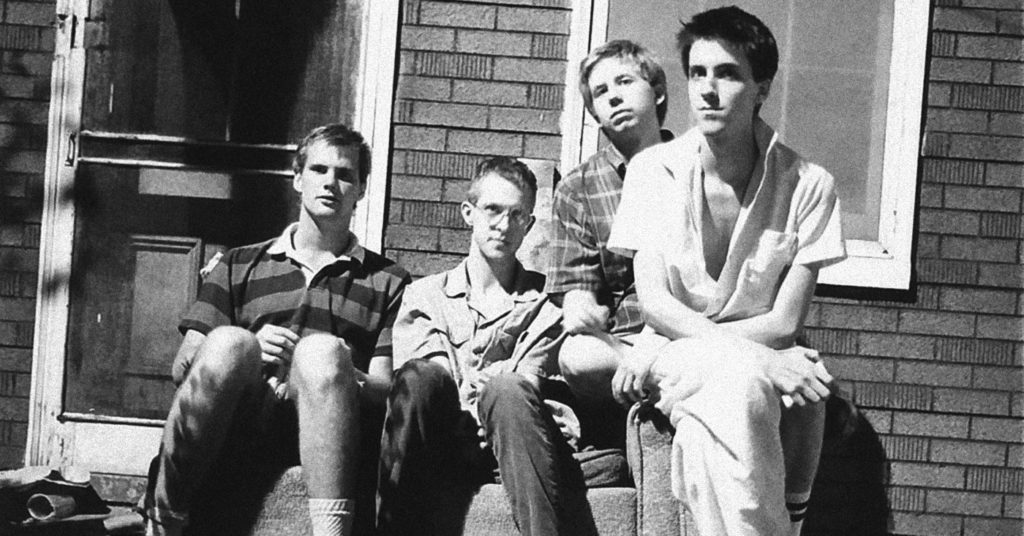 [On March 23, the record label Drag City is set to re-release Your Food’s Poke It With A Stick. The 35-year-old record was pivotal for Louisville punk. Below, Sean Garrison — formerly of the bands Kinghorse, I Have A Knife and Maurice — explains why the record is so important.]

In the early 1980s, the city of Louisville was a very, very different type of place than what you see and experience now. If you wanted a decent cup of coffee, you went to White Castle, the entire riverfront east of I-65 was a massive garbage dump and 99 percent of white dudes under the age of 40 looked like a cross between Tom Selleck and Robert Plant. It was a town that had open antipathy and hostility to anything new, arty, dorky and geeky, and if a Louisville band ever personified that descriptive list, it was the mighty Your Food. If a rock band could have been more expertly designed to horrify and alienate the typical music fan of the time, they probably would have ended up dead.

Angular, snarky, hilarious and openly returning fire against the stupid, fucking, redneck world that made walking down the street with short, spiky hair the equivalent of being trapped in a potentially lethal Atari video game, Your Food created fun-loving ditties built on the bedrock of Tin Pan Alley lyrical gold — songs designed for hot teens engaging in extended, lava-lamp-lit make-out sessions. Just get a load of the pure, unadulterated Americana imagery in their monster hit, “Baby Jesus.”

Trust me, kids — when you played that song at a crowded teen party in Pleasure Ridge Park back in those heady, innocent days of the early 1980s, you not only got the fucking shit punched out of your smirking punk-rock face, but the skags at that party broke your album in pieces and then tried to force the plethora of vinyl shards into your dickhole. Ah, youth!

But play Poke It With A Stick at parties we did, and the results were always spectacular. Now, thanks to the fun-loving assjacks at Drag City Records, come March 23 you too can use the music of the most muscular, sexy and ripped punk rock band in the history of our glorious state to make new friends, cause supermodels of every sex and gender to shamelessly fling themselves at you, to make you invisible to police radar detectors and fill your bank account with millions and millions of Love Bucks, bros.

Of course, when this album was first released, the music of our four young heroes had no such magical powers, but mostly left even the typical punk and new wave listener confused because, well, it just didn’t make any sense and there was no clear way to categorize it — it was arty without really being Arty, it was aggressive without being hardcore, and it was funny without being a joke. Like many, many Louisville bands that were to follow, Your Food was very, very much a product of a place that they both loved and despised, which kept them from being able to take rock and roll seriously, while at the same time giving them just the right amount of alienation to deliver something that is only now getting the recognition it deserves for being so listenable while still being so gloriously and ridiculously fucked up.

Was Your Food ahead of their time? No doubt, son. Did they fit into any type of marketable genre of music when they created this quirky masterpiece? Fuck no. Like many other punk bands of our fair city, they soldiered on just long enough to realize that they were essentially just killing time before they had to finish college or get actual jobs — but we, the unworthy poser masses are left with the aural documentation of their heroic and absolutely futile struggle against their own home and a dark, dismal period where the only decent cup of coffee to be had on Bardstown Road was at the goddamn White Castle.

Now go forth, listener, and poke Baby Jesus with a stick. Thou doth live in Cowtown, and eventually you’ll have to get a real job. But not today, oh comrades — not today. •

Poke It With A Stick will be available on vinyl, CD and by download via Drag City on March 23.

We caught up with Your Food guitarist John Bailey and singer Doug Maxon to talk about the re-release of Poke It With A Stick on March 23.

LEO: For those readers who are either too young or too brain-damaged to clearly remember, give us an idea about how open and encouraging Louisville was to a band like Your Food back then.
Doug Maxon: Where to begin? I just remember playing for the same group of 10 or 12 friends. The only time I didn’t know everyone in the audience was if there was an out-of-town band on the bill, or when we started playing all-ages shows. People took your having chopped hair as a challenge. You navigated down the street, crossing side to side to avoid people who would want to hurt you. Having people yell at you and throw crap from their cars at you was normal. I personally got the shit beaten out of me twice, simply for being that monstrosity known as a ‘punk rock faggot.’ The cops just stalked us — they told us we weren’t allowed to sit out on our side porch at 1069 Bardstown Road.

John Bailey: On a good night seven people would show up at The Beat Club. Sometimes we’d get larger crowds at Tewligans. The punk rock community was tiny back then, and The Beat was the only regular place we could play, and that would be on a week night for beer. I’m talking ’82-’83.

Growing up on FM radio rock, was it surreal to hear your music coming out of stereo speakers?
Bailey: We were more excited than tripped out by hearing the record. I think one of our tests was to ride around and listen to it on a cassette player. There was not a lot of local vinyl at that time, to say the least.

How did the re-issue come about?
Bailey: In late July 2017, David Grubbs and John Corbett held a record spinning event. One of the LPs David brought was Poke It With A Stick. After that, via some online discussions and prompting by David, Drag City decided to reissue it. The original tape and master were long gone so a still shrink-wrapped copy was sent to Drag City and was digitally remastered.

by Scott Recker
When we reached out to record label Drag City for a comment on the rerelease of Your Food’s Poke It With A Stick, we were forwarded to David Grubbs, a Louisville native and Brooklyn College professor, who pitched and facilitated the reissue. Grubbs is a founding member of Squirrel Bait and Bastro and has been involved in numerous other bands (many that worked with Drag City) through the years.

On Poke It With A Stick’s lasting importance.
“It stuck with me because it didn’t sound like — and it still doesn’t sound like — anything else. And, I think that as much as I liked Your Food at the time, I didn’t really fully understand how original what they were doing was. And, it’s one of these albums for me that doesn’t feel the tiniest bit dated. Maybe that sounds like an overstatement, but it really hasn’t dated like a lot of hardcore punk records or first generation punk records did. It was a super eccentric record. It was an outlier then, and it’s still an outlier.”

On how and why the reissue came together.
“Last summer, my friend John Corbett, who’s a writer, published a book called ‘Vinyl Freak,’ which is a collection of his columns for DownBeat of primarily jazz and improvised records that are out of print. The purpose of the column was drawing attention to stuff that really needed to be reissued. When his book came out, he did a reading of it in New York and invited me to come along and pull 10 records that I thought should be reissued. So, the idea was that we would kind of educate and amaze one another. The Your Food record was an easy choice for me to bring. And the morning after doing this talk with John, I cranked it up first thing in the morning, and it sounded so amazing. I contacted Drag City immediately and I said, ‘I think that you really have to do the Your Food record.’ And they were totally gung-ho to do it.”