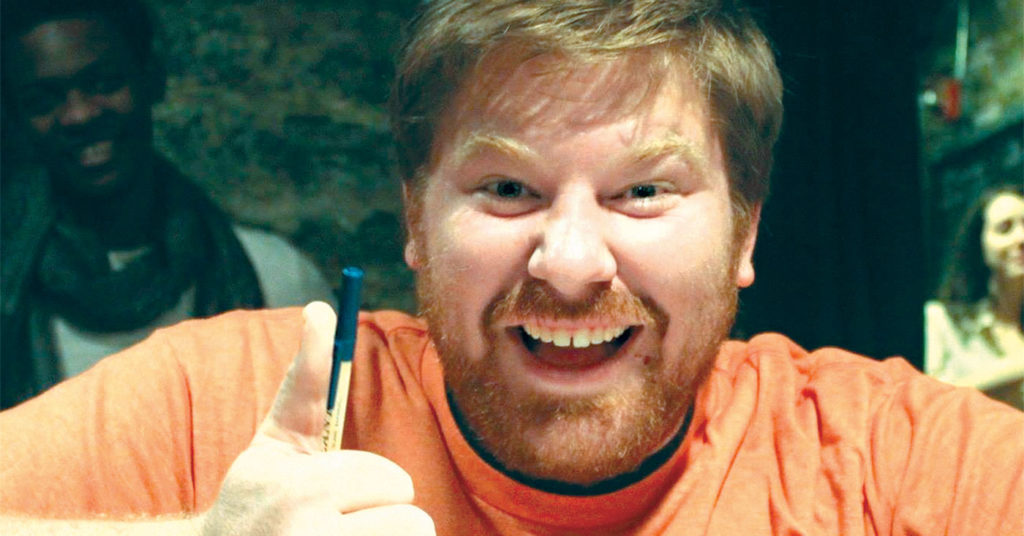 When comedian Mike Cronin composed “The Hipster Song” to make fun of… hipsters, he began to appreciate their qualities. “I love a good cocktail,” said Cronin. “When I see a guy with a curly mustache, lighting an orange peel on fire, I know I’m about to have the best Old Fashioned I’ve ever had.” Cronin will be in town Sunday for one night only when he headlines The Caravan’s post-St. Patrick’s Day show called the St. Vernon’s Day Comedy Party.

LEO: What was growing up in Cincinnati like?
Mike Cronin: I didn’t really love living in Cincinnati. Actually, I hated it. But I had really cool friends and a great school, so it wasn’t terrible. I was the youngest, I have two older brothers. The middle one complains that I was spoiled. Really, my parents were older and just didn’t care anymore. So I got away with a little more. They were just kind of phoning it in for a little bit.

Did you come from a funny home?
My father had really bad anger issues. He still does. He just flips out irrationally over the smallest things. My mother taught us to respond to his outbursts by laughing at him. Hopefully, he’d see how absurd he’s being and wouldn’t do it again. It never seemed to work.

It’s odd that your mother used laughter to counter anger.
Yeah, it’s not a far leap to see how I became a comedian. Also, both of my brothers were three-sport athletes, so I spent a lot of time alone. My parents would be gone to games or meets with their teams, and I pretty much sat at home and watched Comedy Central. I became obsessed with stand-up watching guys like Dave Chappelle, Zach Galifianakis and Dave Attell. I was memorizing the bits and repeating them to other people. Finally, my buddy was like, ‘You know you’ve never said anything original that made someone laugh.’ Now, I have a stand-up career just to spite that guy.

Now that you’re a comic, do you get intimidated watching someone at the top of their game like Chappelle?
A little bit. But on one of those new specials, he did a joke almost word for word that I used to do. It’s on my album, actually. Don’t get me wrong, I don’t think Dave Chappelle stole a joke from me. Dave Chappelle doesn’t need anybody’s help. I just thought it was cool that we thought of the same idea. It was kind of an honor.

You’re a drinker. Louisvillians are drinkers. What’s your funniest drunk story?
Probably my DUI. Trust me, it was dumb — I was stupid. Don’t ever drink and drive. But I got pulled over. I didn’t realize it at the time, but somehow I was driving on three wheels. There were tree branches in my grill. I lost a mirror. Somehow I lost a tire and was just driving on the rim. The cop pulled me over and was like, ‘Do you know why I stopped you?’ I looked at him and said, ‘Honestly, I have no idea.’ I had to pay court costs and the city back for road repairs. I’m the only person who wrecked into the road itself.

Since it’s a St. Patrick’s Day show, what’s the best part of St. Patrick’s Day?
St. Patrick’s Day and New Year’s are the two days when people who don’t drink try to be drinkers. It’s so much fun to sit back and watch them epically fail at that. Someone is five drinks in, and they’re blackout drunk, throwing up on the beads they’re wearing around their neck. I’m three or four in and like, ‘Man, I don’t even feel buzzed.’

You’ve had nearly 1,000,000 views on your video for ‘The Hipster Song.’ What is the best thing about hipsters?
The best is their food. They have amazing food. Oh, and drinks, too. I love a good cocktail. When I see a guy with a curly mustache lighting, an orange peel on fire, I know I’m about to have the best Old Fashioned I’ve ever had.

Would you consider yourself a hipster?
I think it’s funny. When we did that video, and we were showing examples of all the different kinds of hipsters, it seems like it was all just research to show what we were going to wear for the next 10 years. It was like a self-fulfilling prophecy. I only wear flannel and hoodies anymore. That’s the one thing about hipsters — they always look comfortable.