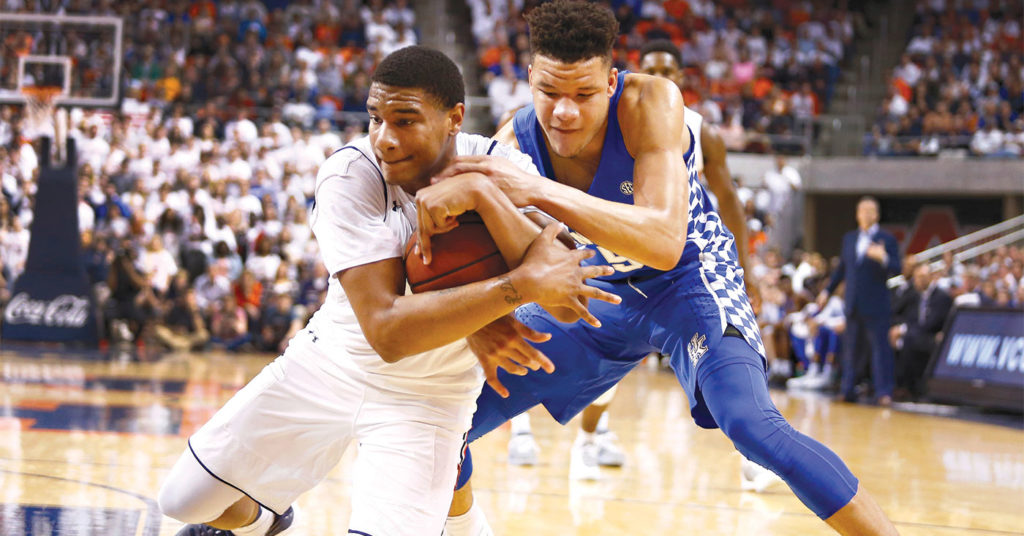 Kevin Knox, as UK falls to Auburn 76-66 at the Auburn Arena on Feb. 14 in Auburn, Alabama. Photo by Quinn Foster I UK Athletics

Kentucky swept the SEC tournament and was rewarded with a five seed, a trip to Idaho and UVA in its path.

So, how will this Kentucky team do in the tournament?

That wasn’t a rhetorical question. I was honestly asking for an answer. Because I have no idea!

I know I’m not the only one who heard that Jarred Vanderbilt was hurt and shrugged, “Well, good-bye to any and all expectations.”

And then the Cats swept through the SEC tourney.

How’d they do it? Another non-rhetorical question. All answers will be gratefully received.

I think they got a number of breaks on the games before them. Playing Georgia and Alabama was probably better than having to play Missouri, Texas A&M or Auburn. But the truth of the postseason is that you have to play the team across the court from you. And Kentucky did.

Which propelled them to a fifth seed, a trip to Boise, Idaho, and the opportunity to face the No. 1-ranked Virginia Cavaliers in the Sweet Sixteen if they advance that far.

It’s not the first time a Calipari team has won the SEC tournament and been seeded lower than the team it just beat. Both those Kentucky teams went to the Final Four.

I know, 60 teams probably complain about their seeds every year. But Calipari has been right about it more often than not. Seven wins in eight games to close out the season, a sweep through the tournament of the conference that produced eight NCAA teams, and Kentucky advanced all the way from a probable fifth seed to an actual fifth seed.

And a trip to a high-altitude corner of the nation that will likely reduce not only the players’ stamina, but also the Big Blue Nation turnout. I’m thinking the Boise airport probably has fewer nonstop flights than Louisville has.

Still, what I said before is the truth: You have to beat the team in front of you. So how many times can Kentucky do that? Until you know whom you’re playing, you first have to assess your own team.

And I just feel this is not a Kentucky team built for the long, deep haul. They just don’t seem to have a dependable take-over-the-game player.

Remember Brandon Knight carrying UK to the Final Four in 2011? And Aaron Harrison in 2014? I don’t see anyone on this team doing that.

Kevin Knox was supposed to be that guy, and he did take over that magical second half against West Virginia. But he vanishes too much. He’s the Man of Many Shots – though sometimes not the smartest selections – but he dribbles off his foot too much, travels on his first step too much, commits lazy fouls too much.

Shai Gilgeous-Alexander is the leader of this team. He’s not the best point guard Calipari has had at Kentucky only because Cal has previously had John Wall, Brandon Knight, Tyler Ulis and De’Aaron Fox. But Gilgeous-Alexander is the goods. He’s crafty, poised and seems to like the dramatic moment. He actually penetrates as well as any of his predecessors and is an outstanding, long-armed finisher – as long as he doesn’t fall in love with the lane and turn the ball over dribbling into the crowd.

Quade Green is probably the best clutch shooter on this team. But he’s usually having to create his own shots, a disadvantage when you’re not the guy with the ball.

The rest of the roster is iffy. PJ Washington is strong on the inside, but he often disappears underneath, or to the bench with foul trouble. Hamidou Diallo has actually become more valuable when he’s not shooting the ball (a fact that’s dimming his and Calipari’s lottery hopes).

Wenyan Gabriel is energetic, but don’t count on him to continue shooting threes as remarkably as he did last week. Sacha Killeya-Jones has improved, and might be Kentucky’s best big man on the court in key moments, as he was against Tennessee.

As for Nick Richards, the time is past to keep saying, “We have to get Nick going.” It’s March. He’s not going anywhere.

And then there’s Jarred Vanderbilt. Amazingly, Kentucky has had a better record without Vando. That does not make them a better team with him in street clothes. He’s the wild card here, an amazing rebounder and the guy who can put the shoulder to opposing big men. But I’m afraid the SEC tournament layoff hurt him, not because of the injury but because of the lost playing time. He was developing his shot and his stamina, and now it feels as if he might have to start all over again.

Any good news in all this? Yes. Unless the NBA scouts see something I’ve missed, I think everyone but Knox and maybe Gilgeous-Alexander will come back (barring transfers). That means a team of seasoned sophomores and juniors – think a typical Tom Izzo team at Michigan State – with not a great freshman class overall, but with some really interesting kids coming in.

But that’s next year. Let’s play this one out, first. And I hope this year’s tournament is a hell of a lot better than that selection show was. Thank God for Charles Barkley. Next year, lose the studio audience. And I love Bono, but is U2 the NCAA house band this year?

And can somebody tell Greg Gumbel that the Auburn coach is Bruce Pearl? He may run dirty programs wherever he goes, but his team won 25 games. He at least deserves to get his name right on national television, before the NCAA indicts his ass.

They’ll get his name right.