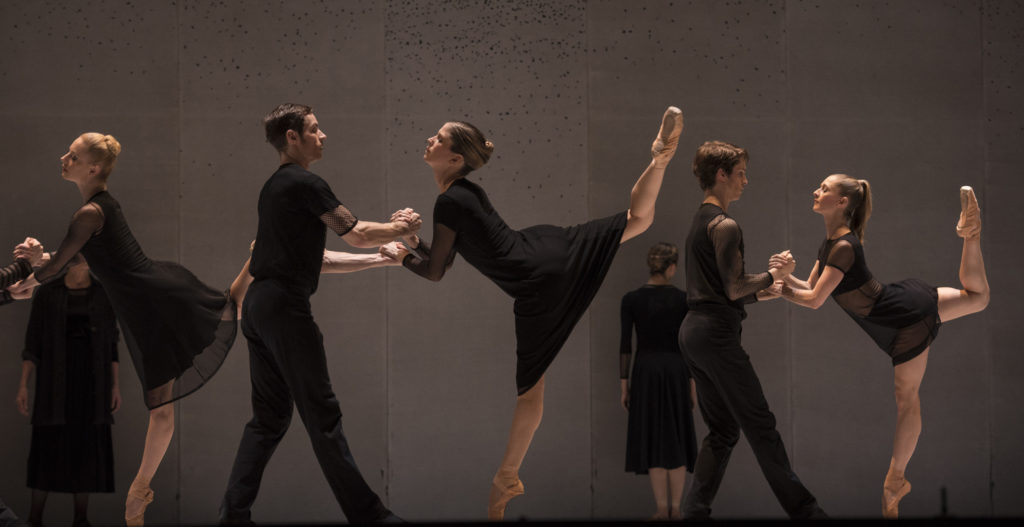 A double-feature the Louisville Ballet offered with French classical music, as part of its evening of works “The Beyond,” suggests earthy turmoil is likely to follow your spirit no matter where it passes onto after leaving this world.

The titles “Requiem” and “Project Faust” are very different pieces, with the former squarely rooted in dance that displays the rigor of these dancers. The latter, however, marks a new kind of work for this ballet company.

“Project Faust,” a world premiere created with choreographer Adam Hougland and the Kentucky Opera, is the vision of director Sally Blackwood that the company embarked upon more than two years ago.

At the center of the performance are the voices of tenor Garret Sorenson as Faust and soprano Emily Albrink as Marguerite in what is recut version of Charles Gounod’s opera “Faust,” which plays out on a dimly-lit cavernous stage lined by silver scaffolding. As Faust, Sorenson stalks Albrink’s cautious Marguerite while company dancers move about them.

At times, dancers slither on the floor or take to climbing on the scaffolding. Then, they grasp and pull on bungee chords attached to those same set pieces. The dancers even work with the singers to have them enmeshed in the ropes like webs or swings, evoking a somewhat Cirque-du-Soleil quality. It looks complicated.(On opening night, something went awry in the early part of the performance forcing the curtain down and the house lights up momentarily.)

Dancers move nearly nonstop on stage, much like movement found in some of Hougland’s other dark works, including “Rite of Spring” that the company premiered in 2008 with Wendy Whelan.

The performance achieves luminous moments with Sorenson’s and Albrink’s singing. Bass Jorgeandrés Camargo sings the part of Méphistophélès offstage in the shadows, and sometimes that character’s ominous shadow is cast onto the stage. The dramatic presence of Maya O’Dell, a young girl, accompanies Albrink most of the time reflecting a younger version of Marguerite or her lost daughter, having a precious affect.

By the end, the story has traveled well-worn territory, and the piece has shown dancers’ stamina without really spotlighting the company’s talents, given that the set and lighting often obscure them.

Much like the traditional opera, Faust is still pursuing Marguerite, but here she rejects him and finds her power instead of becoming the ruined women of the original 19th-century story. It is a ripe story for marketing in #MeToo times, but lacks more profound offerings.

As the Louisville Ballet’s Artistic and Executive Director Robert Curran assembled “The Beyond” with talents such as Blackwood of Australia, he also reached to fellow compatriot Stephen Baynes to make the first half of the program with “Requiem” to Gabriel Faurés music. Curran danced in the piece when Baynes conceived it in 2001 when both were working with The Australian Ballet, where Baynes also danced and spent years as the resident choreographer.

In “Requiem,” dancers dressed in black perform in a confined box-like structure with pointillist designs on scrim walls that are sometimes illuminated from behind and can be translucent. Often moving among the dancers is an older woman (Jeannde Ford), a harbinger of the future as they go through quotidian movements in vignettes — a building of relationships, clustering of groups and life in solo. There is frustration, rushes to the walls and clustering near them.

Beyond the walls is the chorus with solo singers soprano Emily Albrink and baritone Chad Sloan from Kentucky Opera, who provide lush vocals and can sometimes be seen behind the scrim.

While movement goes around Ford, the dancers never dismiss her suggesting a respect for age. That connection to other people extends to having a lot of partnering throughout the piece — and it is gorgeous as bodies swirl onstage. Perhaps, this is a way to forget their entrapment.

A highlight of Baynes’ partnering comes in a duet between Erica De La O and Mark Krieger where he holds her and scoops her body in circular, continuous but unhurried motion before leading her into other steps all so elegantly.

There also is a dramatic solo by Leigh Anne Albrechta when a light from above shone down on her blond hair expanding to illuminate her. The effect is mesmerizing and calls on her to follow up that dramatic moment with equal intensity in her own performance. She rose to the occasion.

The Louisville Orchestra under Tara Simoncic’s baton had a lot to work with — given the music they played were leading dancers and vocalists the entire evening.

Louisville Ballet will present “The Beyond” at 2 p.m. on Sunday, March. 2 at the Kentucky Center’s Whitney Hall, 501 W. Main St.  More information: 800-775-7777; louisvilleballet.org and kentuckycenter.org.