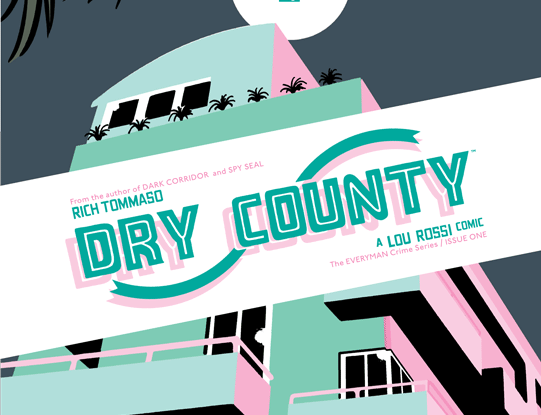 If Rich Tomasso is going to take a break from a book as amazing as “Spy Seal” to work on something else, that something else better be pretty freaking good. Fortunately, “Dry County” No. 1 (which he writes, draws, colors and letters himself) is more than worthy.

“Dry County” takes place in the neon-colored world of late ‘80’s Miami and centers around newspaper cartoonist Lou Rossi. Your typical noir protagonist, Lou seems to have plenty of flaws and self-destructive tendencies. A chance meeting with a gorgeous girl in the laundry room brightens his outlook on life, but what if that was actually the last thing he needed? Described right on the cover as “the everyman crime series,” the book definitely doesn’t start out as one. It reads more like a typical autobiographical story you might see from a Daniel Clowes type before fully embracing its crime noir elements by the end of the book.

There are no weak spots in Tomasso’s art: His thick linework is top notch, falling somewhere in the middle of comic books and cartooning; and he cleanly captures the art deco style and pastel color palette of a vintage ‘80s Miami.

By the end of the issue, I, like Lou, was too drawn into this world to back out. Issue No. 2 comes out April 11, and the stage is certainly being set for interesting things to come.

“Get Out” was my favorite movie of last year for many reasons, but a big one was because of how real it felt. In the horror genre, if you don’t buy into what’s going on, the moment when the tension is released won’t be scary. “Infidel,” a new series from Image, is a horror book in which it’s almost too easy to buy into the premise.

Aisha has recently moved into an apartment in New York City with her husband, stepdaughter and mother-in-law. She begins to get more and more creeped out by strange goings-on in the apartment, and you get the vibe that the building has a dark past. The “Get Out” feel largely comes from her mother-in-law, who has a history of not being happy about her son marrying a Muslim woman, but Aisha refuses to believe she doesn’t have good intentions.

This is the debut comic from writer Pornsak Pichetshote, but he worked under Karen Berger as an editor for Vertigo Comics, so he has a lot of experience with this type of storytelling. I wasn’t familiar with Aaron Campbell’s art until this comic: These are some of the scariest panels I’ve seen in a comic. “Infidel” No. 2 comes out April 18, and if it’s anything like the movie I’ve been comparing it to, I can’t wait to see what twists it throws at us.