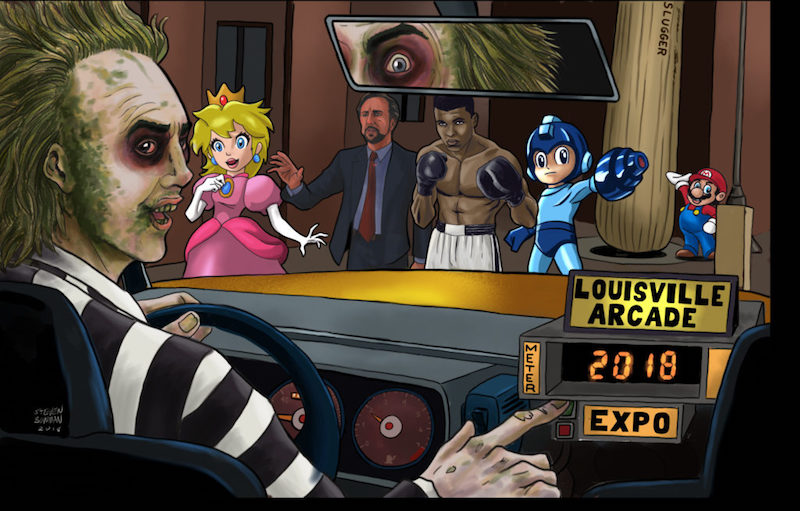 It would be easy to pessimistically speculate that the Louisville Arcade Expo was put on by some faceless company looking to make a quick buck, but that couldn’t be further from the truth. Three local, independent co-founders  — Joe Stith and brothers Matt and Jeremy Fleitz — started the expo seven years ago to recapture the nostalgic feel of an ‘80s arcade. In 2018, it’s a gamer’s wonderland. Last week, on a rainy Wednesday at Zanzabar, where a new pinball machine, Dialed In, was being unveiled, the co-founders were sitting in a booth, excitably telling me stories of the rare pinball machines, home consoles and arcade cabinets that will be at this year’s event.

“One of the rarest games in the world, my brother owns, which he doesn’t toot his own horn, but he’s bringing it to the show this year,” Matt Fleitz said. “It’s a Mike Bossy pinball machine. Mike Bossy was a famous hockey player. They made this game in the ‘80s, took it to a show, and then it was dismantled — gone. It was never made. He collected all the parts, put it back together himself, and wrote the code — he’s a software developer. He’s doing a seminar on it. This game will be at the show this year. One of one. His game, that’s it.”

And then there’s the Rat Race machine, which is a two-player table-top style game where you use a joystick to guide a pinball through mazes to acquire points. There are only ten floating around the world. Or the BS Satellaview, a Japanese system with a Zelda game not often seen in the States. Those are only the tip of the iceberg. But, while those three examples represent deep dives into gaming history, it’s just as easy to find something much more familiar during the three-day Louisville Arcade Expo at the Triple Crown Pavilion (March 2-4). You can walk up to a Nintendo 64 and race in Mario Kart. Or sit down at a Telstar and play pong. Or wander through the dozens and dozens of pinball machines and arcade cabinets on the floor, all set to free play, stopping at Pacman, Mario Bros, Dig Dig and a bunch of other familiar titles. Add in seminars, vendors, tournaments, live music and a bar, and it loses the vibe of a convention, and feels like someone rented a giant forgotten arcade from the ‘80s and threw a party.

The Louisville Arcade Expo debuted in 2011. That first year, they scrapped to get around 30 games, and didn’t expect much, but they were able to pull it together and the turnout was a surprise.

“We had no idea what we were getting into,” Jeremey Fleitz said. “It was the first show we had ever done. We didn’t sleep for at least 36 hours beforehand. We were going around, picking up games. We’re begging people: ‘If you have an arcade machine in your basement, we’ll come over and pick it up.’”

“We thought no one’s going to show up to this thing, it’s just going to be an awesome party,” Matt Fleitz added. “As soon as we opened, there was a line out the door, with so many people — it was packed.”

From there, it organically grew. Each year, more machines found their way to the Expo. The radius from where the collectors were bringing them widened. The three organizers made friends at other conventions, and located people that could help breathe new life in the Expo. Every year, there has been less vendor space, so they can make room for more games, and they attribute that to not trying to make it an over-the-top sort of event.

“There are collectors everywhere that are brining their machines to Louisville,” Jeremy Fleitz said. “And it’s one of those questions like, ’Why would they want to bring them to Louisville?’ But it’s kind of like a best-kept-secret type expo, where we don’t go out there and advertise, you know like, ‘Hey. Sunday. Sunday. Sunday. The Arcade Expo is coming around.’ We don’t advertise at all. Everybody knows it’s going to be the first weekend in March. And just come down here and have a good time. We’ll help you unload your games, give you free admission. Because of that, we’re always packed.”

The Louisville Arcade Expo run from Friday-Sunday, March 2-4 at the Triple Crown Pavilion, 1776 Plantside Drive. For a complete list of games, times, prices  and a schedule of events, visit arcaderx.com. Day passes are $25 in advance for Friday and Saturday; $20 on Sunday. Add $5 for the door price.