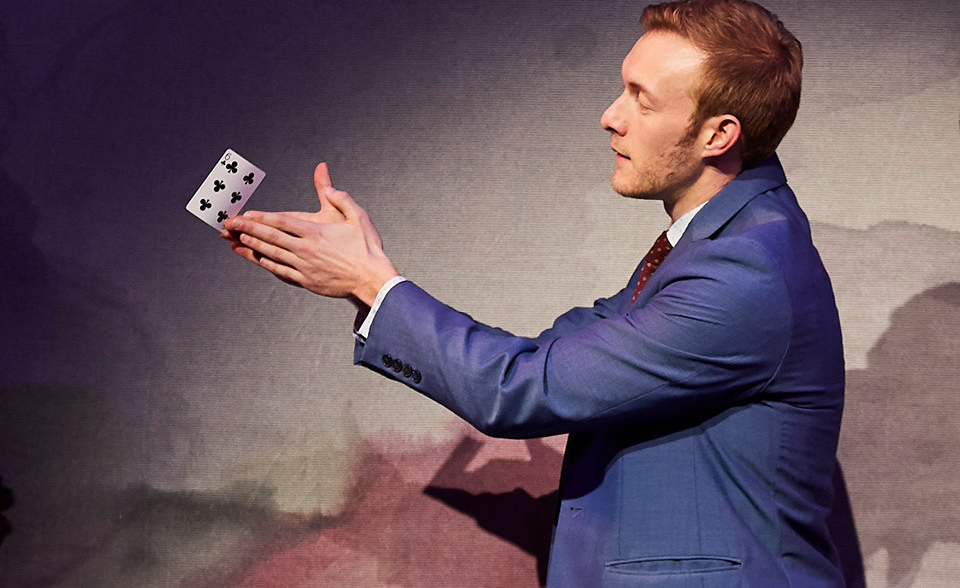 Brett Schneider in ‘The Magic Play.’ (Photo by Bill Brymer)

Currently playing at Actors Theatre, ‘The Magic Play’ is a meta exploration of magic and interpersonal drama. It starts out as an impressive, but straightforward magic show, until the magician’s emotions and personal life begin to interrupt. Actor and magician Brett Schneider, who plays the central character, spoke with LEO about how he learned magic, how he got into theater, how he merged the two and getting asked by NBA players for an invite to The Magic Castle.

What was the spark? What was the draw?
Well, actually, even before that I was always a little interested in magic, simply as a way of figuring out puzzles. I remember when I was even younger I had a book of optical illusions. But it wasn’t until I was about 10 that I got a book called ‘Mark Wilson’s Complete Course in Magic,’ which is a big, hardcover book that really has a huge compendium of anything from really basic tricks with found objects to big on-stage illusions. So it keeps you busy.

What led you to theater, was that a separate thing?
I was doing theater in school, and doing all the performance groups I could get my hands on. And, as I was going through high school, I was also gigging as a magician. So I was doing as much as I could, but they were pretty separate at that time.

So they stayed separate for you?
Well, the two practices, theater and magic, inform each other. So, when I was improving one, I was improving the other. When you’re just starting out in magic, when you go buy a magic trick, it comes with patter. With a script for the trick. So you are given what to say, and usually you don’t know any better than to regurgitate what you read. It’s an elementary way of introducing a script: This is what you do and say at this point, then you do this with the object, and then you say this. So, it’s a way of practicing telling a story, and then doing theater is another way of telling a story.

So what does your working life consist of?
By trade, I’m an actor, so I’ve been a professional actor for about 10 years now. I also work as a magician. When people ask me, ‘Are you an actor or a magician?’ I say, ‘Yes.’ For me, it’s all theater. In terms of the business, there are two sides. Gigging as magician is pretty separate than working as an actor. In terms of magic, I’ve been a performing member of the Magic Castle in Los Angeles, and then I also work with the Chicago Magic Lounge. I came up as an artist in Chicago. So, [I] spent my 20s in Chicago, doing all the acting I could get my hands on, and still gigging as a magician. Then I also started designing illusions for theater, which is how it started to overlap.

I love the whole secret vibe of The Magic Castle, and tracking down someone who can get you in is kind of fun.
It’s so funny — I’m in and out of LA for work all the time, and it’s always amazing to me to discover that even if you’re pretty high up in the industry, it’s still equally hard to find an invite to the castle. So, I’ve personally had celebrities or NBA players be like, ‘Hey, can you get me into the Castle?’

So let’s jump to the development of ‘The Magic Play.’ You were involved in it from pretty much the beginning. Can you talk about that?
The playwright and I knew each other in Chicago — in the theater world first, before we started working on this. And then he had an idea for a character who was a magician, for his next play. A mutual friend of ours told him I practiced magic. We really just sat down for coffee and started talking about the magic world and the types of people who are attracted to it. Because ‘The Magic Play’ is really about this character, and manipulation and control, and how you relate to people if you are very good at controlling people, or controlling a situation.

Have you been involved in a lot of new play processes where you got to be on stage once it was finished?
I have been fortunate to work on a handful of new plays. Chicago is such a hotbed of theater that there is a lot of new work and playwrights that are premiering their scripts out there. I haven’t been as intensely involved in the origin production of a play, as much as I have with ‘The Magic Play.’ So, it’s been quite a journey. I’ve always played the magician, I always did the latest draft, [playwright Andrew Hinderaker] would throw new pages at me and I’ll figure them out.

So he’s writing magic tricks in?
Well, two things happen simultaneously. He was just writing effects. So, in the script, it would say the magician does this, that and the other thing, but he would have no idea how I would do that. So, I’d have to engineer the trick, and then put his words to it. And the difference between this play, and the patter you get with a magic trick, is that this is a meta script. It’s not just the words you say with a trick, this was the words the character is saying as he’s performing a magic show, and as he was having realizations onstage. So, it has this other layer of theatricality and narrative that magic doesn’t normally have.

So there’s an emotional journey. What is it like trying to honestly experience that emotional journey, while also using, what I must assume, is a rigid discipline of how to make these tricks work?
It is quite a challenge, both as an actor and a magician. The play is incredibly challenging. As an actor, you’re trying to get out of your head and remain as present as possible and go on that emotional journey, and as a magician you are thinking three steps, or 10 steps, or 100 steps ahead, and always trying to control and anticipate what happens next. And on the surface, those two seem diametrically opposed, and in some ways they are, but they are also similar challenges. Yeah, it’s really hard, but in a  certain way, whenever you make a piece of theater, you also have technique you’re trying to get away from. You know where you’re gonna stand, what you’re gonna say, and you have this craft you’re trying to let go of and instill it with life, and spontaneity and presence. So in that way, the two are very similar.

Before I ask my last question, can you say the name of that book again? I’d love to learn some magic.
Sure. It’s Mark Wilson’s ‘Complete Course in Magic.’ That’s a classic, and certainly a good place to start — it’s so comprehensive, it has so much. In terms of sleight of hand, I’d also recommend ‘Now You See It: Lessons in Sleight of Hand.’ I always say learn from books. It’s the old-school way, but it’s the best way.

OK, last question: You’ve designed illusions for other shows, and so many plays now have moments or stage directions in the script like, ‘she disappears,’ or ‘she sprouts wings and flies away.’ How often do you get called in? And what’s that process?
I’ve had so much fun working as a magic consultant or illusion designer, even when I’m just on production team. It’s a lovely challenge to read a script that has stuff like that, and then figure out: ‘OK, is this moment truly asking for an illusion, or is this a magical realism moment, or is this represented by something else entirely?’ ‘What serves the story the best?’ Those problems have been really fun.

Catch ‘The Magic Play’ at Actors Theatre until Feb. 11. Get tickets online at actorstheater.org.