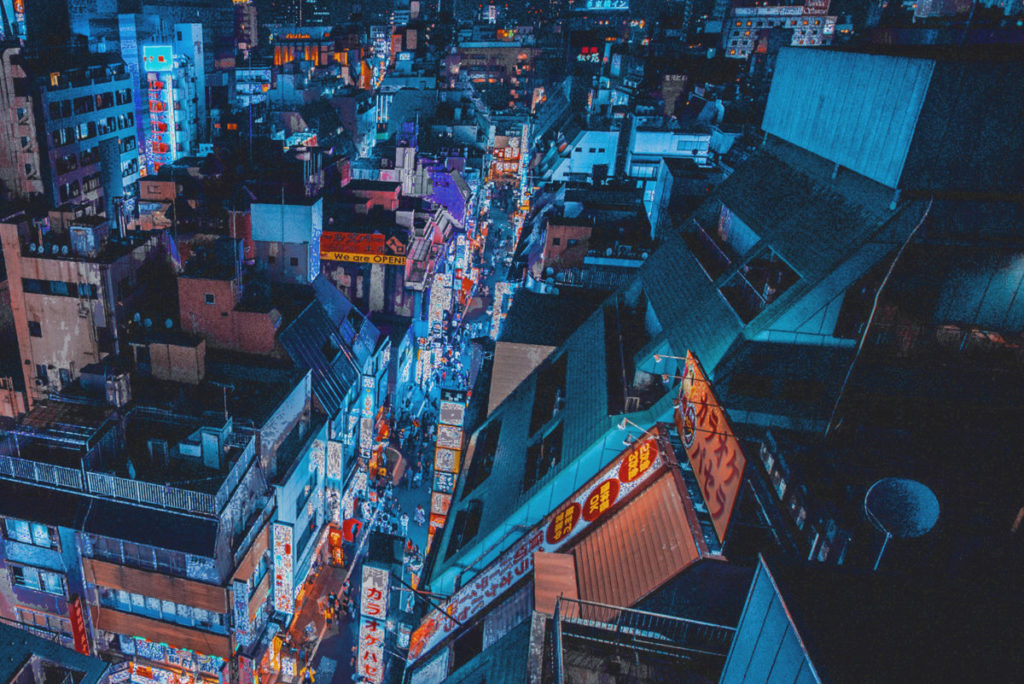 Vyva Melinkolyaky — “Soft Red Lights”
On “Soft Red Lights,” Vyva Melinkolyaky paints a picture, both musically and lyrically, with the lead single from her newest release, a self-titled album loaded with dreamy, shoegaze-leaning pop — waves of blissed-out guitar and reverb-drenched vocals floating gently. In this love song there is an unmitigated joy in Melinkolyaky’s desire, backed with a confident song structure. This is all longing, the kind that we’ve all felt at one point or another, the sort of love that haunts your yesterdays and promises your tomorrows. Part Velvet Underground, part early-Radiohead, Melinkolyaky has a calming and playful take on pop, awash in a sea of effects.

Horizontale — “Raid”
Although the accompanying text will tell you as much, there is no mistaking the Vangelis vibe on “Raid” by Horizontale. A “Blade Runner”-esque exercise in keyboard driven neo-futurism, there is a brooding, contemplative darkness imbued in the music, punctuated by rising synths, orchestral in nature. More than just engendering an image, Horizontale takes you to a dystopian future, one bleak and beaten, a coal-soaked sky blotting out the sun, the environment left to waste. Here, humans are commodity, bought and sold with no real value other than aesthetics. Such is the work of Horizontale, transportative and, despite the accompanying melancholia, somehow gentle and sincere.

Soft Self Portraits — “Deep Dream Companion”
The newly renovated lineup of Soft Self Portraits has debuted on Kirigami, the auralgamiSOUNDS comp released to celebrate their three year anniversary. Now fleshed out with a live drummer on an acoustic kit, the duo has a full sound that features guitar and keys, alongside singer Cody Johnson’s dreamy voice. There is an airiness to this track that evokes feelings of lightness and sincerity, an earnestness that puts you at ease. Johnson has a knack for setting a mood and does so with aplomb here, using the deftness that he has developed over time as a musician to inform the overall composition, filled out now with the addition of his bandmate. You can picture Soft Self Portraits on a bill with Washed Out or The Xx, although Johnson and company make that sort of sound their own distinct flavor.

iNTELLi-G — “MONOLiTH”
As the proud owner of a playlist entitled “Skynet Jams,” I can tell you that iNTELLiG would fit right in. The beats are monolithic, clocking in at a tight lockstep, intercut with marching band drums and the sort of sub-bass that immediately scares middle-aged people in the suburbs about youth culture. As such, there is a mechanical nature to the music that recalls a factory, albeit an especially live one, automated to get down, but probably also to build robots bent on the termination of humanity or something. This is the music that the robots play dominos to, celebrating their final victory over the pestilence that is humankind.

Mmuso — “On the Rocks”
A rumination on long term commitment without the accoutrements that come with love tracks, Mmuso is on the same page as David Byrne was in “Once in a Lifetime,” wondering how he got where he was, and if this is it. There is a studied consideration on finding that balance between maintaining your own interests and getting lost in your relationship, especially when the idea of parenthood is entered in the equation. Likewise, Mmuso doesn’t beat around the bush on the reality that physical beauty is a fleeting moment in time, the passage of such eroding your apprehension, with all parties letting their hair down. We’re not all pretty, we’re not all perfect, but should we settle? Is settling even possible, since we all live our lives in continued evolution with one another? Mmuso is here for that.

Breaker 1-9 — “90’s Kid”
An unexpected addition to the Louisville indie canon came recently in the form of Breaker 1-9, a side project by Evergreen guitarist and songwriter, Tim Ruth. Ruth has been out of the spotlight for years now, but his legacy has remained a vital and energetic cornerstone of the punk and indie community. Recorded in the mid-‘90s, the aptly-titled “90’s Kid,” has a Pavement slacker guitar feel, backed with the vocals of Paul and Amber Oldham, who dusted off these demos, updating them some twenty years later. There is a jangling weirdness to Ruth’s guitar playing that strangely enough prefigures the garage rock-tinged, riff-heavy self-titled Evergreen record. The compositions are thoughtful, relying in turn on that same general guitar forward vibe.