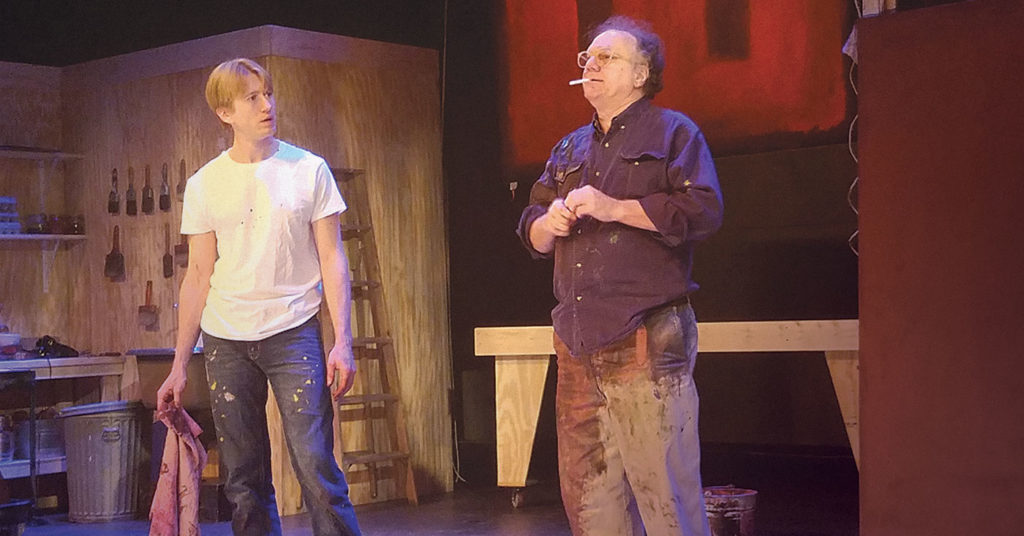 At the beginning of John Logan’s 2009 play “Red,” a young man enters the studio of Mark Rothko. It’s clear from his diffident manner and formal dress that he’s a supplicant, a candidate for a position.

And what happens next is perhaps the most riveting job interview in the history of drama. Rothko faces the audience, gazing intently at a painting that hangs on an imaginary wall that stands where we sit. And he asks the candidate, “What do you see?”

From that moment on, the candidate and the audience are caught up in a ferocious debate about art that plays out in the context of a monumental act of creation — and an extraordinary artistic struggle. Rothko had recently accepted a rich commission to paint murals destined for the walls of the Four Seasons restaurant in New York’s Seagram’s Building — a project that would take years, and challenge Rothko’s notions of artistic integrity.

The play brings the audience directly into that episode and into the studio where Rothko (J. Barrett Cooper) and his assistant Ken (Brandon Meeks) argue, debate and work.

But this is not academic banter. For Rothko, it’s a life-and-death struggle to uncover the significance of life itself via the actual work of making art.

And work they do. The stage is opened up for this production to create a warehouse-like studio space. The studio is populated with large reproductions of Rothko works (painted by Petersen Thomas). And the spattered studio is equipped with the tools of a working artist — including a set of pulleys capable of hoisting a monumental canvas into working position.

In one amazing sequence, Rothko — played with dark grandeur in Cooper’s magnificent performance — mixes paint while he talks about Pollock’s death and the tragic nature of art. Meanwhile, Ken stretches a canvas. The two work together to hang the canvas. Rothko pauses to put an LP on his turntable. And then, as the “Kyrie Eleison” from Mozart’s Requiem Mass throbs and pulses, they raise their wide brushes and attack the canvas like warriors in frenzied battle, priming it in a shade of red that will trigger memories for both Ken and Rothko — and remind us that “red” can mean many things.

And, in fact, the meaning of “red” is a fascinating theme throughout the play. Director Steve Woodring elicits virtuosic performances from both players. Earlier in the play, there’s a scene where Ken has the temerity to offer Rothko a suggestion, the painter goes into a tirade. And the two join in battle in a kind of Mozartean “list aria” as they one-up each other with shades of red: a heartbeat, passion, wine, arterial blood, apples, tomatoes, rust on a bike, ruby slippers — the firebombing of Dresden…

Later, as Ken grows restive and begins to challenges Rothko’s authoritarian manner, both Meeks and Cooper open new doors into the minds and hearts of their characters. And in an extraordinarily rich moment of truth, a shade of red shapes the emotional climax of the play as well.

The production is also the first installment of the Bunbury-ShPiel Identity Theatre Project, which involves collaboration with ShPiel-Performing Identity from Chicago. The project will continue with more plays and a variety of education and outreach initiatives. For information, check with Bunbury.

Lynn Nottage is among the most influential and important theater artists of our time. She earned a MacArthur Grant in 2007 (that’s the one colloquially known as a “Genius” award). She is the first woman ever to win two Pulitzer Prizes for drama (most recently in 2017 for “Sweat.”)

She also happens to be an African-American whose extensive and varied body of work delves deeply into questions about race and gender in America.

Nottage’s play “Fabulation or, The Re-Education of Undine” tells the story of a successful African-American woman — a power in the glamour industry — whose life suddenly turns topsy-turvy. Her fall takes her back to her roots in a satirical exploration of identity. When it premiered in New York, it garnered great reviews and earned Nottage an Obie Award.

The UofL Theatre Arts Department, which is staging an entire season of plays by women, opens a production this Friday. It belongs on your calendar. •