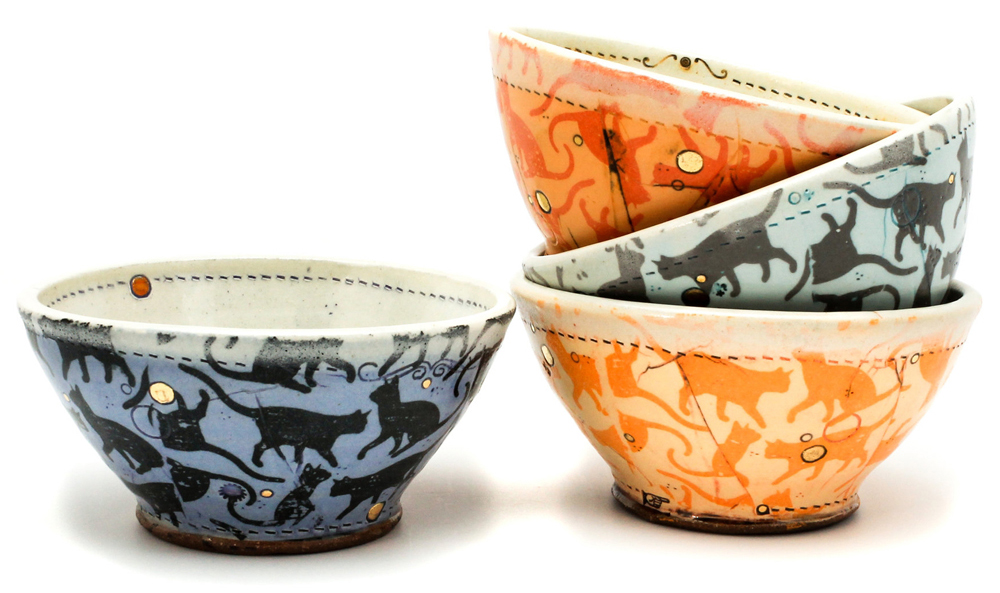 Pottery by Jason B. Burnett

Ceramicist Jason B. Burnett (mrbennyspotshop.com) is a cofounder of the Southern Crossings Pottery Festival (SXPF.org) on March 2-3 at Copper & Kings Distillery and Play Louisville.

LEO: What type of artist are you?
Jason Burnett: I consider myself an artist with a current focus on ceramics, inspired by printmaking and graphic design.

What is your earliest childhood memory that involved art?
My earliest memory? Most are a blur that involved cutting construction paper and a ton of glue. However, the time I feel that I connected with art was when I was a student at Holy Trinity somewhere between 1992-93. Our school was involved in a winter parade around downtown Louisville. We created a float, decorated costumes, built props, etc. I remember being in awe of how many people were involved in the entire process. It wasn’t until the end, when walking in the parade alongside our gingerbread float and carrying decorated candies, that I thought art was the coolest thing, from individual scale to that of a community-involved project.

You are a cofounder of the upcoming Southern Crossings Pottery Festival. Please tell us about it.
Southern Crossings Pottery Festival (SXPF) is an event influenced by other national festivals and potters’ markets. Louisville and our surrounding towns and cities have phenomenal contemporary potters, but not a whole lot of venues to highlight this particular group of makers. Not only do we have incredible educators and clay programs in our region, Kentucky MudWorks just opened up a sister location off Baxter Avenue. What we do not have is a nationally-recognized ceramics arts facility that educates the general public on this rich historical practice through lectures, clay workshops, strictly ceramic focused exhibits, etc. However, we may not have a large, thriving clay center — we do have all the important components needed to fulfill something similar without one.

SXPF is an opportunity to educate our region on its potters and where we are in the national landscape of our field, as well as how the handmade object such as pots, can make a positive impact in our own lives, but the lives of others.

For our inaugural, SXPF is hosting two events: a potters’ market consisting of nine potters that will be held at Copper and Kings Distillery. These potters reflect Louisville, our surrounding cities and a few nationally-known potters, and our event is something like the intersection of a curated gallery exhibit and a pop-up shop. We hope to have this event grow to 12 potters and will rotate artists every year or every other year. The second event is an Empty Bowls fundraiser to benefit A Recipe to End Hunger with over 150 handmade bowls created by local potters.

Having lived out of town for over 10 years, I have been disconnected from what all is going on in the Louisville scene till 2016 when I moved back with my family. When deciding to settle back in Louisville, I started looking for galleries that focus on ceramics or venues that highlight contemporary practices within our field and found little to none. I’m surprised because Louisville is the home to establishments like Louisville Stoneware, Hadley Pottery and many private studios. The choice of dedicating time and energy to build this was a no-brainer. We need to have an event that raises awareness of Louisville and our regions ceramic history and heritage, where we exist on a national level, educate our general public on studio practices and varying degrees of value and cost within ceramic and potter practices.

For Southern Crossings Pottery Festival, I cofounded and organize this event with Steven Cheek and Amy Chase — both who work with local arts organizations and are makers themselves. This event wouldn’t happen if it wasn’t for their knowledge and the support and inclusion from other clay establishment like AA Clay Studio, Payne Street Pottery, Kentucky MudWorks and many other potters and supporters.

After studying at the Arrowmont School of Arts and Crafts and Penland School of Crafts, how has your art changed over the years?
My art has changed often while figuring out a path to pursue. I went straight from Western Kentucky University to studying at Penland School of Crafts in 2009. I graduated from WKU while studying at Penland. I was uncertain if clay was a medium I wanted to be committed to or make a career out of, but after two years I just couldn’t seem to get away from it. Arrowmont provided a yearlong residency in 2012-13 that allowed for me to have uninterrupted time to really push clay and surface decorating that resulted in the opportunity to write the book “Graphic Clay.” Most recently I just finished a residency at Belger Arts in Kansas City, Missouri, where I have stepped away from how I’ve been making work for years to begin exploring a new direction in clay.

What do you want to do that you haven’t done?
Travel the world. I would love to be able to travel to different countries and cities. I’m embarrassed to say that I haven’t done much traveling outside the U.S. I’d love to visit Morocco. A friend and potter just visited and the use of ceramic tiles and geometric patterns are present everywhere. I’d love to see Africa, Japan, Ireland and visit factories and artist studios to get a glimpse of how ceramic culture plays a role in these countries. Finally, I am heading to China in 2020 to Jingdezhen for several months to make work with West Virginia University’s School of Art and Design.