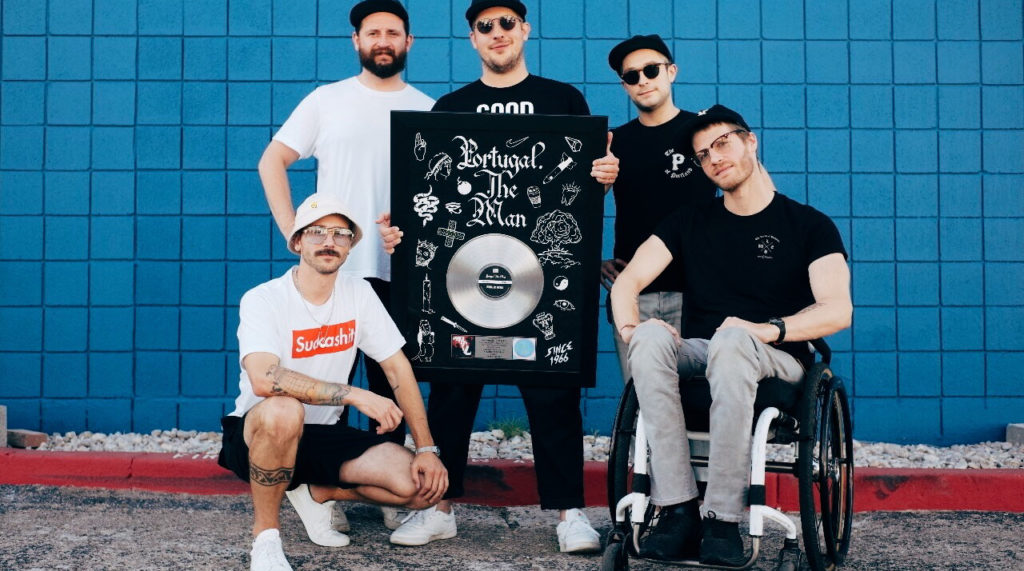 Portugal. The Man is neither a country nor a person, but rather a shape-shifting band with core members who first bonded over music and movies while growing up near the remote town of Wasilla, Alaska. Now based in the Lower 48 — Portland, Oregon, to be precise — they are enjoying widespread popularity due to the strength of their eighth studio album, Woodstock, and the runaway success of their ubiquitous single, “Feel it Still.” We recently caught up with founding member Zach Carothers by phone for a full report ahead of this week’s concert at the Louisville Palace.

LEO: How has the Alaskan wilderness informed your art?
Zach Carothers: It was everything for us. There was so much space to get to know ourselves without any outside influence. Then we all sort of became friends by hanging out in these abandoned missile silos, partying and turning each other on to music. In the winter, there was so much darkness that we ended up watching tons of movies together because there wasn’t anything else to do. Oddly enough, there were a couple of amazing video stores in our little community that had all these super-psychedelic cartoon films like “Fantastic Planet” and “Fire and Ice.” That’s actually how John [Gourley] and I communicate a lot of our musical ideas to this day. You know, I want this to feel like that looks when he’s spinning in ‘2001: A Space Odyssey’ or whatever.

You often come up with some pretty far-out bass lines. Do you attribute that to having started as a saxophone player?
For sure. Although it’s not always me on what you hear anyway because we don’t stick to what we do on stage when we’re in the studio. None of us are particularly good musicians, except for maybe Kyle [O’Quin], so we just sort of rotate roles and figure things out as we go.

What life lessons did you learn from Mike D. [who contributed to Portugal. The Man’s latest album]?
There were so many! He is such an amazing human being. And it was so cool to be in his studio with all the iconic Beastie Boys’ gear. It’s inspiring to consider how they took a bunch of low-end mismatched equipment including, you know, toy mics and shit, and made something totally rad out of it.

Another one of the producers you brought in for the Woodstock project was Danger Mouse. Did his Grey Album mashup [of the Beatles and Jay-Z] serve as a reference point for what you hoped to accomplish in respect to reinserting certain aspects of the 1960s into the present moment?
That’s really interesting. I never made that connection before, but on some level, it must have been on our minds. I’ve always been a big fan of the way that album forces you to confront contrast, and, obviously, it’s the one that put Danger Mouse on the map.

Speaking of the Beatles, how did your recent collaboration with Yoko Ono come about?
She apparently likes what we do, so she asked us, through mutual friends, if we would be up for working on a remix. We love doing remixes because it always takes us out of our normal headspace. We get to contribute to someone else’s vision without having to fully own it.

By modern standards, Portugal. The Man would be considered an extremely prolific act. How do you decide what to include in your performance set these days?
Ah, the paradox of choice. Each time around we have to find the right balance of songs that will make for a good party. The last time we were in town, our friends Cage the Elephant made sure we had plenty of bourbon. That always helps.