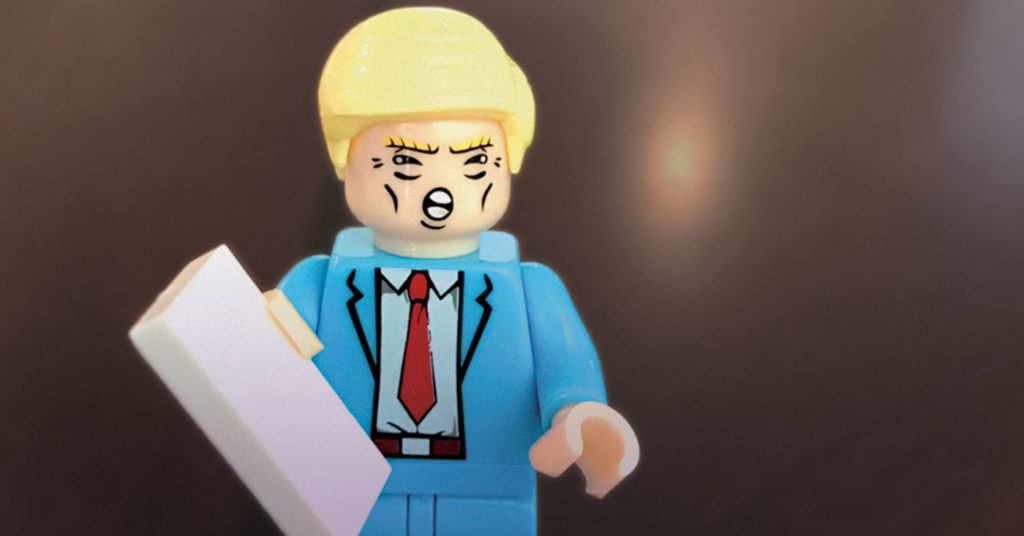 In an America divided into factions of Us vs. Them and Left vs. Right, what we need this Valentine’s Day is more love and less sociopolitical angst.

Instead of raging against our cyber-friends in tweets and ridiculous Facebook posts, we should take at least one day to be at peace. Share some chocolate. Pick some flowers. It doesn’t matter which party you belong to, because we can all listen to one another for at least a day, and we can all just get along.

And to that end, I bring you some lovely gifts you can give to your sweetheart on the right, that special someone who truly wants to Make America Great Again. And, hey, if you fall on the left, you can present these gifts as peace offerings to that guy you used to work with who keeps ranting on social media about Hillary’s e-mails. You really shouldn’t have typed what you typed, you know? And it’s time to unblock him in honor of the holiday of love.

You see, a friend recently shared with me an e-mail he received by accident, with the subject line, “God Made America Great. Guns and Donald Trump Keep it That Way.”

My friend somehow was added to a marketing list he never signed up for from Constitution.com, which blasts GOP-friendly news — “Trump’s Tough North Korea Talk Worked! Kim Calls for Unified Korea!” — and sells fun tchotchkes aimed at Trump supporters. What a great idea, I thought. What better to bring us all together than an online Right Wing gift store?

I immediately snatched up as many Donald Trump faux-Lego figures as I could from the website KeepandBear.com. “Our beloved 45th President is now available as a limited edition figurine,” the e-mail trumpeted. Not only does Little Trumpie come with a handy “Make America Great Again” cap (you have to remove the plastic hair for him to wear it), he also is holding a removable executive order! No, I am not making this up, and it’s yours for just $4.95. It’s a child-like peace offering of love and understanding.

If Lego isn’t your sweetheart’s thing, how about a bobblehead? Yes, they have a bobblehead of our “beloved” president, not to mention one of First Lady Melania Trump from a collection of four that also includes the Statue of Liberty and, for some reason, Ronald Reagan, who presumably is now rolling in his grave. Think of these as modern Kewpie dolls, like those our grandfathers used to win for our grandmothers at traveling carnivals.

Hey, it may be impersonal, but some prefer to give the gift of cash for holidays. Well, KeepandBear.com has you covered there, too, with your official, souvenir Donald Trump $100 bill. You can get one of those for just $4.95 (it’s gold-foil plated!), and maybe throw in an OPRAH bumper sticker (standing for Overrated Pretentious Racist Anti-American Hypocrite) for just another $3.95! Or get your NOprah ’20 sticker instead. (True, she hasn’t confirmed she’ll even run yet, but what says Valentine’s Day like throwing shade at a celebrity who dares to run for political office? The nerve, as if America would ever actually elect a puffed-up TV personality.)

Hey, maybe you’re more traditional. If so, that’s OK, because your Breitbart-addicted sweetie will be well taken care of for Valentine’s Day this year, thanks to the newest V-Day treat: chocolate ammunition. Yep, chocolate bullets for your one true love even come in their own metal ammo can: “Made from pure milk chocolate, these deliciously dangerous chocolate bullets will be sure to put a smile on your face! Each mini chocolate ammo can contains 20 rounds of chocolate bullets.”

And if you’d rather do widespread damage to your best girl’s (or guy’s) heart, why not splurge and go for the chocolate hand grenade, packed in its own wooden crate marked “explosives”? “Modeled after the MK2 Fragmentation Hand Grenade, this delicious milk chocolate hand grenade is a more peaceful way to resolve any conflict,” the soothing copy reads.

For that Feb. 15, next-morning afterglow, why not relax with some Double-Tap Coffee, which features four times as much caffeine as regular coffee. Four times! And it’s not like that over-priced, yuppie coffee that comes with sprinkles and whipped cream, either. To wit: “Not only is this some of the most powerful coffee you’ll ever taste, it’s also not made by an ultra-liberal company like most other coffee companies. In fact, it’s made by fellow conservatives just like you, here in the heart of Georgia.”

It warms the heart, doesn’t it?

As for me, I am eagerly awaiting the arrival of my Trump-urinating-on-a-CNN-logo sticker for my pickup truck: “LMAO! This sticker is frickin’ hilarious. What a great way to pi$$ off your liberal friends who think CNN is a reputable news source!”

Unfortunately, I don’t have a pickup truck. Heck, I don’t even have any automatic weapons. But I bet those bullets taste amazing dipped in peanut butter — if our newly-great Valentine’s Day is any indication of what lies ahead for ’Murica, it almost makes me hope the current presidency never ends. Almost.

For another Valentine’s Day-related article, check out the story “When love is (really) complicated: being asexual, aromantic, demisexual.”