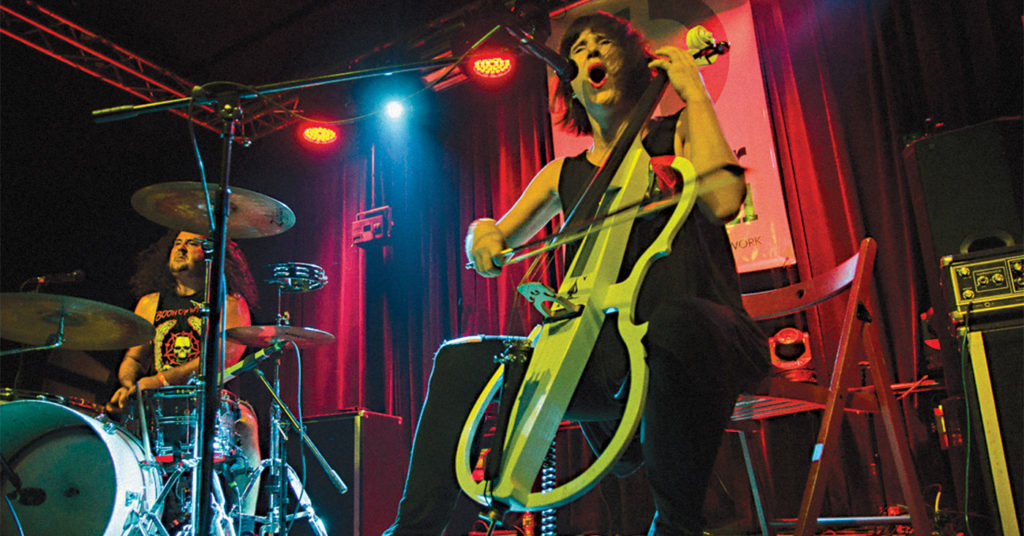 A conversation with the Cincinnati duo Lung can take a lot of turns. Cellist/vocalist Kate Wakefield and drummer Daisy Caplan — a Louisville expatriate and the former bassist for Foxy Shazam — weave in and out of topics like touring, the preferred temperature and flavor of pudding and the tacit sexism of Batgirl’s popularity. Playing more than 200 performances in 2017 alone, Lung takes their environment in stride, playing small towns, house shows with full-sized pigs and punk shows in the heart of bro-country fests.

“Sometimes we’ve played in rural spots in the South, where I was sure that I’d get some major backlash for the Brock Turner song that we do,” Wakefield said about their song “Brock” which will be on a forthcoming sophomore album this summer. “But at some of these shows, I get these really quiet older men, and they say, ‘I wish my 12-year-old daughter could hear your song.’”

“The thing about touring is it’s hard to know where the people receptive to what you do will be,” Caplan added.

Wakefield and Caplan met through Rachelle Caplan, Daisy’s partner. A visual artist, Rachelle Caplan not only tours with the band as possible but is working on the album art for their follow up to Bottom of the Barrel, Lung’s 2017 debut album, which is big and noisy experimental punk-leaning rock ‘n’ roll, undercut by Wakefield’s dulcet singing, and Caplan’s plodding, groove-oriented drums.

“There are a lot of women-identifying bands in town taking over our scene right now,”  Wakefield said. “It’s hard not to see at least one woman identifying band. I guess every scene changes a lot really quickly. Our scene is different than it was five years ago.”

See Lung with Second Story Man at Kaiju on Thursday, March 1 for Free at 9 p.m.